This article is over 11 years, 7 months old
As millions of gallons of oil turn the Gulf of Mexico black, Simon Basketter looks at BP and the causes of what could be the worst environmental disaster in history
Downloading PDF. Please wait...
Tuesday 01 June 2010

It’s hard to grasp the awesome scale of the catastrophe in the Gulf of Mexico caused by the Deepwater Horizon oil disaster. It is definitely the US’s biggest ever environmental disaster – and by some estimates may be the worst in world history.

Oil firm BP and the US government first claimed that a “mere” 1,000 barrels (42,000 gallons) a day have poured into the ocean. Then they increased the guess to 5,000 barrels a day.

The region’s fishing industry will be destroyed. The full effect of the spill on fish, birds and marine mammals will not be known for generations.

Oil is pouring into the deep currents of a semi-enclosed sea, poisoning the water and depriving it of oxygen so that entire classes of marine species are at risk of annihilation.

It is as if an underwater bomb has struck the Gulf of Mexico, causing some damage on the surface but destroying the living creatures below. And most of the methods to deal with this process have made it worse.

The reason for the different estimates on how much oil has leaked is money. Under the US Clean Water Act, BP could be fined up to £3,000 for every barrel of oil gushing into the Gulf. If its lower estimates are accepted it will save BP millions of dollars.

So it was not just arrogance that led Tony Hayward, the boss of BP, to claim, “The Gulf of Mexico is a very big ocean. The amount of volume of oil and dispersant we are putting into it is tiny in relation to the total water volume.”

BP won’t even say how much oil it thinks is in the field it was exploring. It claims this is commercially sensitive information.

The 20 April explosion happened because BP was in a hurry to seal off the oil well so it could move the rig to another drilling location. Eleven workers died as a result.

BP, which has boasted of its success in boosting oil production in the gulf, has a sordid history when it comes to safety. Last October it was fined $87 million (£60 million) for failing to correct safety problems discovered after a 2005 explosion that killed 15 workers at BP’s Texas City refinery.

Like every other oil company, BP has also sought a blanket exemption from requirements that it conduct an environmental impact assessment for each new offshore well it drills.

BP and its subcontractors were able to drill because the US government, under George Bush and then Barack Obama, encouraged them.

Obama has been critical of his predecessor’s environmental policies and promised to place fresh emphasis on developing alternative fuels – but nothing changed.

In 2009 BP spent nearly £11 million on lobbying the US government – and the leases for offshore drilling in the Gulf kept flowing.

Oil drives the global capitalist economy, and the competition for this “black gold” breeds conflict and corruption.

A handful of massive corporations and producer countries control the industry, backed to the hilt by powerful states – and they are willing to organise coups and wars in the pursuit of profit and power.

Even on its very best day, the oil industry is a series of violent, toxic horrors. Drilling, shipping, refining and burning oil is destroying the planet – at the local level through poisoned air and water, and globally by fuelling climate change.

The latest disaster is merely an extreme version of this norm in which accidents and pollution are routine. In January a tanker collided with two barges at Port Arthur, Texas, dumping 450,000 gallons of oil into the gulf. In Ecuador, Texaco leaked 19 billion gallons of toxic wastewater and 17 million gallons of crude oil in pristine forests.

And there are echoes of a 1979 accident off the coast of Mexico that caused what was the world’s worst oil spill – until now.

Both then and now, natural gas flowed unnoticed into the well being drilled, causing an explosion. And, then and now, the same critical piece of fail-safe equipment failed – the blowout preventer.

The 1979 Ixtoc spill belched crude oil for 297 days. And, importantly, it continued to leak oil more than three months after the spill was “fixed”. Mexico’s Ixtoc well was only 150 feet below the sea surface. The current Deepwater Horizon disaster is 5,000 feet deep.

The scale of the catastrophe is prompting some newspapers to call it “Obama’s Katrina”.

More than a month since the start of the disaster, the US government has been completely unable to get a grip on it.

Obama says BP will pay “every cent” of the clean-up cost. But it was his administration that last year intervened to support the reversal of a court order that would have halted offshore oil drilling in the Gulf of Mexico.

Obama’s interior secretary Ken Salazar named an example of an important project that must be allowed clearance – BP’s Deepwater Horizon.

BP started as the British Persian oil company, exploiting the oilfields and markets of the British empire.

The carve-up culminated with secret agreements between the major companies to ensure their profits.

Throughout the oil company’s history, its desire for profits and control led to the disaster of imperialist intervention and wars in crucial parts of the world, particularly the Middle East.

The British multinational is the third largest global energy company and the fourth largest company in the world.

The total cost of the cleanup will be $760 million – but for BP that is just 12 days’ profits.

The great toxic clean up

Marine scientists have discovered a massive new plume of oil, stretching 22 miles from the leaking well.

It is the second such plume discovered by independent researchers within weeks.

Some believe it may be from a second leak. But a more likely scenario is that it is caused by the attempts to clean up the mess.

The main method used to “clean up” the spilled oil is chemical dispersant.

Oil company crews are injecting the surface of the oil slick with toxic dispersant chemicals, which are designed to break up the oil.

This can do more harm than good. It hides the extent of the catastrophe by dividing the oil into smaller parcels that sink to the seafloor.

The Gulf of Mexico is filling with globs of heavy, black oil that will be harder to clean up – and will be carried to shore on currents and tides for decades to come.

BP is pumping a dispersant called Corexit – which it helped develop – into the sea.

The US government told the company to stop using Corexit as it is more toxic than competing products, but BP has ignored this.

The US Coast Guard recalled all 125 fishing vessels working on cleaning up the oil spill last week because the workers on the ships became ill.

BP made workers sign waivers saying they wouldn’t sue before they were given work in the clean-up operation.

Marine toxicologist Riki Ott said the chemicals used by BP can wreak havoc on the body and even kill.

“The volatile, organic carbons, they act like a narcotic,” Ott said.

“At high concentrations, we learned in Exxon Valdez from carcasses of seals and sea otters, it actually fried the brain [and there were] brain lesions.”

Why did it happen?

The cause of the oil spill is simple – the pursuit of profit at all costs.

BP has tried to pin the blame on the survivors of the disaster. But the real culprit was the firm’s cost-cutting.

The explosion on the Deepwater Horizon rig came after the well was capped with a cheap type of casing, produced by Halliburton.

BP rushed as it was leasing the rig for half a million dollars a day.

Rig chief mechanic Douglas H Brown told a US investigation that BP was constantly pushing for work to be speeded up.

BP has known of the problems with rigs’ safety preventer valves for ten years – but wouldn’t spend the money to fix the problem.

BP’s official response plan for oil disasters in the Gulf of Mexico is studded with inaccurate nonsense – but was approved anyway.

The “BP Regional Oil Spill Response Plan – Gulf of Mexico” lists “sea lions, seals, sea otters [and] walruses” as “sensitive biological resources” in the Gulf. None of these animals live anywhere near it.

It also gives a website for its “primary equipment providers for BP in the Gulf of Mexico Region [for] rapid deployment of spill response resources”. The link leads to a Japanese home shopping website.

But there is some honesty. It directs media spokespeople to never make “promises that property, ecology, or anything else will be restored to normal”.

The US oil drilling regulator, the Minerals Management Service (MMS), was a tool of the oil companies.

It provided leases without making the companies, including BP, obtain required environmental permits.

It has approved 27 new offshore projects since the Deepwater Horizon explosion – and 26 were exempt from review.

The reason is simple. An investigation into MMS found “a culture where the acceptance of gifts from oil and gas companies was widespread”.

Some MMS inspectors had allowed oil company officials to fill out inspection forms. The inspectors would then sign the forms and turn them in as their own.

In 2008, one inspector used his government email to conduct job negotiations with Island Operating Company (IOC), an offshore oil services company he had repeatedly cited for breaking safety rules.

After the employment negotiations began, he conducted four inspections of IOC oil platforms, none of which resulted in any criticism. Soon afterwards, IOC hired him.

Asked if he ever takes bribes, another former inspector said he didn’t – but added that he did take “gifts’” from “good friends that I wouldn’t write up anyway”. 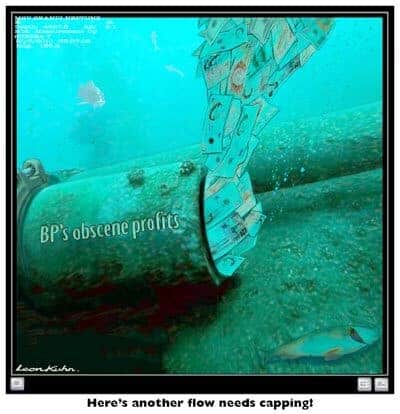 Oil still gushing into deep water in Gulf of Mexico