This article is over 12 years, 1 months old
For weeks now students have shown that they are capable of organising themselves – and not only in Austria. More than 100 working groups have grown out of the occupation at the main university in Vienna.
Downloading PDF. Please wait...
Tuesday 08 December 2009

For weeks now students have shown that they are capable of organising themselves – and not only in Austria. More than 100 working groups have grown out of the occupation at the main university in Vienna.

They involve thousands of students in that university alone.

One group publishes a newspaper. It holds public editorial meetings and collects money to finance the paper – then distributes it at the university, in the subway stations and around the city.

Another group organises the cleaning of the occupied lecture halls. Every morning they clean together with the university workers.

From the first day our food supply was a priority. There is a kitchen in a room close to the main lecture hall, which we also occupied. People cook there daily and get donations from local bakeries and other local businesses and individuals.

There are working groups responsible for the security inside, in case members of right wing student fraternities or police try to enter and attack the occupation.

The police can only be granted access by the rector of the university. The right wing People’s Party of Austria asked the rector to evict students from the main lecture hall in Vienna last week.

The rector rejected the eviction proposal because he respects negotiations with the plenary meeting of the students, where mass democratic discussions and decisions take place.

Although there are less people occupying the lecture hall now than at the beginning, this does not mean that there is less support for the movement. If police attempt to evict us we can contact thousands of students that are on regularly updated text and email lists.

Since there are new people getting involved at every protest and plenary meeting in departments, the important thing is to build up structures there that work.

Looking ahead, we must not confuse the occupations with the movement as a whole. As important as the occupations are for having room to organise and debate our strategy – it is the structures that have developed and still are developing that mean we will able to fight back when the next attacks come.

This is an international movement, where protests in one country influence those in others, and where we exchange experiences and impose pressure upon governments on a global scale – and show our strengths on the streets. 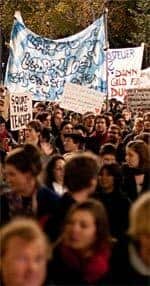 Voices from student occupations in Austria and Serbia 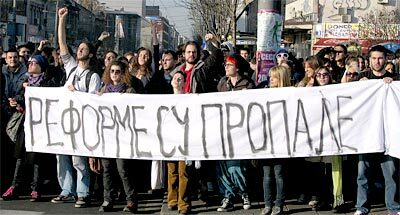 Matija Medenica, Belgrade university - ‘Pull together all who are being made to pay for the crisis’ 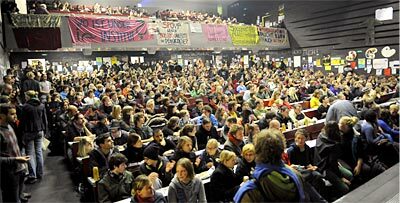 Photo of the Austrian student occupation