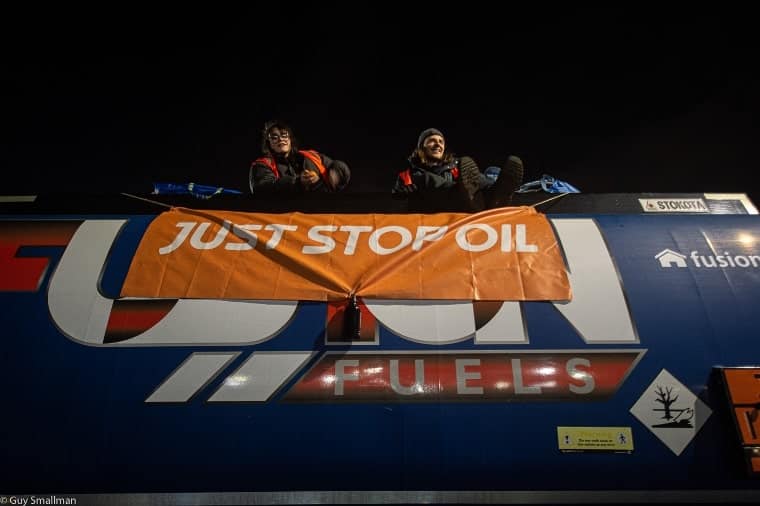 But the ritual denunciations quickly followed. Tory MP, Tobias Ellwood called the protests “deeply irresponsible”. He added, “The hardship this will inflict will be ­life threatening and put people in danger.  “They are actually playing into Putin’s hands to sow discord in the UK when our priority is to stand up and support Ukraine.”

That would be a much better description of the impact of fuel price rises rather than blocking oil depots for a few hours. We can expect much more backlash when XR launches its rebellion this weekend.

Whenever people take direct action—using their own power and activity to force change to happen—there’s the same message.  The ruling class says the only legitimate response to any issue, however urgent, is to lobby your MP and vote when you have the chance.  Protests are allowed but only in a certain manner under the soon to be passed police bill. Its model is softly spoken, police-herded demonstrations that don’t delay traffic.

Cressida Dick, who last month resigned as Metropolitan Police head, was intent on crushing groups such as XR. She said ever since the first rebellion she had been in talks with Tories about how police could grab more powers to smash them off the streets. There is a problem with direct action—there isn’t nearly enough of it.  We would be in a much better state if increases in gas and electricity costs had been the trigger for the sort of ­protests seen in Chile in 2019.

People met a rise in subway prices with fires at metro stations, mass demonstrations and strikes. The result was a fall in prices—and a government forced to concede a new constitution as an alternative to a revolutionary challenge.

Direct action can hit bosses and the government hard. The school climate strikes and XR’s action forced climate issues into the news far more effectively than parliamentary debates. When XR activists blocked the distribution of right wing newspapers in 2020 at two sites they stopped the circulation of 3.5 million newspapers. When 15 activists locked themselves ­underneath a Boeing 767 at Stansted airport in 2017, they stopped the deportation of 60 people. Many of those people are still in Britain today.

When protesters toppled a statue of slaver Edward Colston in Bristol in 2020, they achieved more in minutes than petitioning and lobbying the council had for decades. These victories were all won because ordinary people defied the law and worked outside the methods of protest that the state permits.

Socialists should celebrate the disobedience of Just Stop Oil and XR. We won’t get to where we want to be without many more insubordinate confrontations similar to the Yellow Vests in France, the resistance ­committees in Sudan and the tearing down of monuments to slavers and colonisers.

But applauding those who confront the state is not enough. For one thing, direct action can be used for many different ends. The storming of the Capitol by Donald Trump supporters in January 2021 was undoubtedly a form of direct action. They brazenly rejected the political methods sanctioned by the establishment. 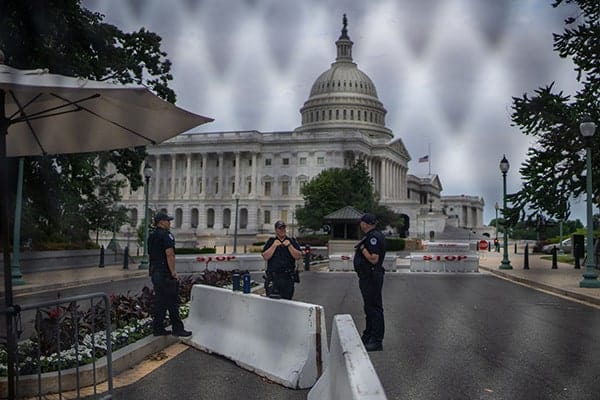 But the aim was utterly ­backward—the hope of creating a path for Trump to stay president despite losing an election. The form was radical, the content was reactionary.

In other cases, even people in the environmental ­movement who genuinely want to see a challenge to the Earth ­destroying capitalist system can see it as directed towards ­jolting a section of the establishment into discovering their own best interests.

Here the form is radical but the content is thoroughly reformist. So radical direct action at its best is linked to radical ­content. That means trying to organise a mass movement of organised workers—local strikes, sustained strikes and general strikes.

That’s because the most powerful weapon against capitalism is when workers stop producing and cut off the source of profits. It’s not the only form of struggle, but it is the one that can have the biggest effect. And in the course of mass strikes workers can change themselves at the same time as they shift the society around them.

Direct action and strikes together are a mighty combination. Take the example of P&O which has ended in such an appalling defeat with 800 jobs gone. Sticking to tactics allowed under the anti-union laws and the laws about protests failed.

Instead of being limited by such methods, a leap into much bolder and more radical forms was needed. Direct action could have played a central part in this. The most hopeful moment in the fight against job cuts came right at the start when ­workers launched a very effective form of direct action—refusing to leave the ship and occupying them.

This both challenged the bosses’ control of valuable assets and created the possibility of a focus on wider protests.

No wonder P&O speedily dispatched tooled-up security guards to drag workers off the ships. Regrettably, there did not seem to be any concerted effort by union leaders to ­prevent such expulsions. 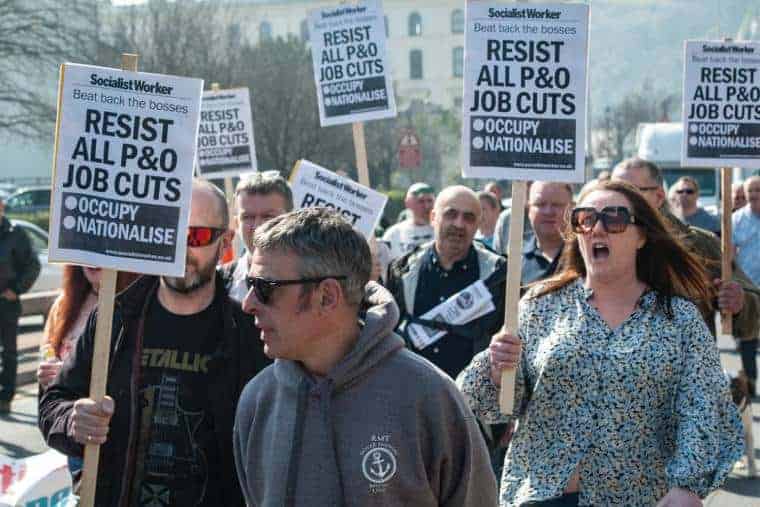 Even then, the RMT union, the TUC union federation or a combination of unions could have set a day for workers and students to block the ports. Such a call might easily have seen 1,000 people or more outside a number of these key trading hubs.

This would have mirrored the best of XR’s tactics—mass involvement—than the much narrower and secretive methods favoured by groups such as Palestine Action. Of course the police would have moved in to clear the roads, potentially making mass arrests. This might have intimidated some people but could also have spurred even larger mobilisations.

It’s even possible that ­mushrooming protests—illegal and almost certainly denounced by all the main political parties—could have caused a political crisis for the government. Direct action would have injected a much-needed sense of militancy and defiance. It would have shown a readiness to do more than complain about the Tories and the bosses.

But there would then have come a further challenge. Probably only workers’ action could have stopped protesters from being beaten down by repression. Emboldened by the port blockades, workers might have pushed their union leaders into moving to walkouts on the ­railways, the London Underground and to win solidarity in other areas.

Or workers might have been able to organise such action through rank and file communication whether their union leaders wanted it or not. Such uprisings don’t happen spontaneously. It usually needs someone or a group of people who are rooted in the struggle to argue to link the anger on the streets to the power in the workplace.

None of this means ­waiting for trade union leaders to change from their fearful refusal to take the gloves off. The XR protester who is part of a big road blockade is doing more than the union official who makes a speech about workers’ action and socialism but then runs away from the action.

Moving a motion at the trades council over P&O is a good thing. But just because it has a faint echo of workers’ organisation, that doesn’t make it an alternative to direct action. It’s never enough to say “involve the unions.”  That can mean trapping the outrage of the streets in the grip of the union leaders. We need militant workers’ struggle, fighting unions, and leadership that consciously chooses the route of confrontation rather than the one of compromise.

Let’s be inspired by the sort of direct action we see from environmental and Palestine activists and push for more of it. It can become the basis for organising a breakthrough in the revival of working class power. 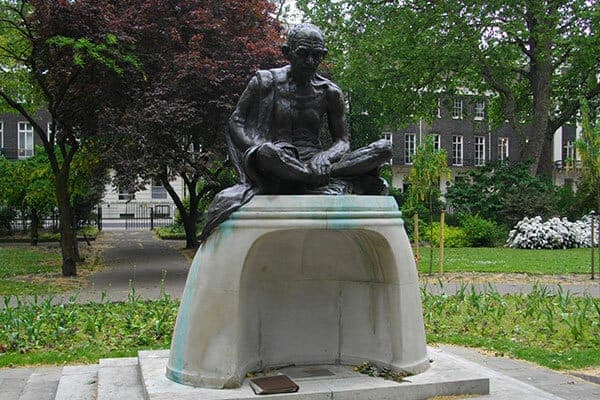 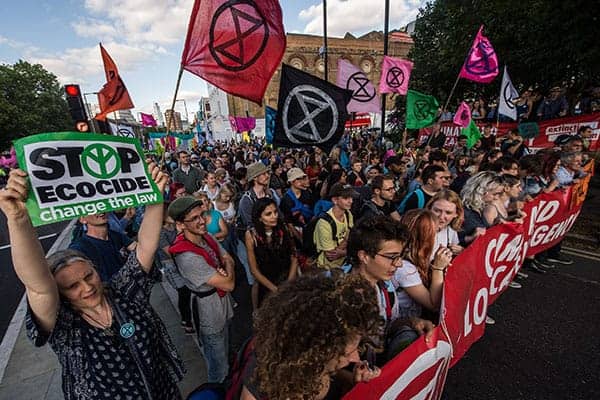 Should we blow up pipelines? 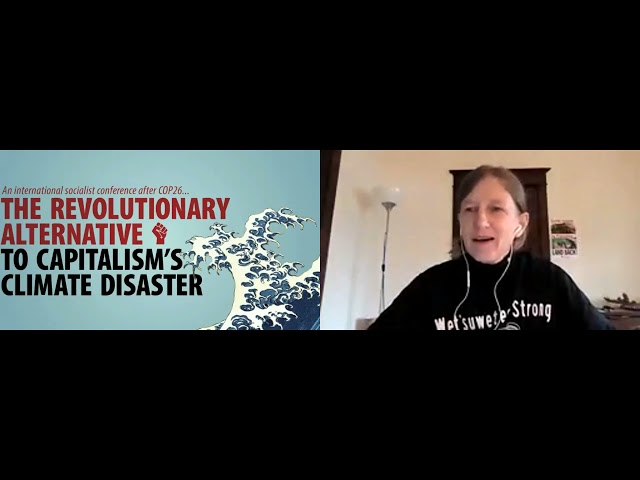