Dubious practices behind the closure of Visteon UK

Outsourcing is the business model that human resource managers love. It is what lies behind the sacking of around 600 workers at the Visteon car components company, which is a supplier to Ford, and countless other companies.

Outsourcing enables the bosses to cut hours, wages and jobs while holding onto profits. It even enables them to run companies into the ground while still making money.

Outsourcing has a simple logic. To cut costs companies strip out functions and hawk these out to other firms. These then compete to offer the lowest cost on the basis of squeezing workers even harder than the core employer.

At the same time, outsourcing hides the true nature of companies and how much they are worth.

One business analyst described the process of Ford’s outsourcing programme like this:

“Outsourcing reduces costs both in the near term as well as in the long-term.

“In the near term, the company is not constrained to continue to use costly in-house manpower. Also, it becomes possible to arrive at bargained negotiated prices while dictating quality norms.

“In the long-term, the company avoids pension, healthcare and other employee longevity related costs.

“The company also saves on the costs of obsolescence of facilities, which are no longer required.”

The other advantage of outsourcing is the multinationals’ accounting trick of “transfer pricing”.

As the analysis of Ford puts it, “From the tax and cash flow angle the company saves on transfer pricing related tax outflows – taxes levied on income, manufacture and sales.

“All the planning and ingenuity which goes into financial engineering in these areas gets saved.

“These time and cost resources can be productively used for other processes.”

More simply, the company can move money around the world from company to company, so paying as little tax as possible.

Profits are declared in the countries with the lowest tax rates and debts are declared elsewhere. Most multinational corporations do this to avoid tax.

By increasing the number of companies, more money can be moved around and the more difficult it becomes to see what the actual value of a company is.

The drive towards outsourcing originates with the success of the Walmart supermarket chain in the US. Walmart grew by undercutting its competitors as it bought its goods from suppliers in the Third World that it wholly or partly-owned.

The motor industry took note and developed outsourcing to an art form. General Motors spun off a company called Delphi in 1999 and Ford created Visteon in 1997, which was then outsourced in 2000.

This had two immediate benefits for Ford. First, it moved its debts into other companies.

Further, it meant that the outsourced company was supposed to compete in order to get contracts. This drove down costs.

In 2005, Ford launched its “Way Forward” plan, which pushed outsourcing into overdrive.

The company announced that its spin-off companies would have to charge what it called the “China price” – the cost of buying the product in China – if they wished to keep contracts.

The “Way Forward” plan says, “Improved quality will be achieved, in part, through the ‘Aligned Business Framework’ agreements with select strategic suppliers.

“The agreements are designed to strengthen collaboration and create a more sustainable business model for both Ford and its key suppliers to improve mutual profitability.”

This translated into more outsourcing and more cost cutting. One Ford manager described how this worked: “It’s a challenge. Sometimes, one supplier wants to do things differently – such as pay their workers more – but we lean on the supplier.”

The head of Ford human resources said, “As hard and painful as it is to idle plants and reduce our workforce, we know these sacrifices are critical to set the stage for a stronger future.”

Since the plan was announced, Ford has halved its global workforce, getting over 70,000 workers off its books, by either sacking them or outsourcing the work.

The outsourcing trick is set to continue. The “One Ford” plan was announced in January. This says that the company will “aggressively restructure to operate profitably”. The key to this is “further reducing salaried personnel-related costs”.

The “sacrifices” will not take place across the board. Alan Mulally, Ford’s president and chief executive officer, grabbed an obscene $13.6 million dollars in salary and rewards last year. 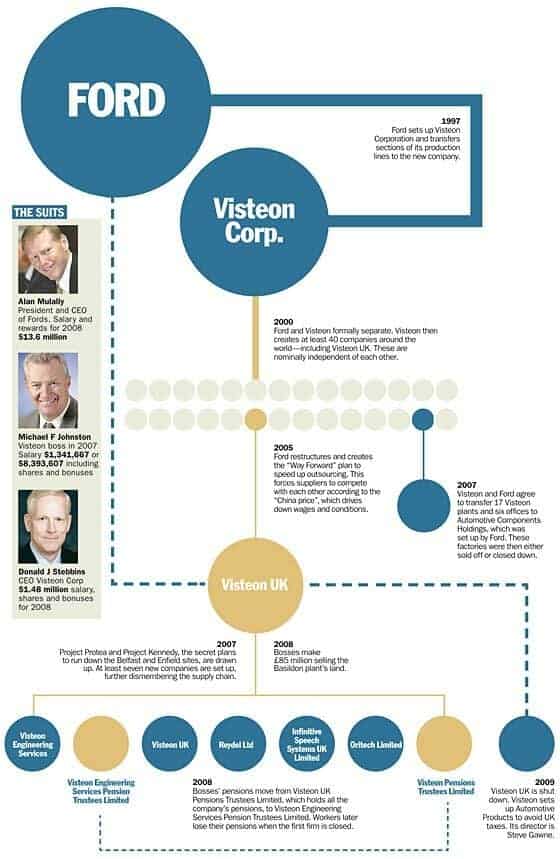 How Visteon profited out of failure