‘I suppose you could say I was born to resist.” This is how Ennio Odino summarises his remarkable life.

Ennio was one of hundreds of thousands of Italians to join the partisans – those who fought to liberate Italy from fascism.

He survived the horrors of a Nazi concentration camp. Today he is committed to warning a new generation of the reality of fascism.

His father had fled the country a few months earlier as his life was in danger after speaking out against fascist leader Benito Mussolini.

Ennio’s father returned to Genoa and set up a food shop, but spoke up again when war broke out in 1940. The fascists responded by torching the shop.

Ennio got a job in the offices of a local weapons factory. He quickly got involved in anti-fascist sabotage with fellow workers.

In September 1943 Italian fascism collapsed. The war was a disaster, and Mussolini was arrested in a palace coup orchestrated by other fascist leaders.

A month and a half later the new government fell apart and an armistice was signed with the Allies. German troops stationed through much of the country became an occupying force.

The Italian army collapsed. Ennio had been drafted into the army and, like hundreds of other soldiers who now had no orders, he simply took off his uniform and left.

Back in Genoa Ennio got involved in anti-fascist activity with his father, collecting weapons and helping other soldiers to get back home.

But when the Nazis put Mussolini back in power, young men such as Ennio were being rounded up as deserters.

It became too dangerous to stay in the city so Ennio joined a partisan guerrilla unit in the mountains.

Unfortunately he and dozens of other partisans were caught by the Nazis.

They were held overnight in the chapel of the Benedicta – an ex-monastery that had been transformed into the headquarters of two partisan brigades.

Ennio calmly recounts what happened next: “The Germans came for us at dawn, and said they wanted five men to walk ahead of them in mine clearing. Nobody moved.

“But when they chose our captain, a 54 year-old married man with children, we all moved forward and they chose the first five.

“After a while we heard some gunshots coming from outside. They came back and got another five, and ten minutes later we heard more gunshots.

“I went out in the fifth group. I saw five men in a heap and thought it was a trick to make us talk.”

The reality turned out to be far worse – they were facing an execution squad.

“I was helping to support a comrade who had been wounded, so when the firing squad fired he protected my right side, so I was only hit twice on the left, and my friend fell on top of me.

“Then on the hill above us other shots rang out – it was a group of partisans who were trying to save us. It was enough to force the German soldiers back.

“I crawled out from under my dead comrade and left the area. I managed to stem my bleeding with a handkerchief, hid under some leaves and slept.”

Ennio was recaptured the next day, and sent to Mauthausen concentration camp in Austria. He was just 19 years old.

He recalls, “They shaved us, then washed us with petrol or something.”

They were given prison rags. Ennio and others had to sew on a red triangle to show they were political prisoners. He was given a metal bracelet on which his new identity was written – the number 63783.

Ennio says the prisoners slept on the floor “like sardines” on mattresses made out of dried leaves.

Food was scarce – they were often reduced to stealing the food the Nazi guards gave to their dogs.

The average survival time in the camp was just three or four months.

But despite being forced to do heavy labour, Ennio somehow survived a year.

Like many concentration camp survivors, Ennio had trouble adjusting to normal life. Eventually he got married and had children. He found a job at the European Parliament in Brussels.

Ennio’s anti-fascism never left him. In the 1970s he helped to stop the Italian fascist leader Giorgio Almirante from speaking in Brussels.

In recent years he has often spoken in schools.

He is horrified by many of the policies of Silvio Berlusconi’s government in Italy. And he is angry about attempts to cancel out the history of the partisans and deny the truth about fascism.

Ennio Odino will be speaking at the Unite Against Fascism conference » www.uaf.org.uk

Why the Nazis hate democracy 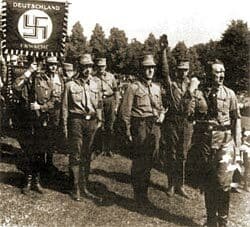