Epic battle in Wisconsin is a taste of our power

This article is over 10 years, 10 months old
Siân Ruddick looks at the stuggle in Wisconsin, which is changing the US
Downloading PDF. Please wait...
Tuesday 01 March 2011

The battle in Wisconsin has seen hundreds of thousands of US workers rediscover their power. In the most powerful protests for many years, public sector workers—with the support of students, war veterans, pensioners, local campaigners and even some police—have brought the city of Madison to a standstill.

They have shown the US right that they will face determined resistance to any attacks they try to push through.

The demonstrations in Wisconsin, a north eastern state in the US, began on 15 February. They came after Republican governor Scott Walker planned to push through a bill that makes huge public sector job cuts and revokes workers’ collective bargaining rights.

But Walker misjudged the mood. The US workers’ movement has been quiet in recent years. But those in Wisconsin have moved into action as the economic crisis devastates the lives of poor Americans and the Republicans aim to smash the public sector.

Many unions support the Democrats, and believe that attacks are an attempt by the Republicans to smear Barack Obama for all the problems people face.

The protests began after the Teaching Assistants Association (TAA) union recruited thousands of people to testify to the joint finance committee in the Capitol building on 15 February.

Every speaker is usually allocated two minutes. Initially, the committee stuck to its usual practice, calling speakers until sometime after midnight when it adjourned the procedures.

But instead of leaving, workers and campaigners continued with the hearing, taking in hundreds of speakers defending services, and beginning an occupation of the building that was ongoing as Socialist Worker went to press.

While some spoke, others began to organise—bringing in food and sleeping bags, and phoning the press and putting out calls for people to join them. And thousands did.

Paul Golueke, a 24-year old social worker from Milwaukee, said, “I’ll stay here as long as it takes. Scott Walker doesn’t understand our passion. The eyes of the nation, of the world, are on us and we can’t back down.”

The inspiration of the events in Wisconsin has spread across the US. Workers have marched against budget cuts in 50 states and there are strikes planned if the changes go through.

The huge show of workers’ strength has stymied Walker’s bill.

If it passed it would end the automatic deduction of union contributions from workers’ pay cheques.

It would also force employees to increase their payments for healthcare and pensions, and slash Medicaid and BadgerCare, the healthcare programme for children from low-income families.

Trade unionists from across the country have sent their solidarity to those fighting.

Jeff Skiles, the US Airways co-pilot who helped safely ditch a packed passenger jet on the Hudson River in New York City in 2009, spoke to the occupation.

He said, “On that day, there were many, many heroes—pilots, flight attendants, traffic controllers, firemen, policemen, folks in the ferry boats, emergency medical technicians.

“We all worked together to save everybody. That’s a lesson that people in this Capitol building need to learn—every one of them was union.”

The scale of the attacks has led many to join the fightback.

“So if you live in the state of Wisconsin, you have to stand up and say no. That’s democracy.”

Retired teacher Jack Dwyer said, “Working people need to stick together, otherwise powerful forces in the country will drive us down and pay us as little as possible.

“We’re all part of the working class and we’ll sink or swim together.” 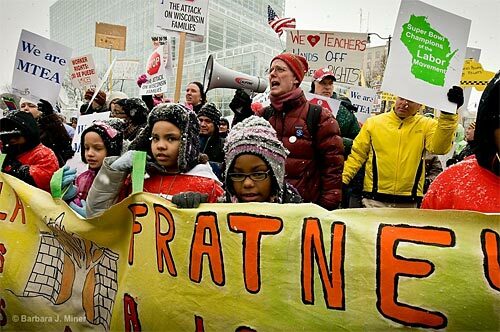 Wisconsin - how we built a mass movement 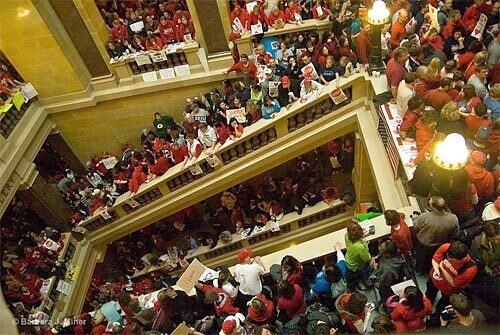 Republicans and bosses are watching Wisconsin