Examples of the US ‘liberation’ of Afghanistan

This article is over 11 years, 8 months old
In our contemporary world where the visual message trumps the written word, photos of those killed or wounded by US/NATO actions rarely are published. They generate too much discomfort. But reports by journalists like Lynsey Addario and Alex Linschoten show the reality of what has been happening
By Saiqa Ali, Human Rights MA student at The Institute of Commonwealth Studies
Downloading PDF. Please wait...
Friday 23 April 2010

In our contemporary world where the visual message trumps the written word, photos of those killed or wounded by US/NATO actions rarely are published. They generate too much discomfort. But reports by journalists like Lynsey Addario and Alex Linschoten show the reality of what has been happening

In a rare example of independent photojournalism, Lynsey Addario published photos of some wounded victims of US/NATO actions in Afghanistan. The first photo shows Gul Juma, 9, who lost her arm in a NATO attack in Sangin village in December 2008. The second photo shows legless Rabia, 70, living in a Kabul refugee camp whose husband and son were killed by NATO forces. The third photo shows Syed Mohammad, 67, in his home in the Hotkheil neighbourhood of eastern Kabul. US. Special Forces and their Afghan satraps burst into his home and executed four members of his family.

On the other hand, non-American media in war-torn regions and European media are more likely to publish photos of those wounded or killed by US/Nato forces. For example, the attack upon Syed Mohammad’s home which killed his four family members at midnight of 31 August/1 September 2008 was reported upon by Pahjwok Afghan News and a photo of the victims was published. Reuters, Agence France Presse and Quqnoos.com published photos of the victims.

The incident was described in the Afghan Victim Memorial Project with accompanying photos. US forces raided the mud-walled home, blasted open the gate with explosives and stormed into the home. The occupation troops fired weapons killing a father, Noorullah, his two young sons, and wounding his wife. A neighbour, Abdul Wakil, told the Deutsche Presses Agentur, “The two dead children were 2 years old and 9 months old. Did the soldiers think they were terrorists? Or they knew that one day they will become Taliban? Then they should kill us all.”

Mrs Noorullah died in a hospital at 11.30am from her wounds. Tolo TV, a private Afghan channel, showed footage of the dead bodies surrounded by angry protesters. Predictably, “the US-led coalition denied any involvement in the attack.” The attack was probably carried out by a team of US Special Forces, operating outside of the usual command structures.

Reportage on the victims of the US bombing of a wedding in Shah Wali Kot in early November 2008 was posted by an independent war reporter on the road, Alex Strick van Linschoten. He interviewed and photographed victims of the deadly US attack at the Mirwais Hospital in Kandahar and produced a remarkable set of photographs of the injured victims.

“The bombing, they said, lasted from 4-9pm. Noor Ahmad, Hazrat Sadiq and Mohammad Rafiq all lay on beds in the hospital next to Abdul Zahir. Between 3 and 5 years old, they are the cousins of Abdul Zahir and were injured in the bombing. Of Abdul Zahir’s relatives, 8 people, he said, were killed and 14 injured. The dead in his family included 1 cousin, 2 brothers (called Qahir and Twahir), his grandmother and his uncle’s mother.

‘The bombing, witnesses said, wasn’t the end of their ordeal. At approximately 10pm, ‘the Americans’ came to their village and bound all their hands with plastic restraints and held them there for questioning. ‘Panjshiri’ interpreters working with the Americans kicked them, they said, and translated what the Americans were saying. ‘If you fire one bullet from your village,’ they said, ‘we will destroy your village.’

‘Now I don’t necessarily believe this. In these kinds of events it’s an unfortunate fact that the reality starts to get shaped and distorted almost as soon as they happen. Rahmatullah, another man present in Wech Baghtu (the village that was bombed), claimed that the translators had robbed them after tying them up. ‘They took 200 Afghani [about $4] and my mobile phone and all the papers from my pockets,’ he said. Rahmatullah’s son Hekmatullah died in the bombing, he said, and his wife was injured.

‘Due to the sensitive nature of interactions with women in Kandahar, I was unable to visit any of the female victims of the attack. It is especially frustrating in the case of this bombing, since all witnesses said that 95% of the victims were women. Weddings are segregated in the villages in Kandahar, with women in one area, and men in another. It seems that the bombs struck the women’s section of the wedding.

‘Two villages seem to have been affected by the bombing – Wech Baghtu and Tor Gharak. ‘Americans’ came to take pictures after the bombing apparently, said one witness. I glimpsed the bride through a crack in the door of a room. She, her brother told us, was also seriously injured. Hospital intake statistics showed that 16 males had been admitted to the hospital with injuries from the bombing. I’m not sure how many females, because I didn’t make it to that part of the hospital.”

For more reports and pictures please see the Revolutionary Association of the Women of Afghanistan website » www.rawa.org/temp/runews/rawanews.php?id=938 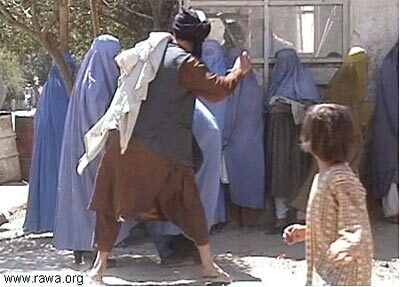