Exclusive: We reveal what is happening in scab mail centre

This article is over 12 years, 2 months old
Protesters at temporary Dartford centre find tags from redirected mail and even a letter in the rubbish
By Siân Ruddick
Downloading PDF. Please wait...
Wednesday 28 October 2009

At 5am this morning, a group of around 20 workers and students gathered in Dartford.

They were there to leaflet the Dartford Outhouse, or the Dartford Diversion – a centre set up by Royal Mail to sort post and attempt to decrease the backlog of mail built up by the highly effective London CWU post strikes.

The centre employs around 250 workers, through Manpower and Reed agencies, on low wages to sort the mail. The workers have been told that they are Christmas casuals, but Royal Mail usually doesn’t employ these until November, and Dartford, and the five other centres like it across Britain, have been in operation since September.

As the activists, many from the Right to Work campaign, approached the doors of the centre at the dead end of an industrial estate they were greeted by the cheery faces of Royal Mail managers and security guards. But they were not the main concern.

The 6am shift workers were starting to arrive, and activists set about leafleting the workers, demanding “Real jobs, not scab jobs.” Many workers stopped and took a leaflet. The threatening presence of security and management certainly had an impact on the confidence of the workers.

Jake, a student from Kingston university came to talk to the workers with the campaign. He said, “I was inspired by the London post workers support meeting on Monday night. I’d been a bit out of the loop but this is a really important struggle we need to fight for. Students have to do collections and visit picket lines and offer all the support they can.”

After the shift had gone in, campaigners dug around to see what they could find out about the centre. In an overflowing bin, bags of tags, dockets, which are attached to mail bags when they are sorted, were found.

These tags show that mail is being sent to the Dartford centre from all over Britain, and the world. Mail from as far a field as Montreal in Canada, Frankfurt in Germany, Warsaw in Poland and Bratislava in the Czech Republic. This is not Christmas mail, but routine post being directed away from the mail centres that usually sort it and into the scab centre.

The most revealing find amongst the rubbish was a closed, undelivered, un-franked letter with a stamp from Ireland on it addressed to AA insurance.

This is what happens when a causalised, poorly paid workforce who have not been properly trained are used for a vital task that is supposed to be delivered by a public service.

Some of the workers could have been no older that 19, along with many black workers and those that had been forced off the dole to take a job through an agency.

We must encourage workers to come together and not be used as scabs against other workers, and we must continue to spread solidarity with the post workers, through collections, visiting picket lines and drawing attention to the scabbing operation that Royal Mail is running to undermine the strike. 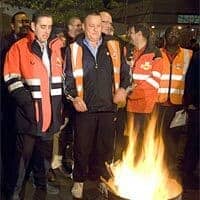 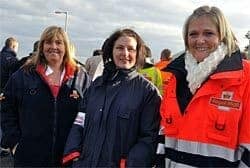 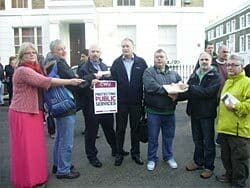 Going all out is the way to win

Is Royal Mail breaking the law to try and beat the strike? 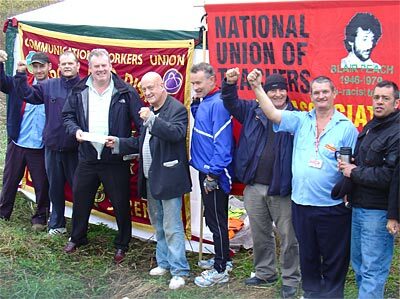 Who was behind Ipswich anti-post strike protest?

Can Royal Mail protect scabs from their managers?