Eyewitnesses to the 1961 Paris massacre

This article is over 10 years, 8 months old
Hadj Abdel Aziz A senior steward hurried to give me a green armband as I arrived. I effectively became a traffic warden, except that I was directing Algerians—women and men, old people and children.
Downloading PDF. Please wait...
Tuesday 11 October 2011

A senior steward hurried to give me a green armband as I arrived. I effectively became a traffic warden, except that I was directing Algerians—women and men, old people and children.

The crowd became even denser. We marched towards the Grand Boulevards with banners saying “Long live the FLN! Algeria for Algerians! Free Ben Bella!”

The more we advanced, the more the truncheons fell. You had to avoid the edges of the demonstration as the police were hitting everyone and anyone. Harkis—Algerians loyal to France—threw themselves upon their victims in groups of four. They didn’t even spare women or their children.

They put men onto buses and police vans, hitting them with truncheons and rifle butts. There was blood everywhere. My brother was severely wounded in his knee.

The violence got worse at Place de la Nation. The police shot at people who fell down, leaving them wounded or dead. Everyone was gripped by panic and scattered. At this point I took off my armband. I had no wish to attract attention and see my life shortened.

I ran to the entrance of the Metro, where I received a flying kick to my backside. I was crushed headfirst against the bannister of the stairwell. I got home covered in blood and broken by my wounds.

I never saw some of the partisans again. A few days later the FLN organised a meeting. The leaders said we had sacrificed ourselves to demand our rights and our freedom. There had been many deaths. We were shaken by what had happened. But we knew that together we could win a free Algeria.

My cousin went to a demonstration at Place de l’Étoile with his daughter. They pretended they were going out for a walk. When I came back he told us that he’d seen people get beaten up and thrown in the Seine. He’d received blows himself too, in front of his daughter.

Many demonstrators had been killed by the police. The workers without families, the poor people—who was going to look for them? No one.

I had a cousin called Aïsani. They knocked her out with blows from their rifle butts. She was taken to hospital in Nanterre where she fell into a coma. She survived, but regularly suffered cranial traumas, illnesses and headaches.

When my father came back from the protest he confided only in my mother. All he would tell us was that the demo “did not go how we wanted—I think there have been many deaths”. He never showed how he felt.

My friend Boujémra told me he was taken to the internment centre of Vincennes. “They unleashed the harkis—Algerians loyal to France—on the crowd like a pack of dogs,” he told me. “They hit everyone with truncheons as they passed.”

There were many killings. The police also killed Moroccans, Tunisians, Portuguese and people from the Antilles. How could they tell people’s origins apart in that madness, based only on their dark skin? 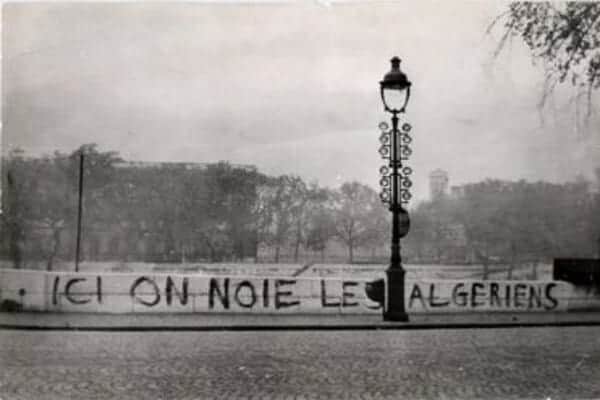