Firefighter speaks out: ‘It’s about our lives and your safety’

This article is over 11 years, 10 months old
London firefighters are balloting to strike over a bosses’ plan to sack them and force through new contracts with worse shifts. Yusuf Timms spoke to Tom Walker about his work—and why the service needs to be defended
Downloading PDF. Please wait...
Tuesday 28 September 2010

Bosses want to bring in 12-hour shifts. How would they change the way you work?

The important thing to grasp is that the shift system at the moment—a nine-hour day and a 15-hour night—effectively means that fire cover in London is the same 24 hours a day.

The truth is 12-hour shifts open the door to “flexibility”, and therefore to cuts. If they decided to close ten fire stations they could cut maybe 300 jobs.

But if they want to get rid of 1,500 or 2,000 jobs in the London fire brigade over the next five or ten years, they can’t do it just by shutting fire stations.

They’d have to shut so many that people would notice the damage to the capacity of the brigade and our ability to keep the public safe.

But if they can have staff working where they want them when they need them, then it’s easier for them to reduce the number of fire engines on duty at night time.

They can move people onto days, when we do what they think is more “productive” work.

To be able to do that it’s necessary for them to equalise the hours between the day and the night.

They’ve already drawn up the plans to cut night time fire cover, which has been revealed in a leaked document. They now claim it was just “blue sky thinking” but I think that you don’t write down your wildest dreams in the hopes that they won’t come true.

What’s the difference between a fire during the day and at night?

In the day it’s not so bad, because people are awake and usually the alarm is raised in good time. At night, fires can go undetected for longer.

People can find themselves trapped at the top of their house, or in a block of flats, where the fire is below them and they can’t get out—that’s if they’re woken up by a fire alarm at all.

They can quite easily die in their sleep.

There’s no doubt that a fire at night poses a much bigger risk.

That’s why cutting night time fire cover is such a scandal.

The bosses argue the real problem is that you sleep for part of the night shift. What do you think?

As soon as you start to work, the fact that you have had some sleep makes an enormous difference. You notice it at a protracted incident.

If you happen to get an incident at say 11pm or midnight, before most people have gone to bed, and it goes on till 3am, you’re incredibly tired.

If you’d had a few hours sleep, although it’s not nice for the first few minutes, your body responds better. And that means there’s less risk of mistakes.

It’s not a fight about sleep though. What’s really at the bottom of this is that by introducing flexible working, they can break up the watch system and push through attacks on our conditions.

What is the watch system, and why is it important?

A watch is a team of people who work together—a tight-knit unit.

The watches are the building blocks of the service. You tend not to deal with individuals in the fire brigade—you deal with watches.

They mean that there’s a spirit of collectivity, of collective decision-making, and of unity in action that is implicit if you work in a team of people.

This is something that it’s well known our Tory boss Brian Coleman despises about the fire brigade.

People eat together, they sleep in the same room, they work together. It fosters unity.

You learn people’s strengths and weaknesses, so in terms of firefighting it’s a very effective way to work.

And for the union, when firefighters are faced with any form of attack, you’re not facing it on your own.

You’re together with your watch in all things—and it’ll be the discussion of the day around the mess table, where we eat.

Obviously there are differences of opinion, but on the whole, watches tend to come to a view about things.

If you’re working like that, you’re in a much better position to argue for the continued necessity of things like cooking facilities, sleeping facilities, good facilities in general on the station.

What if they broke this up?

If we were working anywhere, anytime, with a bunch of people we don’t know, and you’re all on slightly different contracts, then all the things that hold firefighters together would be broken.

This is the key. The 12-hour shifts are an attack on the watch system and the union.

For bosses, it opens the door to a series of cuts and attacks, weakening the position of the workforce and the union. For us, we’ve got to keep the enemy on the other side of the gate.

The shift is the line around which we can fight. We need to maintain fire cover and safety for the interests of people.

We also need to protect our terms and conditions. It’s because those things are linked that this is a battle for everybody.

Firefighters are not champing at the bit to walk out. They feel a sense of responsibility—nobody takes the decision lightly.

The other factor is the defeat of the 2002-3 national strikes. It comes up at every single union meeting. People say: we got stuffed last time, what’s to stop us getting stuffed this time?

You have to take on an argument about why it was that we lost that dispute—was it because we took strike action, or because we didn’t take enough strike action and we called off the second eight-day strike?

There’s work to be done. We had an excellent lobby of our bosses, and we had a massive 95 percent vote for action short of a strike that we’re on now.

We have to go out and win the maximum number of people to vote yes to strike—and to the idea that if it’s necessary to take strike action then we should do it.

We must raise the need for a recall FBU conference.

This is key. The bosses plan to mobilise a force of scabs from around the country run by a private company.

If we have to take strike action, conference should be recalled and we have to be prepared to walk out nationally.

We can’t be left to fight alone, because this is a fight for the whole union—and the whole working class.

What happens when someone calls the fire brigade?

On average, from the alarm sounding to the fire engine pulling out of the station, you’re talking about between 45 seconds and a minute.

When the alarm goes off all the lights come on in the station. A message comes on the printer telling you what the incident is that you’re going to—and everybody heads for the fire engine.

We attend a wide range of incidents, from people trapped to car accidents, floodings and fires.

If it’s a fire, there’d be the two people putting on breathing apparatus, ready to go inside.

Somebody else would be the entry control officer. They keep track of who’s in the fire and how long they’ve been there.

The driver has to jump out, go to the back of the fire engine, get water pumping. Then the people wearing breathing apparatus will take a hose into the building.

What’s it like once you get inside the building?

Ninety nine times out of 100, you go in and you’re in a smoke-filled room where you can’t see a thing. Fires are fought in the dark, whatever time it is.

A lot of the training is about working out how to search a place in the dark, how to judge where you are and the route back, how to figure out which way doors open in the dark—that sort of thing. They are difficult conditions.

Also, fires are so varied. There are 1,001 factors that can affect it. No two fires are the same.

People often ask firefighters: what’s the biggest fire you’ve ever been to? But it’s not really about size.

We have a plan of most big public buildings.

We’ll know how many people work there, where the fire exits are, if there are any chemicals stored there.

The really dangerous things are people’s homes, small shops, garages, things like that—as well as blocks of flats, which can be incredibly serious. You don’t know what’s inside places like those.

Take the average family home. You could be clambering up or down the stairs in the dark and step on a rollerskate and disappear down a flight of stairs.

That’s going to be bad news.

That’s before you get to the turpentine under the sink and god knows what—aerosol cans, all sorts of things. You also don’t necessarily know how well the place is built either.

So you’re more nervous when you turn up to them—you’re going into the unknown.

What do you do when you’re at work but there’s not a fire?

We work two days in a row, then two nights in a row. Then we have what’s called four days off but isn’t really, as we’ve already worked until 9am on what’s deemed to be our first “day off’.

By your start time you have to be dressed in your uniform and your fire gear, ready for roll call.

Every day an inventory of the fire engine is carried out, to make sure everything that’s supposed to be on it is and it’s working.

You may also test a piece of equipment or something to do with the station itself.

You have a computerised diary, with slots either filled in by you or filled in centrally with something for you to do—a fire inspection visit, putting up a smoke alarm and so on. It’s heavily policed.

When there’s time for it, we do training drills. You practice using various pieces of equipment in made-up scenarios: chopping up an old car to practice getting someone out of a car accident, or using ladders, hoses and water for a high-rise incident—all sorts of things we do that need to be practiced.

Of course, you can get called away at any second by the alarm.

Yusuf Timms is FBU borough secretary for Kensington and Chelsea. He was interviewed in a personal capacity

Visteon - a jobs fight for all of us

‘Egypt’s left was crucial to mobilising the masses’ 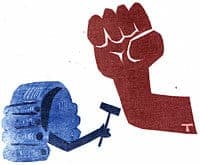