Following up our successes

This article is over 17 years, 7 months old
SOCIALIST WORKER sellers in Brent, north west London, took to the streets last week to follow up a successful campaign for Respect. Simon reports, \"On Thursday we did a stall at two sites of an FE college. People were keen on the Socialist Worker election coverage.
By MICHAEL BRADLEY Circulation Department [email protected]
Downloading PDF. Please wait...
Saturday 26 June 2004

SOCIALIST WORKER sellers in Brent, north west London, took to the streets last week to follow up a successful campaign for Respect. Simon reports, “On Thursday we did a stall at two sites of an FE college. People were keen on the Socialist Worker election coverage.

“We visited a number of Respect supporters in the Somali community to get a voter registration campaign up and running and to deliver a thank you letter from Respect. Members of a Somali women’s group and a man who had organised lifts to the polling station bought the paper. We then set up a campaign stall on Wembley High Street. Over the day we sold 81 papers. On the Friday night some 35 Respect supporters met up informally. We sold five Socialist Workers and four people booked up for Marxism 2004, including the local candidate. On the Sunday we sold 43 papers at Wembley market.”

‘People rushed to buy this week’

ANDY REPORTS that in Wakefield 16 people came to a Unite Against Fascism post-election meeting-and 14 of them bought Socialist Worker. People came up and bought the paper at the beginning of the meeting because they wanted to read the news and analysis about the elections. Many UAF activists have also been involved in other campaigns such as Stop the War or support for the firefighters. The paper has built up a good reputation with them. In the meeting itself the discussion was shaped by the analysis in Socialist Worker.”

Posting a clear message from CWU

A DELEGATE at the CWU postal and telecom workers’ union conference reports, “Last year we were delighted when we sold 205 copies of the second issue of the paper during the CWU conference. We weren’t sure we could match it this year because Royal Mail had refused release for some activists and there were fewer delegates present. But we sold 214! The paper is read regularly among a significant layer of activists in the post. They see it regularly and that is one reason why we have good sales at the conference. Another reason is the strongly political atmosphere caused by the war, Blair’s crisis and the debates in the union over the Labour Party.” Sixty six papers were sold at the FBU firefighters’ conference.

Cleaner waits for deportation: ‘My crime? I took a job to survive’ 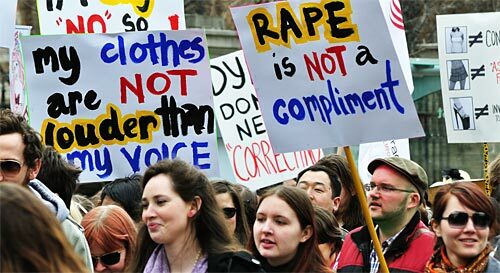 The 'SlutWalk' phenomenon: Women refuse to take the blame for rape