This article is over 6 years, 11 months old
National Gallery bosses want union rep Candy Udwin out of the picture... That’s why every trade unionist should join the fight for her job
Downloading PDF. Please wait...
Tuesday 26 May 2015 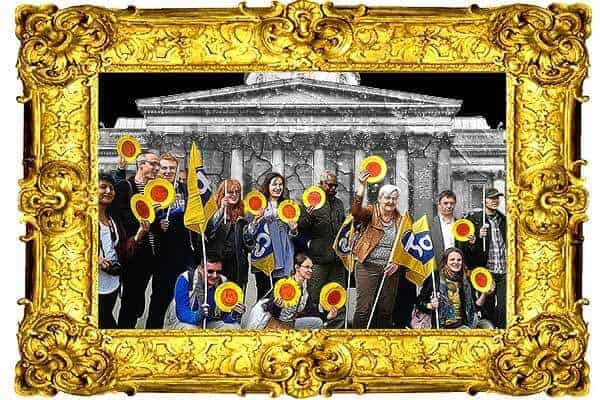 At London’s National Gallery a struggle has reached a critical stage—and the outcome matters for every trade unionist in Britain. Workers at the gallery have been striking against privatisation plans since January. They are also fighting the victimisation of leading PCS union rep Candy Udwin.

Gallery bosses sacked Candy earlier this month on trumped up charges of “breaching confidentiality”. Candy had emailed a PCS official with a draft of questions to ask management. She is appealing her sacking.

Speaking at the PCS conference in Brighton last week Candy said, “I’m the first trade unionist to be sacked under this Tory government.

“We know what they’ve got in store for us with austerity policies and union-busting plans. I won’t be the last unless we stop them.”

PCS general secretary Mark Serwotka told Socialist Worker, “It’s a critical dispute—not just for the gallery and the PCS but for the whole trade union movement.

“It’s a chance to show the gallery management and the Tory government that we’re not just going to take it lying down.”

Bosses suspended Candy on the eve of gallery workers’ first five-day walkout in January. It was an attempt to undermine the strike and smash the union.

But bosses were right to be frightened. Candy is a class warrior with an impressive track record of fighting back and organising workers.

In the 1970s Candy was secretary of a successful campaign to save Elizabeth Garrett Anderson women’s hospital in Camden, central London.

As clinic receptionist and union activist at London’s UCLH hospitals in the 1980s and 1990s she organised strikes and campaigns against ward closures, cuts and privatisation.

Candy faced victimisation then, too. In 2000 she was victimised along with staff nurse Dave Carr after fighting privatisation and underfunding. Candy had defended Dave before.

Dave told Socialist Worker, “When I was sacked in 1995, the campaign she led in the hospital is why I got my job back. I owe my career as a nurse to her.

“I’ve never worked with someone as indefatigable and conscientious as Candy. Candy’s a class fighter and the reason I’m a revolutionary socialist.”

Candy and the gallery strikers have received widespread support (see below). Strikers have travelled the length and breadth of Britain, speaking at meetings and raising money for their hardship fund.

On the day of Candy’s sacking, some 50 people protested inside the gallery’s Sainsbury wing in her support. And more than 10,000 people have signed a petition calling for Candy’s reinstatement.

One striker told Socialist Worker, “I’ve been speaking at meetings in different parts of the country.

“It’s amazing—everywhere we go people are just giving us money.”

The fight at the National Gallery is a fight for everyone who wants to take on Tory attacks on public services and trade unions.

That’s why it is winning such support. The PCS has called a national demonstration against the privatisation and Candy’s victimisation in London this Saturday. Support from other campaigners gives strikers more confidence to fight.

Candy told PCS conference last week, “It’s really helped the dispute, all the connections we’ve had with people outside PCS and the gallery. They’ve wanted to support us because they want to fight back. It’s really encouraged us”.

Serwotka added, “If this is a dispute that we win, we’ll have more confidence to win all the other disputes.

“Let’s make sure that we start off this Tory government’s term with a victory for the trade union movement and a defeat for the politics of reaction.”

Candy agreed. She said, “If we can win it’s not just going to be important to me, to us, to the people at the National Gallery.

“If we can win, that will be a building block in the fightback that we need against the government. A victory for the National Gallery can then be the start of the fightback to kick out the Tories”.

Strikers have already forced gallery bosses to pay them the London Living Wage. But it will take more strikes to stop the planned privatisation of 400 out of 600 jobs and win Candy’s job back.

Mark Serwotka told Socialist Worker, “The most effective way to fight would be industrial action. We’re going to make Candy’s reinstatement central to our dispute resolution.”

The new director of the National Gallery has been appointed but hasn’t yet taken up the post. Serwotka told PCS conference, “We can send a message to the new director that there’s no hiding from this dispute.

“It’s not going to go away. The best thing he can do is to step in and resolve it.”

Many strikers agreed. One told Socialist Worker, “If we can get Candy back that will be a massive victory for the trade union movement.

Another said, “People are up for it if there’s more strikes. We’ve got to put the pressure up.”

Gallery strikers will need continued support to keep up their fight.

Serwotka said, “While the union is supporting the strikers with 50 percent strike pay there would be a massive detriment to those people if we weren’t able to raise through hardship collections practical support.”

“The reason why we’ve been able to do that is because of the support we’ve had. That’s come from the PCS, the trade union movement, but also from social movements, from artists, from pensioners.”

As one striker told Socialist Worker, “It’s important that people donate to the strike fund. We need to get the rest of the money from donations.”

What you can do to back the campaign 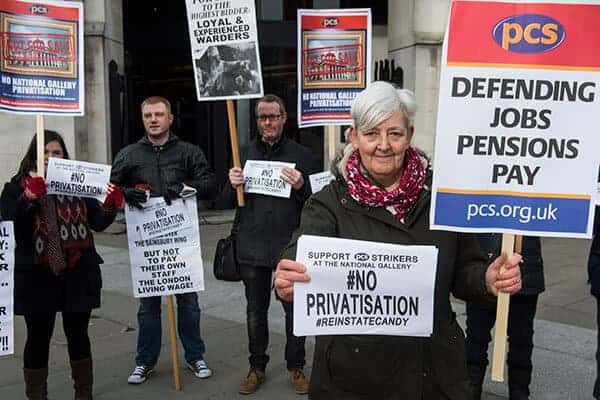