France 1995: striking lessons in how to keep your pension

Jacques Chirac was elected president of France in 1995 and promised to mend France’s “social fracture”. Alain Juppé, his new prime minister, said it was time to deal with the county’s debt problem.

They said cuts were needed to reduce the budget deficit. People would have to work longer.

They announced a public sector wage freeze along with plans to raise the retirement age by two and a half years. The government attacked benefits, health insurance, public services and the railways.

By the mid-1990s the number of strike days in France had fallen below half a million a year. That compared to a figure of three million in the 1970s.

Trade union membership had dropped to under 10 percent of the workforce.

Most of the political establishment saluted Juppé’s reforms as “courageous” and “reasonable”. Some leading figures in the Parti Socialiste (PS), France’s equivalent of the Labour Party, backed the plans.

Few expected what was to follow—the most emphatic reassertion of workers’ power in a generation. There were three weeks of strikes by two million public sector workers. These were punctuated by huge, angry, resolute demonstrations.

The street echoed with a slogan that summed up the new sense of confidence and class unity felt by those striking and marching—“All together! All together!”

Trade union leaders called a day of strikes and demonstrations for 24 November. More than 500,000 people marched throughout France. They expressed their anger not just at the pension reforms but at unemployment, poverty and attacks on the public sector in general.

By 28 November workers on the railways, post office, energy and telecom sectors were taking action.

Union leaders focused on a national demonstration three weeks later. But workers were organising mass meetings on the ground. In many workplaces these were open to non-unionised workers and students.

One journalist reported on railway workers addressing a mass meeting held at a postal depot in Paris.

“We can win but we need numbers,” one said. “We are going to paralyse the economy. We have to get round other workplaces and explain to people.”

As they went from depot to depot, the movement spread like “a gunpowder trail”.

The strikes did indeed paralyse France. As one commentator noted, they were “an expression of popular feelings—anguish and anger—that are normally repressed and ignored by political parties and the media.”

One union official remarked that he had been “overtaken by people who were neither politicised, members of an organisation, or unionised”.

The unity and politicisation of the mass meetings was reflected in the demonstrations—up to two million strong nationally by mid-December. Calls for Juppé to resign were widely taken up, although not by the union leaders or the PS.

Juppé was forced to make concessions on pension reform and the restructuring of the railways. But he managed to maintain his social security cuts by proposing a “welfare summit”.

It was a breathtaking confirmation of the awesome power of the labour movement.

The leap from resignation to explosion and the sense of possibility it opened up was summed up by one nurse.

The strikes showed that unions could mobilise millions. They exposed the limitations of trade union leaders—eager to preserve their role as intermediaries between workers and the government.

They also offered a glimpse of the ability of rank and file activists to build networks capable of breaking down barriers between different sections of workers.

These were not strong enough, on that occasion, to bring down the government.

But the movement underlined the potential for networks of activists to seize the possibilities opened up by mass strikes—possibilities that remain alive today. 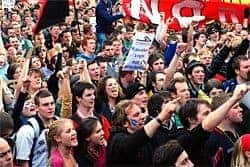 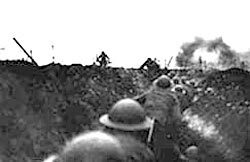 Slaughter at the Somme