From our Archive: Reporting Black September from Amman, Jordan

‘Jordan has seen one of the great national uprisings of modern times. The overwhelming majority of the population, led by the guerrilla organisations and the units of the popular militia, have fought to overthrow Hussein’s reactionary government.

The Royal Army has started to crush the popular movement.

For the last week the full firing power of the artillery and tanks has been directed at the densely-packed, poorer sections of Amman where the guerrillas have the bulk of their support.

The shells have been tearing apart the corrugated iron huts, tents and crude concrete dwellings where the refugees somehow eke out an existence.

Whole blocks of flats have been blown apart in order to “flush out” a single sniper.

Estimates of those killed already approach 15,000 and the king’s army has no scruples about firing upon the Palestinian hospitals where some of the wounded could be tended.

Even in Amman, where Hussein’s forces have been concentrated, the resistance seems far from crushed.

The Palestinians go on fighting because they feel they have little choice. For 20 years they have been herded into refugee camps, kept alive by a pitiful hand-out from the United Nations and told to be quiet.

Now they see the chance to exercise control over their own future. They are not going to let that chance slip and rifle and sub‑machine gun fire still blaze back in deadly defiance from the slums.

Western commentators fear that Hussein will fall—afraid that British and American big business interests will be weakened—particularly the oil monopolies who control most of the wealth of the Arab lands.

Meanwhile Nasser, for long the self-proclaimed “leader of the Arab revolution”, stands on the sidelines hoping that the king will win.

On one side of the conflict in Jordan stand all the old powers: oil monopolists and feudal sheikhs, Zionist politicians who practise anti-Arab racism and Arab monarchs who thrive on anti-Jewish threats, those who are waging a bitter war against the Vietnamese people and those who put down the workers of Budapest and Prague.

On the other side the Palestinians stand alone. Their only support are the masses in the other Arab countries as they fight for a land free from imperialist domination, where Muslim, Jew and Christian can live and work together.

A minority of the Palestinians see further than this. They recognise that such a democratic state is only possible in the context of a united socialist Middle East.’ 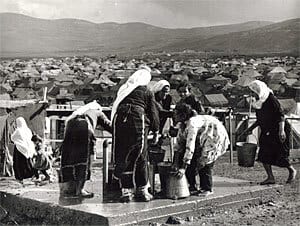