The Group of Eight (G8) industrialised nations will rarely have looked less capable of solving the world’s problems than at their summit in St Petersburg, Russia, this weekend.

Major divisions between the G8 leaders have surfaced. The US, Britain and France have unpopular leaders whose authority is crumbling, and who will soon be out of office.

In Germany, Italy and Canada governments rely on such small majorities that they threaten to fall apart.

A year on from the last summit in Gleneagles, Scotland, the G8’s grand promises to end world poverty have turned to dust (see column).

At the top of the agenda at this year’s G8 summit will be “energy security” and the spiralling price of oil. But here the G8 leaders are deeply divided – and Russia is at the centre of disagreements.

Relations between Russia and the US are at their lowest point since the collapse of the Soviet Union in 1991. There was even talk at one stage of the US boycotting the summit.

US vice-president Dick Cheney recently accused Russia of using energy as a tool of “intimidation and blackmail” against its neighbours, while Russian president Vladimir Putin retorted that the US was like a “wolf” ready to eat up its enemies.

Russia’s relations with the European Union (EU) are almost as bad. In January, Russia was embroiled in a bitter row with Ukraine over gas supplies. It then cut off gas to Ukraine, causing knock-on disruption to gas supplies to western European countries – the EU relies on Russia for a quarter of its gas.

The EU has demanded that Russia make its gas more accessible by allowing western companies to use its export pipelines.

But in retaliation the Russian government refused to sign the EU’s energy charter guaranteeing future supplies. Russia threatened to divert gas supplies to China, to fuel its rapid economic growth if European countries block the expansion of Russian companies into their own domestic markets.

The trebling of the oil price in the last four years means that Russia, the world’s second largest oil exporter after Saudi Arabia, has clawed its way back from the economic crises that swept the country in 1992 and 1998. The government has built up a huge “stabilisation fund” of $66 billion by creaming off oil profits.

But instead of spending the money on welfare, it wants to use its new found wealth to increase its international influence and break into world markets.

Since Putin came to power in 1999, he has acted to rein in the “oligarchs” – the super-wealthy businessmen who looted the economy during the scrabble to grab former state industries in the mid-1990s. He has sought to bring their activities under state control.

For example, he forced two leading oligarchs, Berezovsky and Gusinsky, to flee the country and has jailed a third, Khodorkovsky, while renationalising his Yukos business empire.

Putin has also placed government ministers and senior aides on the boards of Russia’s main companies, merging some of them into giant monopolies.

This is not a return to the central planning of the Soviet era. The Kremlin has fully embraced the market, as demonstrated by its eagerness to raise finance on the London stock exchange this summer by selling £10 billion of shares in its third largest oil company, Rosneft.

The percentage of industry in Russia that is state owned has barely risen, going from 30 percent to 35 in recent years. Billionaire oligarchs who have backed Putin, such as Chelsea Football Club owner Roman Abramovich, continue to do very well.

However, Putin has created what the Financial Times calls “a much more directed capitalism”.

Along with these economic measures, Putin has cracked down on dissent, muzzling the media and packing parliament with loyal supporters. This has involved setting up artificial, Kremlin controlled political parties so that protest votes are channelled in safe directions.

In the wake of the recent “colour revolutions” in Georgia, Ukraine and Kyrgyzstan the Kremlin has poured money into creating a mass youth movement, “Nashi” (Our Own), to pre-empt youth protests and head off opposition movements.

Mirroring Bush and Blair’s “war on terror”, the Russian army maintains its stranglehold on Chechnya. Widespread Islamophobia has led to a wave of racist murders in Russia of people from the Caucasus and Central Asia.

Yet despite these bullying tactics, Putin is nervous. His moves to privatise housing and cut welfare benefits provoked powerful street demonstrations last year.

Although economic growth has taken the edge off the extreme poverty of the 1990s, millions still struggle to get enough to eat.

The shift from state capitalism to free market capitalism devastated Russia. The economic crisis in 1990s was the fastest industrial collapse in the world outside war time.

It had a traumatic impact on the majority of the population of Russia. Economic output halved, thousands lost their jobs. Male life expectancy fell by ten years over the course of the decade.

Most Russians have seen no benefit from the recent explosion of oil wealth. According to World Health figures, male life expectancy still stands at just 59 years. In the spring, soaring sugar prices sparked bouts of panic buying.

But a few have enriched themselves enormously – Russia is now second in the league table for the number of billionaires, after the US.

Russia’s ageing factories are running close to capacity, while the upheaval caused by attacking the oligarchs means there is too little new investment for Russia to compete effectively on the world market.

These economic and political factors will help to shape discussions at the G8. Behind all their talk of liberalising the economy and opening up to free competition, the G8 nations will engage in fierce battles to protect their markets and fend off predatory foreign companies – including Russian ones.

When Russia’s gas monopoly Gazprom, now the world’s third largest company, said it was interested in buying the British gas distributor Centrica in February there was panic in the British government, which secretly discussed blocking any such move.

Last month when the Russian steel giant Severstal lost out in a takeover battle for the Franco-Spanish-Luxembourg company Arcelor, the Russian government lashed out, accusing the Europeans of “Russophobia”.

At the same time, major western European governments have made plain their intentions to create “national champions” in strategic sectors such as energy, metals and defence, rather than allow foreign companies to swallow them up.

The US has also seen a storm of protest against China trying to buy a US oil company, and at an Arab firm that wanted to purchase port facilities in the country.

The failure of neo-liberalism to boost growth rates and re-invigorate capitalism means G8 governments are resorting to non-economic means of pursuing their economic interests.

This might mean turning off gas supplies, whipping up protectionist nationalism or military assaults on weaker countries such as Iraq and Chechnya.

While trying to look like a world leadership united in pursuing “democratic”, free market capitalism, the St Petersburg summit will be an exercise in preventing the simmering disputes between G8 leaders from boiling over.

Signs of hope on the streets…

St Petersburg. A demonstration was set to take place this Sunday.

The counter summit was expected to attract about 1,000 people, according to Yevgeny Kozlov, the main organiser of the Russian Social Forum in the city.

By Russian standards this would not be a bad figure. But the event reflects all of the weaknesses, and few of the strengths, of previous social forums in Europe.

The counter summit was to be held in a crumbling football stadium on the edge of town, at which the event’s modest size and marginality will only be emphasised. The police will not let the closing demonstration anywhere near the city centre.

So participants risk feeling isolated, rather than empowered.

The event bans political parties from taking part. Yet several of its main organisers, such as Kozlov, are themselves members of political parties and are relying on their organisations to make up the numbers.

These organisations are large and vocal, and their arguments will inevitably set the tone of debate. On the demonstration their size and discipline mean they will probably drown out everyone else.

There are some more hopeful signs, however. The forum’s organising committee includes a small trade union federation, which will be sending delegates.

Moreover, in early 2005 mass protests of pensioners broke out against cuts in benefits. These protests in turn inspired a countrywide movement against the privatisation of state run housing.

The forum’s organisers have gone to great lengths to make connections with the groups at the centre of the housing movement, and hopefully it will be well represented at the event.

Kozlov told Socialist Worker, “The main thing for us is forming a social base for the left in Russia, which doesn’t yet exist – a base of fighting activists within the protest movement. We have to work inside that movement.”

…but right wing also a danger

“Russia is everything, the rest are nothing!” the demonstrators shout, the slogan splashed across their party banner. “Higher, higher, red flag – Stalin, Beria, Gulag!” they add, or even: “Our fatherland is the Third Reich!”

Welcome to anti-capitalism, Russian style. Since 2001 the young Nazis of the National Bolshevik Party (NBP) have dominated the annual “Anticapitalizm” protests in towns and cities across Russia.

At the G8 summit they are likely to be the centre of media attention.

The NBP is one of the most active and effective of the Nazi groups that have mushroomed in Russia over the past 15 years. Their symbol is Hitler’s flag – red with a white circle. But instead of the black swastika in the middle is a black hammer and sickle.

The Russian left is in disarray. Many of their number march together with the Nazis, and are prepared to join with them in opposition to the regime of president Vladimir Putin.

The Communist Party of the Russian Federation (CP) is the largest organisation, with hundreds of thousands of members. Its leader, Zyuganov, sees the 1917 Russian revolution as a disaster that split the Russian nation – for Zyuganov, Stalin rescued the Russian empire.

Last month a leading member of the French Communist Party spoke out against the Russian CP after witnessing young Russian Communists, backed by their leaders, joining with skinheads and police to beat up gays and lesbians at Moscow’s first Gay Pride event.

Nostalgia for the Soviet Union unites the left with Russian nationalists who see in the USSR the pinnacle of Russian imperialist expansion. The left is thereby blinded to its own nationalism, blaming non-Russian republics for breaking up the USSR rather than seeking the roots of disunity in Soviet imperialism.

This helps explain why the left has taken no serious action against the war in Chechnya. In fact, many “Communists” believe that Stalin was right to deport all the Chechens to Siberia in 1944.

It also explains why the left has failed to take any anti-fascist initiatives. The biggest protests against the recent spate of racist murders in Petersburg have been organised by Putin’s youth organisation “Nashi”, with no effort by the left to intervene. 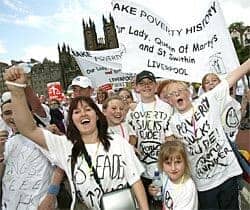 Gleneagles: every promise on debt was broken