Gaza: a journey to defiance

Nothing shows the brutal power of Israeli weaponry better than the piles of rubble that greeted us as we crossed into Gaza.

Some had been homes just a few weeks previously, others had been offices or schools. Now they lay pulverised.

We had set out to make a film about our attempts to cross into occupied Palestine. We called it The Road to Gaza because we had no assurances that we would get into the territory – Gaza has been under a tight siege for over two years now, and under Israeli control for over 40 years.

Our first stop was the Egyptian coastal town of Arish, some 50 kilometres from the Rafah crossing into Gaza. Arish is in the Sinai peninsular, a very poor region of Egypt – something that was noted by Palestinians when they broke out of Gaza in September 2005.

The town was festooned with Palestinian flags. The Egyptian state struggles to keep control over a region where people feel they are closer to Palestine than to Cairo.

During the recent Israeli onslaught on Gaza, Arish exploded with mass demonstrations day after day.

We met a journalist for Al-Ahram Daily, one of Egypt’s most popular newspapers. He told us that the communities of the Sinai and Gaza see themselves as one, and are scornful of a border drawn up by Western imperialism after the First World War.

The conversation quickly turned to the solidarity movement in Britain. The wave of university occupations has particularly captured the imagination of people in Egypt.

The next morning we travelled to the border town of Rafah and met some 40 peace activists from Italy, France and the US. They had been waiting for five days to cross into Gaza, spending restless nights under the stars listening to heavy explosions as Israeli jets blasted the entrances to the smuggling tunnels that pepper the border.

We sat in on a meeting of international activists called to discuss how to put more pressure on the Arab regimes – including Egypt – to support the Palestinians.

The Rafah crossing is the most overt example of Arab collaboration with Israel. The Egyptian government has attempted to block the flow of people, food and medicines into Gaza.

The meeting was interrupted by an Egyptian soldier who told the activists that they would finally be allowed to cross. We followed them through into Gaza the next morning.

The crossing point is a surreal mix of airport terminal and interrogation centre, although the questions were delivered over cups of tea. We explained the purpose of our film to the Palestinian authorities and were let through.

We took a taxi and journeyed along the main road north through Gaza. The astonishing scale of the destruction soon became apparent.

The buildings were riddled with holes. At the roadside lay rubble and several dead horses. But the streets were being cleaned as Palestinians busied themselves with repairs.

Perhaps this was part of the steadfastness and resilience that has so frustrated the Israelis despite the decades of violence and repression they have meted out.

We stopped at a huge building in a wasteland. It had once been the police training academy, but had been bombed repeatedly while the trainees gathered for a graduation ceremony, killing dozens. The massacre was the first act of Israel’s latest war on Gaza, which began late in December.

The behaviour of the children was striking. Five year old boys on the street stood bolt upright, arms defiantly at their sides. Occasionally one would thrust pieces of shrapnel and melted magazine cartridges at us.

Our trip was cut short when our guide, who was from the ruling Hamas organisation, warned us that he had received word that the Israelis were about to launch an air raid.

Gaza is full of such rumours, but the scale and intensity of Israel’s destructive power meant that all warnings have to be taken seriously. So we climbed into a cab and drove quickly away.

We passed a destroyed cement factory, then a string of farm buildings in ruins. Tank tracks embedded in tarmac or churned up deep red soil bore witness to the Israeli incursion.

Ahead and behind was a trail of devastation. On one farm the trees and a villa had been flattened to give Israeli gunners a clear view of the area.

That night we stayed in the Palestine Hotel by the sea. The warm and calm Mediterranean evening was punctuated with flurries of distant gunfire, usually directed at small fishing boats used by Palestinians.

The following morning we were confronted by an immense human tragedy. We met two guides – an uncle and his nephew – who were to travel with us for our remaining time in Gaza. One was a supporter of Fatah, the party of Palestinian Authority president Mahmoud Abbas, the other was from their Hamas rivals.

We drove to a dirty clearing in the middle of a wasteland. The landscape that now looked post-apocalyptic was once farmland and housing.

This is the Zeitoun area, south of Gaza City. It was here that one of the most notorious incidents of the war took place. We visited the surviving members of the Samouni family who were sheltering under a makeshift tent. The children took turns to sleep, wrapped up in a few blankets.

Israeli tanks had attacked the area on 5 January. ‘They told the people to come into this house,’ said Mohammed Samouni, a school teacher. ‘Around 100 people gathered here, while three people left the house to collect food.’

These were immediately shot at. Moments later a barrage of shells hit the house, demolishing it and bringing it crashing down on the remaining inhabitants. ‘About 20 people were killed here, 15 of them children,’ said Mohammed.

Seven year old Ali told us how his father had left his house after soldiers instructed the head of the family to come out. He stepped out holding his passport as identification and was shot dead. Ali pointed to multiple places on his own body, indicating where the bullets sliced through his father.

Some 48 members of the Samouni family were killed that day, alongside scores of others in the town. The Red Crescent humanitarian organisation tried to come to the aid of the family, but after taking in some of the wounded, Israeli soldiers started shooting at them.

Children were trapped for four days with the corpses of their family. When medics were finally allowed back into the area they found the children hungry, thirsty and deeply distressed.

The Red Crescent finally evacuated over 100 people and treated them for hunger and dehydration. Water had been cut off during the fighting. One of the women asked, ‘We have been promised aid from governments around the world – but where is it?’

It is a good question. US secretary of state Hillary Clinton pledged nearly $900 million for Gaza. But little has trickled through the Israel-controlled border crossing.

The excuse is that the aid might ‘fall into the wrong hands’ – meaning Hamas and other resistance organisations.

We were then taken to meet a woman whose family had been burned to death. Their house was near the border with Israel.

Their roof was hit by a bomb – and then by white phosphorus. Her daughter died in her arms. Another badly-burned child cried out that he wanted to pray, before he too died. The woman lost her husband and three children that day.

The horrors did not stop there. The Israeli army came to her home, threw a grenade through the front door and set up camp in the house.

The stench of the dead soon became too much for them, so Israeli troops dumped the bodies onto the road and covered them with sand. The soldiers scrawled obscenities all over the walls. In the mother’s bedroom they drew a Star of David next to the words, ‘We aren’t sorry. Nice panties.’

As we stood on the balcony of the house, we saw surrounding flats and houses riddled with bullet holes. Many of the rooms had been blown out by rockets.

As the sun began to set we looked out over neighbouring Israel with its green landscape and modern buildings. In the air hung an Israeli observation balloon.

We drove back as night fell, passing the site of a bombed out American International School. We stopped to film, but our guides told us that the Israelis would fire at us if we stayed there too long with the headlights on.

That evening we drank tea and ate dates with some friends of our guides. This was in yet another place that had been overrun and vandalised by the Israelis. They had smashed a framed picture of verses from the Quran that hung on the wall.

Back in Rafah the next day we sat at the border and waited for the Egyptians to let us through. We heard the screech of Israeli warplanes flying overhead, perhaps trying to scare those attempting to cross into Palestine.

One Gazan told us how the jets were often heard but rarely seen, a fact that made them more terrifying.

We had forged a close friendship with our guide. He is 21 years old and just like many people we know – except he found himself compelled to defend his country from attack.

His pistol was no match for Israel’s advanced weaponry. I left with no doubt in my mind as to the importance of the resistance movement.

Accusations of human rights abuses are now piling up against Israel over its use of white phosphorus, its targeting of medical personnel and hospitals, and its use of human shields.

Gabi Ashkenazi, the Israeli army’s chief of staff, says his troops are ‘the most humane in the world’. We were struck by the obscene nature of this claim as we left Gaza.

The Road to Gaza will be released by the end of next month. The film’s website includes selected clips and details of film showings – go to » www.theroadtogaza.org 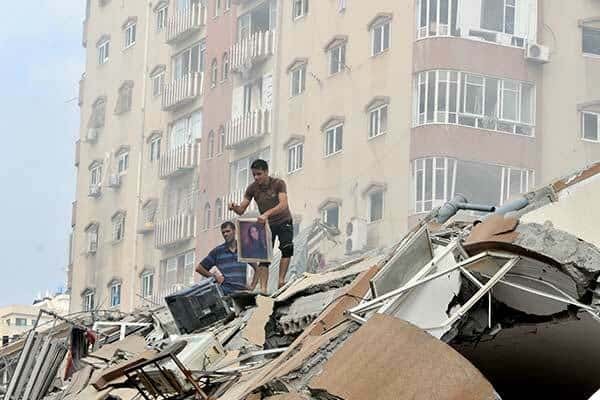