George Galloway: ‘Let’s unite to drive out the disaster of Blairism’

He will, of course, be remembered above all for one thing – Iraq. And rightly so.

In hitching this country to George Bush’s messianic “war on terror” Tony Blair committed a bigger foreign policy blunder than the Suez debacle in 1956. He is leaving office three years earlier than planned thanks to the resistance to the war both here and in Iraq.

The anti-war movement may not have been able to stop the war, but it has curtailed the bellicose ambitions of the US and Britain, and it has forced Blair out.

And in the dying hours of his premiership Blair tells us he is speaking with “total frankness” – which sort of breaks the habit of a lifetime. What he has to say is chilling.

Violence among some young people in our inner cities is not to do with society, he says. It’s beyond society, outside society, inexplicable through recourse to social factors.

You see, it’s about young black men acting on passions that have no rational explanation and which are alien to society.

I’m not sure about frankness, but this is a total obscenity from someone who occupies the office of a Labour prime minister.

It is, however, where this sorry will ’o the wisp of Blairism was bound to end up.

We didn’t know just how bad it would be, but some of us on the left knew where he was going back in 1994 when he assumed the Labour leadership following the tragic death of John Smith.

I remember leading the “no” side in the debate over scrapping Clause Four at the Scottish Labour Party conference that followed.

Almost mystical powers have been attached to that clause of the Labour Party’s constitution that committed it to public ownership.

It didn’t, for sure, prevent previous Labour disappointments, inadequacies and betrayals.

But scrapping that commitment was about establishing a line of march away from Labour’s social democratic past towards the full embrace of neoliberalism.

You may remember the fanfare at the time. We were going beyond left and right. It was the dawn of a new age. We were all stakeholders in a land of entrepreneurship and the rigors of the market.

For the many, not the few, we had to abandon 100 year old socialist concepts and embrace modern, forward looking 200 year old pro-capitalist ideology.

By now – nearly a decade and a half later – the world of politics was supposed to have changed beyond all recognition.

Well, there’ve been many changes, but they are at odds with the platitudes of Blair and Brownism.

Instead of restoring popular faith in politics, Blair has presided over increasing cynicism and alienation among the electorate. He has halved the Labour Party’s membership.

The wealth of the richest 1,000 people in Britain (including 65 billionaires) has increased by 20 percent in the last year.

Meanwhile, the number of children living in poverty is rising. Gordon Brown’s last budget obliterated any claims his claque might make that he is a great wealth redistributor.

That reputation had rested on him shifting a small amount of wealth from better off working people and worse off middle class people to the very poorest people with children by means of tax credits and benefits.

This year, he reversed that process by scrapping the 10p tax rate which helped the poorest people the most.

In foreign policy, Blair has led us into more wars in a shorter period than any British leader in history – royal or common.

He’s rehabilitated the discredited doctrine of liberal imperialism. In its wake has come a resurgence of repellent, illiberal doctrines at home.

New prejudices and old ones have been given a new lease of life. The racist demonisation of Muslims now operates in every register from the gutter to the after dinner banter at posh parties.

Blair has managed to make the rancid Tories – so despised ten years ago – not only seem electable, but become the frontrunners.

This is what has become of Labour under Tony Blair. Internally the left of the party has never been weaker, with veteran socialists standing down at the next election and no younger generation of left wing MPs set to replace them.

In the wake of the elections last Thursday and Blair’s departure it is time for the left not merely to consider where we are, but to act.

We are at a watershed. Politics is intensifying and speeding up – as it did in the run-up to the war in 2003, as it did when we came together to launch Respect a year later and, the year after that, to make a historic breakthrough in the general election.

Just as Blair’s ascension to power was accompanied by an assault on socialist and progressive positions in the unions, in university departments, in the media and in every area of public life, so his departure must signal a co-ordinated and systematic left fightback.

The declaration by major unions that they will not accept Brown’s 2 percent pay curb is a welcome first step.

It can provide some muscle behind the call to drive

Blairism out of our movement.

Everyone knows that will mean a confrontation with Brown. I suspect those who want to give Brown a chance – if only out of relief that Blair has gone – know that too.

There may be some clashes in the Labour Party, in which case those of us who are building a left electoral alternative will, as we have always done, give our support to the left.

But with Brown set for a coronation, and the left of the party in a parlous state, that battlefield will be far from the main front.

It is the Blairite ultras who are organising the stronger, right wing opposition in the Labour Party.

My appeal to all those who want to see the back of Blairism is to come together to take the initiative over the coming months.

We should discuss exactly how to do that, confident that the right – from New Labour through the Tories to the filth to their right – can be beaten if the left offers hope and a fighting movement for change.

I hope that many more are convinced to join us directly in building on the successes of Respect so far.

But we want to work constructively – in the anti-war movement, in the unions, in a fight for progressive ideas – with those who are not yet convinced.

It is with mixed feelings that I look at what Blair and Brown have done to Labour.

As one of the leaders of Respect I know that Labour’s election losses last week are a necessary condition for our coalition to advance.

But as someone who gave almost the whole of my life to building Labour and defending its ideals it is deeply wounding to hear that name spat out with such contempt by so many people.

It is time for the left to rally to ensure that the disaster of Blairism is not followed by something even worse.

That means not trimming our sails. 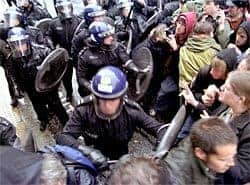 Law and order agenda has punished the poor

Privatisation and cuts wreck the NHS

This disastrous decade for the health service

Blair's legacy is Iraq: Nothing else even comes close

Tony Blair: down and out 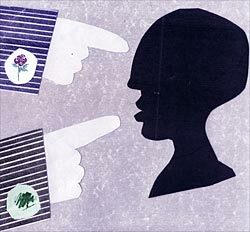 Following racism down the wrong path 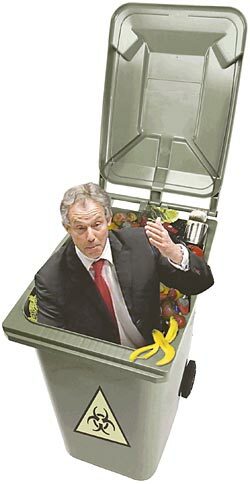 Into the dustbin with Blair