Gerry Conlon: ‘I confessed after being kidnapped and brutalised’

This article is over 11 years, 4 months old
The Guildford Four were framed and imprisoned for the Guildford pub bombings of 5 October 1974, which killed four soldiers and one civilian. The four—Gerry Conlon, Paul Hill, Patrick Armstrong and Carole Richardson—were falsely convicted of the bombings and later released
Downloading PDF. Please wait...
Tuesday 07 September 2010

‘I was arrested on 30 November 1974. I was dragged from my bed at home in Northern Ireland. I was handcuffed and thrown in the back of an army personnel carrier with squaddies in.

They proceeded to kick and stamp on me. I had no idea why they were doing this. I didn’t come from a Republican background.

They took me to a police station and held me incommunicado for 16 to 18 hours. Then the door opened and there were two policemen there. I was punched in the face. Ten minutes later they took me to the interrogation room.

There were two policemen behind a desk.

They sat me in the chair and gave me a statement that they’d said had been made by Paul Hill. He was admitting to the Guildford bombs and he was naming everyone he knew, and I happened to be one of them.

When I said I didn’t know what this was about, the torture started. They hit me from behind. This went on for about an hour and then they took me back to the cell.

Next morning they brought me out again. One policeman took me to the window and said, “We threw a guy out of this window three weeks ago and he broke his back. If you don’t co-operate you’ll get the same treatment.”

Then he struck me in the head and put me in the search position, and put clamps on my fingers and toes. When I fell they picked me up by my testicles. This went on all day.

Then they took me to England. They handcuffed and hooded me, and took me to the airport and flew me to a foreign country to torture me.

Back then it was called state kidnapping, today it’s extraordinary rendition. They took me to a police station and marched me through around 15 policemen, who spat on me, punched me and called me a “murdering Irish bastard”.

I sat on a concrete bed and tried to make myself small. Five minutes later, the hatch dropped down and a man came and told me to stand up.

He told me to do press ups and squats. This went on all through the night. They came for me on Monday morning and took me to another place.

They stripped me naked and took me to the interrogation room. Policemen who came in were encouraged to grab my testicles and stamp on my toes.

I was kept naked when I went back to the cell. At about 3am they came in with police Alsatians. I was pinned to the wall by them. Then they took me out, handcuffed and hooded me.

They dragged me out of the car, forced me to my knees and put a gun in my mouth. They told me to make my peace with god. I thought they were going to shoot me.

They took me prison where they proceeded to torture me again. They told me they were going to shoot my father and murder my mother.

After five days I signed the confession—and on the basis of that I was charged.’

To buy a CD of the Was it like this for the Irish? Muslims—the new suspect community meeting at Marxism with Gerry Conlon’s full speech go to www.bookmarksbookshop.co.uk or phone 020 7637 1848. Human rights solicitor Gareth Pierce and former Guantanamo Bay detainee Moazzam Begg also spoke at the meeting 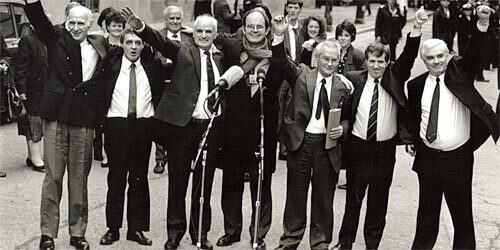