Getting steeled in the struggle

SOCIALIST WORKER was warmly recieved by steel erectors during their fight for reinstatement at Wembley Stadium, reports Simon from north west London:

“Because of the articles in Socialist Worker, the workers are now discussing how to support the European Social Forum, especially the march on Canary Wharf in support of the cleaners.

“At a mass meeting of 100 workers to discuss their victory, we sold 28 papers.”

A mood to fight for jobs in Coventry

SOCIALIST Worker supporters in Coventry rushed to build support for Jaguar workers whose Browns Lane plant is threatened with closure.

Gail reports, “We launched a petition to save Jaguar on a stall in the city centre on Saturday. The level of feeling in the area was shown by the number of people signing the petition.

“People were queuing up to sign. They were disgusted, and wanted to support a fight at the plant to save jobs.

“We took the petitions to the union stewards at the plant to show the level of support the workers have.

“We sold 35 copies of Socialist Worker on the stall.”

AS STUDENTS start their new year, the thirst for socialist ideas in the colleges is proving to be massive.

Kate says, “We went to a freshers’ fair at the University of East London. The response was fantastic. We sold over 40 papers, and over 40 students joined the Socialist Worker Student Society.

“There was no group at the college last term, so it shows you can walk into any college and get things moving. Three students came to a meeting to start getting organised in the college.”

Hotting up in the civil service

SOCIALIST WORKER sellers are out building sales in among civil service workers. So 15 papers were sold at Albert Bridge House in Manchester, and 12 were sold at Moorfoot Department of Work and Pensions in Sheffield. 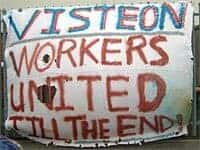 Cleaner waits for deportation: ‘My crime? I took a job to survive’