Guernica: shock and awe in paint

It was four in the afternoon. The Junkers, Heinkels and Italian Savoias flew straight over the main street of the town of Guernica dropping splinter bombs and incendiaries. Within three hours, the town was a skeleton and over 1,600 of its people were dead. It was 26 April 1937.

Five days later, in Paris, Pablo Picasso began to sketch the figures for the painting that would keep the name of Guernica on the lips of each succeeding generation, as the techniques of “saturation bombing”, the deliberate and terrible assault on civilians, became the norm of modern war.

The ancient capital of the Basque nation, with the ancient tree where its first parliaments met, marked the route to Dresden, Hiroshima, Fallujah.

And as each generation confronts its own Guernica, its own experience of “modern war”, Picasso’s extraordinary work is born again.

This is the paradox that it addresses – if “modernity” and “civilisation” are intended to represent progress, peace and the eventual liberation of all humanity, how can these words be attached to deliberate acts of terror and mass slaughter?

In 2007, the question is asked everywhere and by growing numbers – how can such barbarism mark a civilised society?

Picasso was already renowned when the Spanish Civil War began in July 1936. Spanish by birth, he had lived most of his adult life in Paris and had last visited Spain two years earlier.

His nomination by the Republican government as director of Madrid’s great Prado Museum was symbolic – and a gesture of the great artist’s support for a Republic under attack from General Franco’s fascist armies.

In January 1937, Picasso drew a series of strip cartoons called “Dreams and Lies of Francisco Franco” in the best traditions of grotesque political caricature.

But his work was not marked by a particularly political awareness. In fact the previous couple of years had produced only the print Minotauromachy which drew again on his favourite themes – childhood, innocence, myth, the symbolism of the bullfight, and the contradictions of sexual desire.

The destruction of Guernica gave him the theme for the mural he was to paint for the Spanish Republican government’s pavilion at the Paris International Expo of that year. This was just 100 metres or so away from the marble eagles of Nazi Germany’s house.

Yet there is no specific reference to the firebombing in the painting – nor indeed to the Civil War or the Spanish Revolution, which was facing internal repression as Picasso was painting.

All the figures in the painting are timeless – only the single electric light bulb at the centre of the mural refers to the modern world.

What in early drafts were recognisable, shattered buildings in the background are now angular and broken forms.

The figures have a monumental power – they seem almost classical. To the left the Madonna and Child is a familiar pairing – yet here they are broken, terrified, the woman screaming, the child’s neck probably broken.

There is no sense of higher powers here, only the terrible immediacy of the attack. On the other side of the canvas another woman screams, and between them faces and bodies are running.

Under their feet lies the shattered body of a dead or wounded soldier, his sword broken in his hand.

What can the sword do, after all, against the bombs, the electric eye of the modern world?

And all the pain, the anguish of the work is centred on the twisted horse at the mural’s centre. It would be hard to imagine a more shattering sound than the one we hear, and we can always hear it, from the open mouth of the horse.

But if his scream is directed at the bull, it seems strangely indifferent, cold, distant. The bull figures through all of Picasso’s work, perhaps as a symbol of Spain – though in his personal vocabulary it also represents sexual power and masculinity.

The bull’s impassivity is a kind of moral defeat, a cowardly refusal to see the agony all around it – and that too is a kind of death.

The painting is in black, white and shades of grey – a dramatic contrast to the complex use of colour in Picasso’s earlier work. The effect is to make it more universal, more permanent and enduring. Guernica is not “about” Spain, but about war.

What gives it its power, and makes each generation discover it for itself, is that it captures the distress and the shock of that moment of realisation that when the bombs begin to fall everything that is human is in danger.

This is an extract from a poem written by Paul Éluard, a surrealist poet and friend of Picasso, in August 1937 as a response to the painting

Death the heart turned over 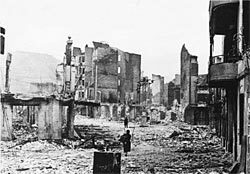