Hollywood: the red and the blacklist

This article is over 16 years, 7 months old
Fifty seven years ago screenwriter Norma Barzman and her husband Ben were blacklisted from the US film industry. She spoke to Simon Basketter about Hollywood, the witch-hunts and why she is proud to have been a a member of the Communist Party
Downloading PDF. Please wait...
Saturday 29 October 2005

The most famous question of the anti-communist witch-hunts in America was “Are you now or have you ever been a member of the Communist Party?”

For Norma Barzman the answer is simple, “I’m very open about it, I was a member of the Communist Party. I had been in the party from February 1943 to February 1949. I am very proud of that. Everything I did I would do again.

“I became progressive during the Spanish Civil War,” says Barzman. “I joined the Communist Party because I saw they really were fighting fascism at home and abroad. They were organising the guilds and unions.

“I came out to Hollywood on my twenty-first birthday, in 1941. When got there I fell in love with the way the Communist Party operated in Hollywood — and you could fall in love with it. It was not just that these people were glamorous, it was what they were doing.

“What they were doing was so admirable and I just wanted to be part of that. Making films together, helping each other. I have never seen creative people working together in that way before or since.” Norma learnt to write screenplays at the School for Writers (soon to be on the government’s list of subversive organisations), which taught scriptwriting and left wing politics.

“A lot of those guys were really macho. When I met my husband, he explained that scriptwriting was too tough for women, so I shoved a pie in his face. I did seem to forgive him. I worked as a reporter for the Hearst papers. I was the first girl reporter for a Hearst paper in LA working in a sea of macho.”

Norma had met Ben Barzman at a left wing Hollywood fundraiser in 1942. A year later they were married by “a defrocked rabbi who had been tarred and feathered and run out of Montgomery, Alabama, for defending the Scottsboro boys and would eventually join the Communist Party”.

The Scottsboro boys were nine black teenagers who were falsely accused of raping two white women. The prosecutor famously told the jury, “Guilty or not, let’s get rid of these niggers”. Eight were sentenced to death, including two 14 year olds. Even though one of the accusers admitted in 1932 that the rape had not taken place, the last of the men was not released until 1950.

“What we did in the community in the fight against racism was important. There was the Sleepy Lagoon boys’ case, these teenagers who were framed for murder in Los Angeles. They were held for two years and were going to be executed. This was despite the fact that they had been on the other side of the city when the murder took place. We raised money and wrote pamphlets eventually getting them out.

“We spent a lot of time helping refugees who had escaped fascism in Europe — helping them get started. The party had being doing all this in the 1930s before I arrived. They organised the unions.

“By 1941 the Screen Writers Guild had been built and there were big union struggles in Hollywood in the 1940s. It’s no accident they gunned for screenwriter Lester Cole, and the others in the Hollywood Ten. It was because the studios really had to break the unions in Hollywood.”

The House Un-American Activities Committee (HUAC), headed by Senator Joseph McCarthy, went into session in Washington in 1947 to investigate communists. FBI men set out to deliver pink-coloured subpoenas to 19 Hollywood people—mostly writers—requiring them to appear before the committee to answer questions about their political affiliations and those of others.

By the time the hearings got under way, 11 were called, including the playwright Bertolt Brecht, who testified for an hour, ridiculing the committee. He caught the next flight out of the country.

The remaining ten refused to answer questions saying it infringed their constitution-given right to free speech and free assembly. The Hollywood Ten were all jailed for contempt of Congress, among them was the director Edward Dmytryk.While in jail he changed his mind and named names — including Norma Barzman.

A group of stars, including Humphrey Bogart, Lauren Bacall, Danny Kaye and Larry Adler, flew to Washington in protest. When they came back from Washington, many of the group retreated. Bogart was the first to do so. He was only then able to continue working after declaring, “That trip was ill-advised, even foolish … I have absolutely no use for communism.”

But many people never worked in Hollywood again. At one point every Hollywood producer had a list of 2,000 names of people not to be employed.

There were specific reasons why the witch-hunts focussed on Hollywood. According to Norma “If it wasn’t for the Communist Party Los Angeles wouldn’t have been an organised town. Not just pay and pensions, which we won, but things like screen credits.

“Up to 1947 the left was in the ascendancy. The right were lying in wait for us, waiting for something to latch onto. I remember on the set of ‘Back to Bataan’ John Wayne hugging my husband and calling him a dirty communist. But it was still a time when Ben just responded by calling him a dirty fascist.

“But John Wayne was active. Robert Montgomery, Ginger Rogers’ mother and a group of others were anti-union and anti-labour. They weren’t really very effective until the Cold War became the excuse to break the left.

“The blacklist was a way of attacking all the unions and progressives. They kicked out all the teachers and the doctors — thousands of workers lost their jobs. They attacked Hollywood because it was high profile and made it easier to create a climate of fear. The blacklist was a small part of what was going on in this country at the time.

“It was no longer an informal blacklist run by the movie studios, but a blacklist where you could no longer work in the US at all.

“People couldn’t get any kind of job. I know people who were turned down for a job in a filling station. Most of the people who named names gave in to fear. Some of them said they did it to fight the red menace. But they did it to work.

“The blacklist was effective. It nearly wiped out the left in America. Later there were the anti-war, women’s and civil rights’ movements. But McCarthyism wiped out the idea of a united left for a generation.”

On a July day in 1947, the Barzmans were relaxing over a gin and tonic when Groucho Marx, in a pith helmet and pushing a pram, passed by and made a cryptic warning.

A young woman in a convertible soon followed him. At the time, the future Marilyn Monroe was simply a friendly face on her way to a party at Vincente Minnelli’s. She warned them that the cops at the bottom of the hill were asking who was going to the Barzmans’ address.

The lawyer Martin Gang was the man to see if you got a subpoena. Norma recalls, “Gang asked Ben to come to his office where he was told that for $16,000 a subpoena would disappear. Gang knew the right people

in Washington. The right person was a committee member from California, Richard Nixon — $15,000 for Nixon and $1,000 for Gang.”

The Barzmans eventually fled to Europe. They lived in London and Paris, where there were thriving communities of blacklisted Hollywood exiles helping one another to find work in European television and films.

“There was no point in coming back to Hollywood, where neither of us could have worked,” she says. “There were subpoenas out for us and we knew we would not inform on friends.

“We went to England, where we made a film called Christ in Concrete (1949). Originally we thought we were going to “break the blacklist” and come back to Hollywood, not spend 30 years in Europe. In July 1950, we showed Christ in Concrete to a group of miners in France and after the screening they cheered.

“I wrote another film, Finishing School, which showed 16 year old girls in favour of abortion. It was never shown in America, apart from on 42nd Street (an area for pornographic movies). That really hurt and dramatised what the blacklist was going to mean.

“I was writing television and I had never even seen it. I did a whole number of episodes of the Robin Hood television series and a couple of others. I cannot even remember the pseudonyms I used. I wrote one about a rat — someone who rats on his comrades. You could slip the odd thing in.

“The studios bosses knew people were using pseudonyms and often arranged things behind the scenes. It meant they could slash prices, which was part of the idea.

“I wasn’t credited for The Locket or other movies and Ben didn’t receive a credit for El Cid.”

Norma said, “We felt rejected. That’s one reason, when we did start making money, after working on El Cid, we bought a second house in the south of France next to Picasso.

“We went Hollywood. I think having the big houses and the big family, and going a little berserk was throwing our noses at the blacklist. I felt guilty we weren’t doing anything political any more, partially because we had no passports. We gave money but that was it.”

One film they could work on was Costa-Gavras’s, Z, a political movie. “Ben was working on L’attentat [a movie about the Algerian independence struggle] and this led Constantin Costa-Gravas and Jacque Perrin to send Ben the screenplay for Z. I had read the book and thought it was terrific.

“Ben rewrote the screenplay in a way that followed the documentary nature of the book. We helped them make a deal with the Algerians, permitting the movie to be shown there.”

As left wing as ever, Norma believes a blacklist-style witch-hunt could happen again. “I think our liberties are being taken away little by little,” she says. “Building a climate of fear has the same purpose now as it did then. I still have the odd FBI guy at my book signings, which is just hilarious. But there are plenty of people who are frightened.

Norma Barzman’s memoir the Red and the Blacklist is priced £14.99 Friction books. Available from Bookmarks. Phone 020 7637 1848 go to www.bookmarks.uk.com

Leveson report lets the press, politicians and police off the hook 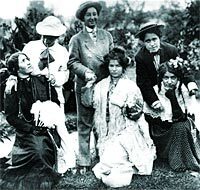 Sexuality and the system