This article is over 19 years, 0 months old
ANYONE WHO listened to Radio 4's Today news programme on Monday morning would have been shocked by the story of a south London family facing eviction. The mother spoke of how one of her children, now eight years old, had repeatedly tried to commit suicide, once tying a flex round his neck, on another occasion throwing himself in front of a car.
Downloading PDF. Please wait...
Saturday 25 January 2003

ANYONE WHO listened to Radio 4’s Today news programme on Monday morning would have been shocked by the story of a south London family facing eviction. The mother spoke of how one of her children, now eight years old, had repeatedly tried to commit suicide, once tying a flex round his neck, on another occasion throwing himself in front of a car.

The family was made homeless seven years ago. Since then they have been driven from one temporary bed and breakfast hostel to another. Now they face eviction after the hostel they are living in, in Southwark, south London, complained of the eight year old’s disruptive behaviour.

A child psychiatrist spoke of how such behaviour, as well as the suicide attempts, was rooted in the constant moving from one miserable place to another. A housing lawyer told the BBC that such cases are increasingly common. Such cases are the grim reality behind a housing scandal that blights Britain. New Labour promised to end homelessness when it came to office in 1997. Ministers pledged to tackle the misery of families condemned to bed and breakfast hostels.

Instead things have got worse. There are now officially 84,800 households living in temporary and emergency accommodation in Britain. Many are in bed and breakfast accommodation. That figure has increased by 86 percent since 1997 to an all-time record level. Government figures show that there are now 750,000 families with children who are living in poor housing.

These children are more likely to suffer from illnesses such as asthma, allergies, depression and even tuberculosis. The immediate answer to the housing crisis is to use the vast number of empty homes in Britain. According to the official Empty Homes Agency, there are a staggering 753,188 empty homes in Britain.

Over 80 percent are kept empty by private landlords, banks and building societies. This helps keep house prices and rents sky high. In London alone there are over 100,000 empty homes while 48,000 households are living in temporary bed and breakfast accommodation. The government could use its powers to requisition homes which are deliberately kept empty.

In the longer term tackling the housing crisis means building the decent, affordable homes people need. Instead housebuilding in Britain is now at its lowest level since the 1920s, and is barely at the level needed just to replace existing houses. One effect of this is that house prices in many parts of Britain are simply beyond the reach of ordinary people.

In London, for example, the average house price is now £232,830! Housing experts are now warning of a repeat of the kind of housing crash we had in the late 1980s and early 1990s, with the return of ‘negative equity’ and a surge in repossessions and the misery they bring. The growing housing crisis makes a planned lobby of parliament next week over council housing especially vital.

FACT 1 AROUND £1,000 of the yearly rent paid by every council tenant does not go into maintaining and improving housing. The government pockets £2.8 billion of rent money a year and uses it for other purposes.

FACT 2 TONY BLAIR is ready to send British troops to war against Iraq. He will call them ‘our boys’ and ‘heroes’. A survey by the Crisis housing charity found that one in four people sleeping rough in Britain have been in the armed forces.

COUNCIL tenants and trade unionists, bringing local councillors with them, will be lobbying MPs at parliament next Wednesday, 29 January. Our demand is direct public investment in council housing with no strings attached.

This issue is important for everyone, whether they are a council, housing association or private tenant, or a mortgage payer. Look at the scandal of homelessness, of record numbers living in temporary accommodation, of inadequate housing, of the insanity of house prices. If you put all this together the idea that the market can provide decent housing is laughable.

We need decent, secure, affordable and democratically accountable housing. This government constantly talks of ‘best value’. Well the ‘best value’ answer to the housing crisis is public investment in council housing. After the Second World War governments understood that. Council housing was seen as an essential public service. People were happy and proud to leave the private sector and to become council tenants.

Council housing should not be last resort housing for people who can’t get anything else. It should be quality housing available for all, and for future generations too.

The Unison, GMB, Ucatt, TGWU and RMT unions are all backing it, as are the official groups of Labour councillors on Southwark and Liverpool councils. MPs on the platform at the Westminster Central Hall rally will include Gerald Kaufman, Andrew Bennett, Austin Mitchell, Brian Iddon and Lynne Jones. Brendan Barber, the new TUC general secretary, will also be speaking.

NEXT WEEK’S lobby of parliament takes place as the government prepares to take some crunch decisions over the future of council housing. Tony Blair is committed to bringing all council housing up to an official ‘decency standard’ by 2010.

His government’s original plan to meet that commitment was straight out of Margaret Thatcher’s book. It planned to hand 200,000 council houses a year to housing associations and other private housing companies. Tenants would pay through higher rents and loss of security for any work on their homes.

But many tenants have rejected this blackmail and campaigned against ‘stock transfers’. Last year one of the biggest privatisations was defeated when tenants in Birmingham voted against it after a united campaign by tenants and trade unionists. There have been many more examples too. That resistance means the government has been forced to announce a ‘review’ whose results are due soon.

The government knows that its privatisation target is simply not going to be met because of tenant opposition. But it doesn’t dare abandon its ‘decent homes’ target. That target is a key pledge for many Labour councillors and the government fears that ditching it would cause turmoil in Labour’s ranks, not to mention anger among tenants.

So the government has been forced to look at putting extra public money in to meet the pledge. It doesn’t want to give that directly to councils so it has come up with a plan to channel money through so called Arms Length Management Organisations (ALMOs). These are wholly owned by the local councils, but set up as a separate companies. In reality they are a halfway house to privatisation.

They are designed to dampen down opposition to the government, and allow it to return to full privatisation in the future. Everyone should oppose plans for such ALMOs. If the government is giving public money to such companies, why not just give it to councils directly so they can build the homes needed? 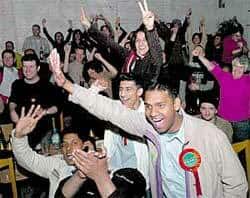 Every campaign can help to set the agenda