How militant traditions are born and reborn

This article is over 17 years, 0 months old
The second column in our series looks at how new groups become radicalised
By Kevin Ovenden
Downloading PDF. Please wait...
Saturday 18 June 2005

Few of Karl Marx’s words have produced more scorn than his observation that society is “more and more dividing into two hostile camps” — capitalists and workers.

Surely there are all sorts of layers in between and many divisions among even those who consider themselves workers? That’s true and has been since Marx’s day.

But the nature of the divisions has changed and continues to change, radically.

For example, at the start of the twentieth century, skilled engineers were regarded as a cut above other manual workers and a conservative layer within the working class.

As late as the 1970s skilled engineers were still encouraged to look down on unskilled workers, but they were certainly no longer considered a bastion of conservatism.

Two things happened to change that. The first was the transformation of production. The spread of the production line across industry undermined the division between skilled and unskilled workers.

Automation required a certain level of skill from all workers and at the same time squeezed out areas of specialism which had previously fed elitism.

Changes in workers’ organisation and ideas did not simply reflect the gradual transformation of production. There were sharp turning points.

Engineering workers were the backbone of the strike wave that began during the First World War and peaked after it.

The initial issue was protection of their status in the workplace. But at a time of immense political crisis — war — strikes based on this sectional interest moved rapidly in a militant, socialist direction.

When the next big leap in capitalist production came, the bosses were keen to keep these traditions out. The late 1930s and early 1940s brought terrific growth in “new industries” such as car manufacturing, and light engineering.

Plants were built largely away from the previous centres of militancy — in places such as Oxford, West London, Coventry and Birmingham.

They drew in workers from industries that were already in decline. But they also attracted large numbers of new workers, including women.

The discipline of the production line was matched by the bosses’ determination to prevent workplace organisation.

They relied on the recent memory of mass unemployment and on rooting out militants.

At first many of the new workers were, in the words of one Communist activist, “green”. But a determined strategy by activists linked to the Communist Party swelled union membership.

This was not simply about getting names on union cards, but centred on leading battles to improve pay and conditions.

In the 1950s and 1960s, as the economy boomed, those battles were short, sectional and almost always victorious, but at their centre were people who also agitated around political issues.

What transformed these narrow struggles into a more general resistance to the capitalist class was the offensive against union organisation launched by the Labour government at the end of the 1960s.

It was not only the well organised sections of workers that responded.

They accounted for the lion’s share of the surge in union membership.

These layers had fallen even more sharply from a privileged position at the start of the century into suffering all the pressures experienced by the industrial working class.

Clerical workers in the nineteenth century were regarded as middle class. Their pay, status and even dress made them more akin to managers.

The enormous expansion of white collar work throughout the twentieth century meant pushing the vast majority down into the ranks of the working class.

There were plenty of managers. But for each one of them came many more admin and office workers.

And the diktats from top managers cut against the promise of climbing up the career structure—always been held out as a big difference between white collar and manual workers.

There is a similar pattern of sharpened class division in other areas of the economy that have grown since the 1970s.

Working for a bank can mean badly paid, insecure work for the majority, while top managers grab fabulously higher salaries.

There are layers in between — branch managers, area managers and the like. But they are pulled between the two basic “hostile camps”. 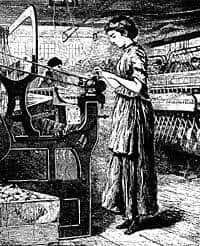 Birth and development of a powerful force