This article is over 12 years, 4 months old
Mark L Thomas talks to workers in Doncaster in Yorkshire about the enduring impact of the Great Miners’ Strike on the area
Downloading PDF. Please wait...
Tuesday 02 March 2010

The biggest and longest mass strike in British history ended 25 years ago. Around 165,000 miners struck for a year from March 1984. They were fighting Tory prime minister Margaret Thatcher’s attempts to close pits, sack tens of thousands of workers and smash one of the most militant sections of the working class.

On 5 March 1985, thousands of miners lined up behind their pit lodge banners and marched defiantly back to work. Their heroic strike was over.

Today, the legacy of the Great Miners’ Strike is bitterly contested. Some say that the miners were destined for defeat from the start.

Others argue that Thatcher’s assault destroyed any power that the unions had and any hope of working class struggle.

Both arguments are wrong.

It’s true that the defeat of the miners sent shockwaves throughout the entire working class.

The Tories ravaged pit communities. Many sacked miners never worked again. For young people, shutting down pits destroyed all hope of getting a decent job. Drug use soared.

Stainforth one of the many pit villages that surround Doncaster, South Yorkshire. In 1984 there were 14 pits in the area.

“Stainforth is a very different village today from when the strike started,” says Ann Hird, the wife of a striking miner. “Young people relied on the pit for work. It generated work for the whole area.”

The defeat was devastating. In the years that followed the Tories closed one pit after another.

“It became like a ghost town. Youth crime went up. There was nothing for the kids to do,” Ann said.

Yet resistance to Thatcher had brought communities together and pulled many people into their first political activity. It showed the potential power and resourcefulness of the working class.

During the strike Thatcher mobilised the full force of the state against the miners.

The police laid siege to pit villages – and other working class communities. The Tories claimed that miners received substantial strike pay and cut off social security payments to them.

In fact miners got just £1 a day if they went out picketing. Solidarity was crucial to sustaining the strike.

“Every pit had a city that it twinned with,” recalls John Westmoreland, a local activist and lecturer in Doncaster. “The collection buckets were always full and no one touched the money.

“Yorkshire miners had a high status – because they were standing up to the police.”

Trevor Kirk worked at International Harvester’s factory in Doncaster for 25 years. He was a shop steward in the AEEU engineering union, which is now part of Unite.

“We had collections in the factory every week,” he said. “Many workers were sons of miners or had brothers down the pits. Support was very solid.”

Miners’ wives became centrally involved in sustaining the strike. “We struggled during the strike but there were also happy times,” remembers Ann Hird. “Communities came together.

“Thatcher didn’t think the resilience among the miners was there. The support from miners’ wives shocked her. She thought we wouldn’t get behind the men, but we did.

“The sewing factory over the road from where I lived collected money for the strike. The local supermarkets did collections. There were collections everywhere.”

Ann stresses the difference that solidarity made to the strikers: “At Christmas we got a massive parcel from trade unionists in Hull. It had food, a teddy bear and other presents for my daughters.

“We didn’t know these people, but they sent us things that were luxuries for us, things we hadn’t seen for a year.

“It gave you a feeling of comradeship and community. That’s what socialism is about. Thatcher will never have any idea about that.”

The strike shook up people’s ideas.

Joe Henry was a miner in South Elmsall, near Doncaster, in 1984. “I remember coming back from picketing in Nottingham,” he says. “We had got a hammering from the police.

“The whole journey home was spent arguing about whether we needed the police at all.”

The strike made wider political discussion part of the pits.

“After the strike, in 1988, the Tories brought in Clause 28 that banned the ‘promotion’ of homosexuality in schools., added Sue.

“Members of the Socialist Workers Party at Armthorpe pit moved a motion in the union branch. The first line said, ‘Homosexual love is of equal value to heterosexual love’.

“There was a big row, but the motion was passed.”

Joe says the miners could have won. He points to a couple of weaknesses behind the defeat of the miners’ NUM union:

“The first problem was the failure of other trade union leaders to deliver real support – industrial action – for the miners.

“But there was also a weakness within the union. NUM leader Arthur Scargill wanted mass pickets, but his lieutenants didn’t have the same approach.

“As Scargill said afterwards, the problem wasn’t too much mass picketing, it was that there wasn’t enough.

But he was trying to move the party away from its union roots and was terrified that the miners would win by militant methods.

Thatcher defeated the strike but she didn’t smash the NUM. Andrew Buckley was a miner at the Armthorpe pit during the strike. “In the three years after the strike, miners still had the highest number of strike days of any group of workers,” he said.

Those who think that the miners were doomed from the start should look at what Thatcher herself said about the strike. Nine years later she admitted that, “We were in danger of losing everything,” and that the strike “could indeed have brought down the government”.

The miners could have won – but leaders of the labour movement let them down. As we face the possibility of another Tory government, we need to learn the lessons of the strike for the battles ahead.

‘We need a bit of that passion and comradeship we saw in the strike back today. Whoever wins the election is going to cut services and they always attack the weakest.

No one wanted to bail out the pits. Thatcher talked about “loss making” and “uneconomic” pits, yet many had huge resources of coal.

The Hatfield colliery in Stainforth has hundreds of years of coal underneath it.’

Ann Hird, wife of a striking miner in Stainforth

‘When the strike started the women got together in a pub.

We said we needed to do something and set up a soup kitchen.

“We had about 30 involved in our women’s support group. We went out collecting money.

At the height of the strike we were feeding lunch to hundreds.

It was exciting. You desperately wanted to win and at the beginning that seemed possible. I hated Thatcher anyway, but by the end I hated all the Tories. Everyone did.

By the summer of 1984 we were going picketing ourselves.

We went on a women’s picket at Calverton in Nottingham.

We took the police by surprise – there were 200 of us!

The police corralled us on this piece of grass.

It was mayhem, exactly like what they did at the G20 protests in London last year. They kettled us then arrested quite a few.

The police were swines.’

Joyce Sheppard was married to a miner at Askham 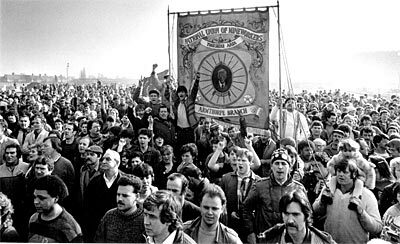 Photos of the miners’ struggle 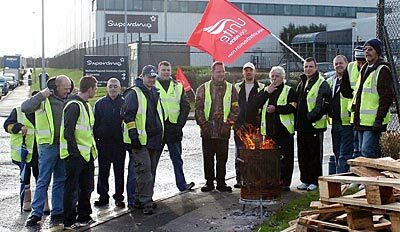 A tradition of militancy remains