How Victor Serge kept the flame of the Russian Revolution alive

This article is over 9 years, 6 months old
Victor Serge was a writer and revolutionary who lived through the darkest days of the 20th century. George Paizis looks back on his life
Downloading PDF. Please wait...
Tuesday 04 December 2012

Victor Serge was a revolutionary anarchist who went to Russia in 1919 and joined the communists. His articles, books and novels capture the revolutionary experience in the first half of the 20th century.

He was born in Belgium in 1890 to a family of impoverished Russian political exiles, sympathetic to the populist terrorist movement Narodnaya Volya.

He wrote, “I learnt… that the only meaning of life lies in conscious participation in the making of history. It follows that one must range oneself actively against everything that diminishes man, and involve oneself in all struggles which tend to liberate and enlarge him.”

But the poverty they lived in taught him other lessons. His younger brother Raoul died of malnutrition aged nine.

Serge joined the youth wing of the Belgian Socialist Party. But he left in 1908 when the party supported the formal takeover of the African territory that is now the Democratic Republic of Congo.

His disgust with the conservatism of the socialist movement pushed him towards the other main current in Belgium’s pre-war working class movement—anarchism.

The anarchists rejected mainstream society. They refused to follow careers or take part in parliamentary politics. He was attracted to the uncompromising “individualist” anarchists. They turned to acts of illegality such as theft.

Serge became editor of the individualist paper L’Anarchie, though he came to criticise what he called their collective death wish. But when the police arrested him he refused to disassociate himself from them. He was sentenced to five years hard labour.

He went to Spain when he was released in 1917. The February Revolution in Russia had inspired a workers’ uprising in Barcelona. This was led by anarchists. They rejected all authority and so refused to seize power. This allowed the ruling class to regroup and crush the uprising.

Serge went to revolutionary Russia, arriving in January 1919 in the middle of the civil war. Five months later he joined the Bolshevik Party. He saw that it had followed the logic of the revolution—seizing political power to defend it and smash the ruling class.

Leon Trotsky had formed the Red Army, which was defending the revolution against the Whites. These counter-revolutionaries used the most brutal means in an attempt to restore the old Tsarist ruling class.

Serge agreed with the need for repressive measures to defend the revolution from the Whites and their imperialist backers. But he was fully aware how they endangered freedom.

He wrote, “Thousands and thousands of people were prepared to get themselves killed, supported by the awareness that they were carrying out a vast, necessary and noble task… working for the future and the whole of humanity—the fraternity of workers, the Commune—the fraternity of peoples, the International—the liberation of women—the security and well-being of children—the cleansing, ceaselessly and fiercely, of their own ranks”.

But the revolution faced enormous difficulties. The Bolshevik leader Lenin said “It is a terrible misfortune that the honour of beginning the first Socialist Revolution should have befallen the most backward country of Europe.”

The Red Terror grew. The power of the party’s bureaucracy expanded—as did its corruption and privileges. From this Serge drew an important lesson for us, what he called revolutionaries’ “double duty”.

He argued socialism “has to fight within itself against its own reactionary ferments. [To survive] it is constrained to pick up the worn weapons of the old regime, and these arms are double edged… It therefore needs criticism, opposition and civic courage and by 1920 we were already well short of the mark.”

The revolutionaries won the civil war but at a terrible cost. In order to survive the revolution would have to spread to a more developed country.

In highly industrialised Germany, revolution had ended the First World War in 1918 and still simmered on. Serge got himself posted to Germany. But an uprising planned for the end of October 1923 didn’t happen.

The German Communist Party and the Communist International—which had been set up to spread revolution—had not prepared the working class politically for insurrection. The call for an uprising was met with uncomprehending passivity.

Yet in the week following the failed uprising, the top ministers and generals of the German army attended a reception in the Russian Embassy to celebrate the anniversary of the October Revolution!

Serge believed there was a contradiction. On the one hand was permanent revolution, which meant defending and spreading the gains of revolution. On the other was the bureaucracy’s growing idea that socialism could be entrenched in one country.

Lenin realised what a threat the bureaucracy had become. He wrote, “You think you are driving the machine, and actually it is driving you and suddenly other hands than yours are on the wheel.”

By the time Serge returned to Russia in 1925 Lenin was dead. Serge joined the opposition, working with Trotsky to defend the principles of the Revolution.

But by 1928 the bureaucracy, now clearly led by Joseph Stalin, defeated the revolutionaries. Serge endured prison and then exile in Orenburg, Central Asia. He began writing novels.

Serge got to Europe in 1936. He travelled to Belgium and France and contacted Trotsky again. They soon fell out, but he never ceased to admire the “old man”. Fleeing the Nazi occupation of France, he found refuge in Mexico but died a pauper.

Reaching out to the anarchist movement

Though Victor Serge became an official of the Communist International, he remained sympathetic to the best in anarchism. In 1920 he wrote a pamphlet, The Anarchists and the Experience of the Russian Revolution, appealing for reform of anarchism.

It said, “Instead of being a subjective and utopian doctrine, the possession of tiny sectarian groupings, it should embrace the working class and revolutionary movement as a reality and not as a myth.”

He reminded anarchists of their important theoretical contributions to the movement—including hostility to the state, anti-patriotism, expropriation of the ruling class.

All of these ideas differentiated them from the supine social democrats of the mainstream labour parties in the Second International.

But now it was the Bolsheviks who were making them a reality, through “the will to accomplish and defend the Revolution by taking power to defeat the ruling class.”

He argued the anarchists should stop criticising from the outside and come to help the revolution to survive and spread to the rest of Europe.

Novels that reveal mechanics of motivation

Serge favoured writing novels because of what he saw as the shortcomings of “historical work”. He felt that the novel could penetrate into humans to reveal the mechanics of motivation, its inner workings and contradictions. He wanted to represent “what most people live inwardly without being able to express”.

In The Case of Comrade Tulayev, he wrote about the murder that became Stalin’s excuse to arrest and murder his opponents. In Conquered City he presented Petrograd in a winter of the civil war. He recorded the brutal deprivation but also people’s sense of humour.

His style used Unanimism, a radical literary current that rejected the individualism of the classic bourgeois novel with its focus on a central individual or family.

The Unanimists argued that the new task of literature was tracing a collective human consciousness. Unanimism portrayed different social groups in movement under the influence of common historical forces.

There is a new unabridged edition of Victor Serge’s Memoirs of a Revolutionary (£10) translated by Peter Sedgwick and George Paizis. Other works by Serge worth reading include Revolution in Danger: Writings from Russia 1919-1921 and his novel The Case of Comrade Tulayev.

All are available at Bookmarks, the socialist bookshop—go to www.bookmarksbookshop.co.uk or phone 020 7637 1848. See also the Serge internet archive at www.marxists.org

Revolution in the 'progressive' bloc 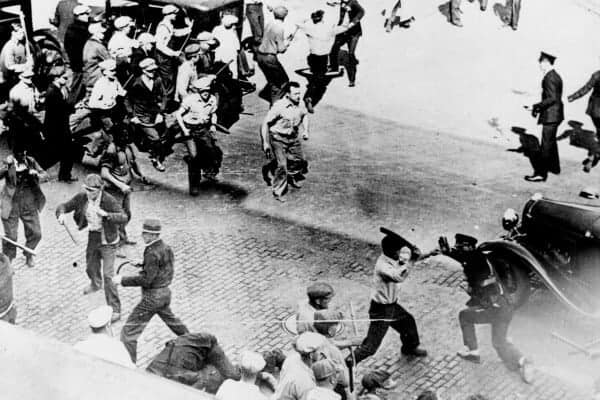