This article is over 16 years, 2 months old
The BNP’s attempts to organise mean the lessons of a previous movement against the Nazis need to be learned
By Anindya Bhattacharyya
Downloading PDF. Please wait...
Saturday 22 October 2005

Who Shot the Sheriff? — Alan Miles’s excellent new film charting the history of the Rock Against Racism and Anti Nazi League movements of the 1970s — is set to go on tour in January, sponsored by the Amicus union.

If the reaction from the film’s launch gig in London last month is anything to go by, it is sure to be a hit with audiences around the country. It is a fascinating look at how politics and music came together to defeat the Nazi National Front (NF) in the 1970s.

Its release is timely. Today’s major Nazi organisation — the British National Party (BNP) — is gearing up for council elections in England and Wales next May.

As part of its campaign the BNP has called its first national demonstration in years. The Nazis hope to attract a mob of racist thugs to Keighley in West Yorkshire on Saturday 5 November to whip up a frenzy of hatred against Asians.

The fact that fascist organisations are confident enough to come out on the streets again is a direct consequence of the corrosive climate of racism promoted by the right wing press and encouraged by New Labour.

The situation in the mid-1970s was similar in many ways. A Labour government was in power, but had bitterly disappointed its working class voters by pursuing ever more right wing social and economic policies.

In this climate of despair and discontent, the right sought to pin the blame for Britain’s problems on black and Asian people. This opened the door to the organised fascists of the NF, which started to hold demonstrations and stand in elections.

“The NF seemed like a serious threat at the time, almost overwhelming,” remembers Balwindar Rana, then a young Sikh activist in Gravesend, Kent. “The mass media was really supportive of the NF — all the right wing media gave them lots of coverage, presenting themas respectable.”

Paul Holborow was a leading activist with the International Socialists — the forerunner of the Socialist Workers Party—in east London. He later became national organiser of the Anti Nazi League.

“The NF gained more and more support throughout the early 1970s,” he says. “It scored 16 percent in the West Bromwich parliamentary by-election in 1973. And in 1977 it pushed the Liberals into fourth place in the Greater London Council elections.”

But the electoral push was only one prong of the Nazis’ strategy. The other prong was violence on the street — vicious racist attacks on blacks and Asians, as well as violence directed against trade unionists, leftists and anti-racists.

Jan Nielsen was a student activist living in Stratford, east London, in the 1970s. She recalls how the Nazis would be on the streets “virtually every Saturday, from Barking through to Stratford and on to Brick Lane”.

Those who campaigned against the NF were under particular risk of attack, she adds. One woman she lived with was badly beaten up by a Nazi woman carrying a brick in her handbag. Socialist Worker sellers were another frequent target for NF violence.

But as the Nazis built up their forces, so did those opposed to them. Trades councils, local Labour Party activists and the wider left would work together on anti-racist and anti-fascist campaigning, says Paul, though often without much in the way of clear political direction.

There were also constant arguments between those who wanted to physically prevent the Nazis from marching and those who viewed the NF as a legitimate political party whose “democratic rights” should be respected.

Many activists realised the importance of challenging the Nazis on the streets. The clashes punctured the respectable image that the NF had built up in the media and revealed the Nazi core of the organisation.

Black and Asian young people were organising themselves against racist attacks by the NF. Balwindar helped form the Indian Youth Federation in 1968 in response to a previous wave of racism sparked by Tory politician Enoch Powell’s infamous “rivers of blood” speech.

By the mid-1970s, Balwinder’s organisation was heavily involved in protests against the NF, bringing coaches of young Asians from Gravesend to join countermobilisations organised by the anti-racist left.

These clashes intensified, culminating in a series of violent demonstrations. One of these was in April 1977 at Wood Green in north London, where anti-fascists physically confronted and partially broke up an NF march.

The crucial moment came in August 1977 when the Nazis tried to march from New Cross in south east London down to Lewisham, at that time a predominantly black area.

“Lewisham was the turning point,” says Balwindar. “We smashed the NF and broke up their march. It was the first time one of their marches had been broken up. The police cancelled the march and put them onto trains.”

A great deal of planning and political argument went into the Lewisham anti-fascist mobilisation, recalls Jan. “We organised a very large contingent from our college. We were determined to physically confront the Nazis and stop their march.”

Several women students brought flares with them, she adds. “As the NF march came towards us, they fired the flares into their ranks. The Nazis scattered and ran and we surged into them.”

Local black youth had also turned out to the counter-demonstration in large numbers, adds Jan. They joined in, throwing stones and rocks at the Nazis. The police responded by attacking anti-fascist demonstrators — at which point the crowd turned on the police.

“It was an amazing experience,” says Jan. “These young black kids knew that the police were protecting the Nazis, the same police that regularly harrassed and arrested them.

“So when at one point someone said ‘go to the station’, meaning the train station, we all ended up going to the police station instead. A police motorbike was set on fire.”

Humiliation for the Nazis

The outcome of the Lewisham battle — comprehensive defeat and humiliation for the Nazis — gave a huge boost to the anti-fascist left. But it brought political problems in its wake.

“Lewisham was an inspiration and a warning,” says Pat Stack, who was a student in Portsmouth at the time and active in bringing students to anti-NF demonstrations around the country.

“The press went absolutely hysterical—but at the left, not at the fascists. Senior Labour politicians called us ‘red fascists’ and said we needed ‘mental help’. They were absolutely condemnatory, presenting us as a mob intent on fighting the police.”

But the reaction from ordinary people was quite different. “The phone at the SWP offices rang non-stop the next day with people saying they wanted to help fight the Nazis,” says Paul Holborow.

The groundswell of support for physically confronting the NF, together with the threat of a witch hunt against the far left from senior elements in the Labour Party, led to the launch of a national campaign to challenge the NF on the streets — the Anti Nazi League (ANL).

The ANL was formed to unite all the forces on the left that wanted to drive the NF off the streets. Crucially, it brought together three major components, says Paul Holborow — the revolutionary left, trade union activists and a rising generation of left wing Labour Party activists.

The ANL set up branches up and down the country, providing literature against the NF, picketing Nazi meetings, organising counter-demonstrations and leafleting door-to-door during elections where the NF was standing.

The united campaign struck a chord and built rapidly. “Everywhere we went we handed out ANL stickers and badges,” says Jan. “Young black and Asian people would tear them out of our hands. It was quite remarkable and absolutely inspirational.”

The ANL also forged what was to become a crucial link with Rock Against Racism (RAR), a group of musicians, photographers and artists allied with the punk scene. RAR had already come together in response to racist comments by rock guitarist Eric Clapton.

RAR put on benefit gigs for the anti-Nazi cause up and down the country, bringing together punk rock bands with reggae artists in unprecedented mixed events. “RAR fitted in with the ANL like a hand fits a glove”, says Pat Stack.

The RAR gigs culminated in two huge anti-Nazi carnivals and marches, one at Victoria Park, east London, in April 1978 and another in Brockwell Park, south London, in September that year.

The carnivals each attracted over 80,000 people to demonstrate their opposition to the NF and hear acts such as The Clash, Tom Robinson, Steel Pulse and X-Ray Spex. They catapulted the ANL into national consciousness.

Pat notes that RAR’s intervention was also crucial in winning young people and the punk scene to anti-racist politics. “Punk was about getting up the establishment’s noses — but one way of doing that was wearing a swastika,” he says.

“Many bands at the time had racist and Nazi followings in their audiences, such as Sham 69.

“Getting bands like that to play RAR gigs was crucial in breaking that and getting the punk scene identified with anti-fascism.”

The success of the ANL and the prominence of RAR meant that the momentum was now with the anti-fascists. ANL’s supporters swiftly expanded to include the Communist Party, more trade unions, and Tony Benn, who was then a Labour cabinet minister.

“The anti-fascist movement really came into existence when the ANL was established,” says Paul Holborow. “The mood was there previously, and was expressed in a number of episodes. But the ANL and the first carnival in particular cemented it all together.”

The mobilisations and demonstrations continued for the next two years — including violent clashes with the police, who used riot shields and truncheons to turn viciously on ANL protesters.

Blair Peach, a teacher and an ANL activist, was killed by Special Patrol Group officers raining down blows on his head in Southall in 1979.

But these tragedies did not detract from the fact that the ANL’s mobilisation had broken the Nazis.

The NF could not meet in schools, church halls or pub back rooms without confronting pickets.

They could not march without encountering anti-fascists determined to physically stop them. The “no platform for fascists” campaign stripped them of their respectability. Where they were once feared, they were now scorned.

Their street organisation paralysed, the National Front turned in on itself and swiftly became a violent rump beset by faction fights. A poor result in the 1979 general election sealed their fate.

Martin Webster, the NF’s national organiser at the time, admitted why this had happened in a court case in 1982. The sheer presence of the ANL, he said, had made it impossible to get Nazis out on the streets, had dashed recruitment and cut away at their vote. 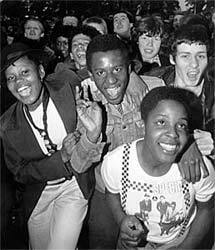 Music was crucial to the movement