This article is over 15 years, 3 months old
It is 50 years since the Hungarian people overthrew the Stalinist regime in our country, in a chaotic yet magnificent revolution. Memories of the Second World War were not distant in 1956.
By GM Tamás
Downloading PDF. Please wait...
Saturday 28 October 2006

It is 50 years since the Hungarian people overthrew the Stalinist regime in our country, in a chaotic yet magnificent revolution. Memories of the Second World War were not distant in 1956.

The revolutionaries knew perfectly that they did not want to return to the autocratic police state and oligarchic capitalism dominant before 1945, as they were clear that they would never again countenance the pseudo-communist tyranny of the early 1950s.

Disappointed workers and intellectuals who had previously fallen for the promises of the Communist Party, and who kept the anti-fascist enthusiasm of the post-war years alive, did not, like their successors in 1989, turn in desperation to market utopia and Nato tutelage.

The common denominator of most revolutionary currents in the October days 50 years ago was democratic socialism.

There was a powerful common will to keep the common ownership of the major industries and of banking, state education and the health service, to subject state enterprises to workers’ control with ownership vested in workers’ councils.

The revolution wanted to preserve national independence and declare neutrality, leave the Warsaw Pact (the military alliance of the Soviet Union’s client states), restore a multi-party system, hold free elections, establish freedom of speech, and to keep the hegemony of the working class embodied by a renovated Communist Party and left wing social democrats.

It also wanted to show solidarity with the East European and the non-aligned (mostly Asian and African) countries.

On 4 November 1956 the revolution was crushed by the unlawful aggression of the Russian army. The puppet government of János Kádár imprisoned thousands and hanged and shot hundreds in retribution, including the leading members of the revolutionary government, old Communists without exception.

The Kádár regime softened slightly by the mid-1960s and managed to raise levels of consumption by increasing competition, inequality and indebtedness. It created inner peace by breaking the backbone of the Hungarian people by the usual mixture of threats, punishments, rewards and bribes.

The Kádár system abandoned all manner of Communist verbiage and did not exact ideological loyalty – it was content with passive acquiescence. People could travel to the West, read anything except openly anti-Soviet literature and be comfortable on condition that they would not mention the Kádár era’s origin in the frightful terror of 1957-8.

Thus the forgetting of 1956 is nothing new. The neoliberal capitalism of the present, however unpopular, is not challenged by any major movement. The recent riots and demonstrations in Hungary have been by now completely shanghaied by the far right shouting nationalist anti-Communist slogans – even though there are no Communists, especially not in government.

The so-called centre left coalition in office, with its austerity measures and ultra-right privatisation plans, wants to grasp the straw of 1956 as a “left” issue.

It cannot do otherwise since their leaders are former post-Stalinist apparatchiks, thus formally “left wing”.

The official right stresses the motif of national independence, railing against foreigners, while announcing quite openly that their economic policies would not be any different from those of their enemies in office.

Whereas there is not much difference in substance, there is a lot of hostile noise from the two camps. Some observers are afraid of renewed violence in the days to come. Both camps are playing the game of paranoid fears. One speaks of “fascist” danger, the other of the “Communist” peril.

There is slightly more reality to the former, and none at all to the latter, the former Communists being docile disciples of the World Bank. The legacy of the 1956 revolution – democratic socialism – is almost unmentionable. Crowds are fighting over various versions of enormous lies.

It is quite ironic that you can read excellent studies of the revolution and its aftermath abroad – see the articles in the latest issue of International Socialism, Revolutionary History or, in Germany, Sozialistische Hefte – but not very much in Hungary, except the tired old cliches about “democracy” and “totalitarian dictatorship” or “foreign satraps” versus “ethnic pride”.

The working class is silent, looking on all these quarrels as exotic fights of the Martians. Left wing intellectuals are frightened and quiet – these days, far right websites are publishing their pictures, home addresses, home phone numbers and e-mail addresses to facilitate intimidation and brutal threats.

Another feature of these days is racist panic-mongering – using an ugly case of road rage involving ethnic Roma perpetrators, while the mainstream press is majestically cursing the “vulgar and irrational” masses perhaps desirous to eat.

Nothing could be sadder than this anniversary, which is going to be celebrated by crowned heads, bourgeois prime ministers and presidents, neoconservatives and nationalists. All are equally remote from the revolutionary days of 1956 with its dream of a tolerant, equal and free society, free of exploitation and bureaucratic power.

GM Tamás is a former dissident, a former member of the Hungarian parliament and now a professor of philosophy in Budapest. 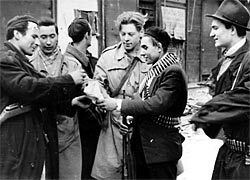