I want to know how my brother died

This article is over 17 years, 11 months old
Mikey Powell, a 38 year old father of three, died in police custody in Birmingham on 7 September last year. He was hit by a police car, and eyewitnesses say officers beat him with batons and sprayed him with CS gas. Six officers were suspended last wee
Downloading PDF. Please wait...
Saturday 31 January 2004

‘A ABOUT 4AM we got a phone call from my brother in law in Birmingham. My husband told me that Mikey was dead. I refused to believe it. Later I called back myself. So we got up, with my two year old daughter Kiara, and me being seven and a half months pregnant, to drive from Hertfordshire to Birmingham.

When I saw the crime scene, with tape all over it, that’s when it hit me.

My mum had called the police after seeing Mikey in a distressed state, wandering up the road when it was gone midnight. He had smashed his own car window. She’s 70 years old and called the police hoping they could help him calm down and see what was wrong.

Mikey had been hit by a police car, they had CS gassed him, used their batons and thrown him in a police van. Then they came back an hour and half later and said he’d died on the way to the police station.

The next morning a police press release said he’d died on the way to the hospital and they couldn’t resuscitate him. I thought, hang on, it’s crucial to know what happened. It’s not quite right. My shock turned to anger. I had to get my head around what happened.

Why did Mikey die? How did Mikey die? I’ve not been able to grieve for him. I’d love to be able to speak to the policeman who drove the car. At first I didn’t think about the race issue. I was incensed that the police could knock anyone over, black, white or Asian, that they could treat him like an animal.

But it really hit home when I saw that BBC documentary, The Secret Policeman, about racism in the police.

Mikey was a black man in a predominantly black area. All the anger built up in me again. Nothing’s changed since Stephen Lawrence. Even if top level officers say they want to stamp out prejudice, there are the words but no action.

We don’t want a police liaison officer. Mikey was in the custody of the police when he died. We’re not comfortable with the police in our home.

The suspension of those officers is positive but it’s been a very long time coming. And there have been suspensions in other cases, like the deaths of Roger Sylvester and Christopher Alder.

But no one has ever been convicted for a death in custody.

When we had the funeral for Mikey the police did allow a slow procession through the streets. We said we didn’t want their presence to be felt. But there was a complete turnaround when we had our march last November. They wouldn’t support the march and told us we would have to pay for it.

We wanted a march for two reasons-firstly to raise awareness of what happened to Mikey and secondly because we want justice.

There was no word about suspensions then. In any other job or industry someone would be suspended pending an investigation. Why should the police be any different?

We battled over the march until the eleventh hour. We said either way we are going to march.

They finally let us go ahead. But when we got to the police station they had blocked the road. Beyond the barriers you could see police in riot gear.

We had stressed this was a peaceful march. Why did they feel they had to intimidate the family and protesters?

Without doubt the march was an important show of support. Mikey was popular in the community and they turned out for him. We were extremely happy to see the 500 people come out, black, white and Asian. It gave us strength. We weren’t doing it by ourselves.

I hope that with these suspensions we’ll get more support. We’ve not heard anything from the government. Do we expect to hear? No.

Even after the post-mortems we don’t yet know his cause of death. He was fit and active. There were no problems with his heart or brain, no weak lungs.

He was a family man. He loved looking after his three sons, who are four, 11 and 13 years old. Mikey was a factory worker. He started off as a labourer and had just been made team leader.

I named my daughter, the one he never saw, Michaela, after him.

For me it’s been a test of strength. I didn’t realise how strong I am. I’ve had to deal with a whole host of emotions. Now I’m up for campaigning, giving my voice and opinions. If I’m invited to speak at meetings, if I can be there, I will.

Mikey wasn’t the last person to die in custody. It can’t just keep happening where people are dying in custody and it’s a ‘coincidence’.

If that’s the system, then we’ll battle with the system.’

For news of the campaign and to get involved go here

Police unit had a history of violence and abuse

SINCE New Labour was elected in 1997, some 325 people have died in police custody, says campaign group Inquest.

You never hear ministers on news bulletins condemning this tragic waste of life or see it as front page news.

A Home Office report last year admitted, ‘During 2002/3 there was a significant increase in the number of people from ethnic minority groups who died during or following police contact.’

In 2002 the government was forced to ditch the narrow definition used to compile statistics and include anyone who died after ‘significant contact with the police’. This has uncovered a total of 104 deaths from 1 April 2002 to 31 March 2003.

The West Midlands police had the second highest number of those who died during or after contact with the police-11 people, nearly one every month. This is the force that is supposed to have cleaned up since the days of the notorious West Midlands Serious Crime Squad.

The squad was set up in 1974. Its officers wrote out false confessions and used torture to force suspects to sign them. One victim, Keith Twitchell, was a victim of their plastic bagging technique. ‘Somebody put a bag over my head and it was clamped tight around my mouth and eyes,’ he said. ‘I remember struggling and heaving but then I must have gone unconscious.’

Keith ‘confessed’ to robbery and manslaughter. It was 12 years before he was cleared by the court of appeal.

Many of the squad’s victims were black. They also targeted Birmingham’s large Irish community in the wake of the 1974 Prevention of Terrorism Act.

The squad helped jail the Birmingham Six, in one of the most notorious incidents of innocent people tortured and terrorised into confessing to crimes. The six were in prison for 16 years for the Birmingham pub bombings before being declared innocent and released (see right).

As the roar of complaints got louder, the Met was chosen to head an investigation into the squad. The resulting Hay report was never made public. But some of the truth about the squad did get out, including ‘interviewing techniques’ and officers’ failure to take notes.

Even so, the squad continued its reign of terror. It wasn’t disbanded until 1989.

The Police Complaints Authority’s report in 1993 recommended just seven officers should face disciplinary charges. But only four were ever punished-with minor disciplinary offences.

As late as 1999 the squad’s miscarriages of justice were still being exposed. Already 30 convictions had been quashed by the court of appeal, with lawyers saying that ‘dozens’ more could follow.

‘My cousin Michael Powell was arrested and taken to Thornhill Road police in Birmingham where he died. Now I know how he died. The whole of Birmingham knows how he died. But I have to say he died in suspicious circumstances.

The police will not give us any answers. Now all the family can do is join with all the other families who have lost members while in custody because no one in power is listening to us.

Respect in the news

A demand for Respect 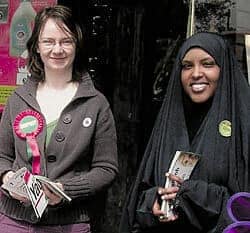 A moral victory for Salma Yaqoob in Birmingham