If workers fight, will bosses migrate?

This article is over 11 years, 10 months old
We are told that globalisation has transformed the world of work and that the economy now transcends states, people and communities. Kevin Doogan argues that this is a bosses’ tale aimed at creating insecurity among workers and stifling resistance
Downloading PDF. Please wait...
Tuesday 17 August 2010

There’s a great myth about the way work is organised today—that workers are power­less because employment is unstable. They say that if anyone dares to challenge the employers, the firms will disappear to another country where wages are lower and workers more flexible.

It’s important to challenge this myth. Otherwise the idea spreads that workers and their organisations can’t fight.

It quite easy to put forward facts that refute these claims.

The proportion of workers who have been with the same employer for ten years or more is growing faster than the rate of employment in the US, European Union (EU) and Canada. And temporary agency staff only account for approximately 1 percent of the workforce in the EU and the US (see ‘figure it out’ box on right).

So how did the ideas about instability and powerlessness become conventional wisdom?

In the 1980s and 1990s, the rise of neoliberalism led to a particular way of representing and understanding the world.

It stressed the importance of globalisation, technological change and corporate restructuring.

If neoliberalism meant anything, it was that markets were the only way to run the world, the irrelevance of the nation state and the globalisation of the economy.

We were told that industries moved overseas in search of cheap labour, and capital had become “footloose”.

A company could ship out with all the ease of a travelling circus and employers could outsource and offshore at will.

Capital was perceived to operate outside of territorial waters on the high seas of global markets, leaving the overwhelming feeling that globalisation was a phenomenon that happened “out there” imposing its logic on countries, companies and communities.

All this meant that the balance between workers and capital had shifted decisively in favour of capital.

Now it is true that there has been a decline in employment in some production industries in the developed economies.

And some US companies have established manufacturing bases in the ­maquiladoras—export assembly plants—in Mexico.

There is evidence of some manufacturing firms moving some operations to eastern Europe.

Call centre employment has grown in India, and China has become a base for the export of low-end goods.

However, the bigger picture of change in the international economy tells a different story.

When it comes to foreign direct investment (buying productive assets) the dominant trend is that capital does not go overseas in search of cheap labour, but moves into the developed countries to gain access to markets.

Honda, Toyota and Nissan set up manufacturing bases in England, not because it was the cheapest location in the world, but in order to produce for the single European market.

Nevertheless, the threat to relocate has become a powerful bargaining chip in negotiations with trade unions.

Research by academics in Cornell University in the US has shown that this threat to relocate is routinely raised by employers during contract negotiations with unions and recedes once the ink is dry on the contract.

Survey evidence from the Bureau of Economic Analysis in the US shows the national and international operations of US multinational corporations.

It reveals that 30 years of corporate globalisation has left the balance between the domestic and overseas operations little changed at roughly 70 percent domestic and 30 percent overseas.

Companies have increased sales and employment overseas, but this was to a very large extent matched by expansion in the domestic economy.

And the recession has sharpened this trend. Despite the odd headline here and there, overseas expansion does not increase during economic downturns.

A Financial Times analysis of job losses in the first nine months after the start of the recession showed 4,000 job losses at 17 locations due to work being moved abroad, but noted that this was a miniscule part of the 700,000 total redundancies in the same period.

Also, there are signs that the decline in overseas movement might not be temporary due to the recession. Recent evidence suggests a partial but significant reversal of trends.

Newsweek has reported a survey of European companies which showed that for every six operations moving overseas one returned in 2003—but five years later the trend had increased to one in three.

Following earlier examples from Powergen and Abbey National, BT is returning call centre activities from South Africa and India because it is more effective to operate from Britain.

There is also evidence of Indian companies, such as ICICI OneSource and Tech Mahindra, opening up in Britain.

When bosses threaten to go abroad it’s more often bluff than reality. But that’s not the impression you often get from trade union leaders.

At the beginning of the decade, not long after the telecoms crash which claimed some three million jobs in the US, the AFL-CIO union federation launched a campaign against “Exporting America” which pledged to challenge corporate myths about outsourcing.

In a curious appeal to economic nationalism they tried to shame the employers by offering the most frightening forecast of US jobs under threat as a consequence of outsourcing.

Tragically the bosses’ threat to relocate was then amplified by the union campaign against job losses.

More recently in Europe, Fiat has offered to “repatriate” the production of the Panda from Poland to Italy—but only after the unions had agreed to extraordinary concessions, restrictions on the right to strike and productivity guarantees.

Once again we are reminded of the disastrous consequences when trade union leaders get suckered into competition with workers from other countries.

The economic landscape has shifted radically and in ways that were initially difficult to predict.

Most surprisingly, given that we have witnessed the worst recession in 60 years, the rise in uneamployment has been less than in the recessions of the early 1980s and early 1990s. There are also different trends in relation to older workers.

In the 1980s and 1990s older workers left the labour market in droves. Today, the raising of retirement age and the restructuring of pension provision means that people are staying in work longer.

The irony of the claim that there are no jobs for life any more is that workers are being forced, in many instances, to remain in the same job with the prospect of deferred retirement and reduced pensions.

The second reason for what economists call the “lagged response” in employment is explained by the way in which the locus of the crisis has shifted from the private to the public sector.

In truth there is very little attention paid to the public sector labour market, and scant recognition given to its economic importance.

The Tories would have us believe that the welfare state lives like a parasite on the back of the private sector.

But far from being parasitical the welfare state is essential to the functioning of the system.

Education, health and social services are critical sources of employment.

In the US the health sector made the second largest contribution to job creation during the so-called new economy boom—the only sector to expand since the onset of the crisis.

In the EU, employment growth in health and social services was ten times the European average and accounted for two thirds on all additional jobs during the growth years.

And, education, health and social services are essential to the economy and to the reproduction of the workforce.

This means that an assault on the contemporary welfare state is of a different character to the restructuring of public and private industries under Margaret Thatcher.

It is very hard to fight large-scale closures of steel works and coal mines if the employers and government say there is no market for steel or coal.

The situation is different when it comes to public services.

There are more than 1,100 hospitals in Britain and more than a hundred universities.

It’s not true there is “no market” for what they produce—and it is not as if they face the same kind of closure programme that was forced on coal and steel.

There will be an assault on jobs and benefit levels, but importantly they are opening up another front on pay, pensions and user costs.

It is relatively easy to attack workers if you want to take their jobs—it is another thing to make the staff who provide essential services work for less pay.

The coalition government’s austerity measures are frightening to contemplate, with departmental cuts ranging between 25 and 40 percent.

Yet we must remember that the political calculus is very different compared to the 1980s.

We are dealing with essential public services and it is hard to swing the wrecking ball without doing long-term damage to the competitiveness of the economy.

Austerity measures are driven by political decisions rather than market demand.

Among other things, the government will have to defend the allocation of public funds between welfare and warfare, in which the pursuit of the “national interest” will demand the maintenance of nuclear weapons while the benefits of the poor will be squeezed.

The nearest historical precedent for the austerity offensive in Europe is found in the mid-1990s among the countries preparing the financial conditions to set up the euro.

The effect was to generalise wider public sector trade union opposition across continental Europe in defence of welfare services and benefits.

The austerity offensive in Europe now is on a far greater scale and depth than the 1990s and will be more protracted.

This regime of austerity will be a long and an intensely political period in which the cabinet of millionaires will try to argue we are all in the same boat facing the difficult choices in the long term interest of the country.

The class nature of the offensive will be very difficult to conceal.

Kevin Doogan is Jean Monnet Professor of European Policy Studies at the University of Bristol and author of New Capitalism? The Transformation of Work, Polity Press £16.99

Order your copy from Bookmarks, the socialist bookshop. Phone 020 7637 1848 or go to www.bookmarksbookshop.co.uk

What do you think about the issues raised in this article?

Send your views to [email protected]

The resistible rise of Benito Mussolini and Italy's fascists 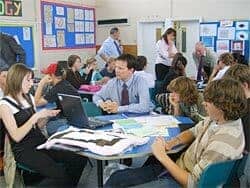