Industrial struggle: ‘You have to be the leaders’

This article is over 11 years, 5 months old
The conference session on the SWP’s industrial work saw an important discussion over how to mobilise resistance in the unions.
Downloading PDF. Please wait...
Tuesday 11 January 2011

The conference session on the SWP’s industrial work saw an important discussion over how to mobilise resistance in the unions.

A wide range of activists from both public and private sector workplaces spoke of the rage at the government’s attacks.

Michael Bradley, an SWP industrial organiser, said, “If we’re right about the student protests—that they represent the beginning of a process—then we have to get ready for that.

“The 26 March TUC demonstration is a vital part of that. If you’re an SWP member you have to be identified as the fighter—the person who gives everyone else hope that we can take them on and win.”

Council workers from Birmingham and Barnet in London spoke of the importance of the TUC demonstration in giving confidence to workers to strike.

A health worker reported that Unison in the north west has booked three trains to the protest, and that two are full.

Unison is asking every branch to put on coaches, saying that they want 20,000 union members from the region on the march.

Health and postal workers spoke about the urgent need for a fight against privatisation.

Jess, a teacher in south London, said, “The increased level of anger at the coalition means there can be a raising in the tension between those who look purely to a broad left electoral strategy and those who look to rank and file activity.”

A London firefighter spoke about their recent strike. He told how the depth of militancy grew in the dispute but noted, “due to the lack of effective rank and file organisation, we were starting from scratch to build a counterweight to the union leaders.”

One Unite activist said that the Jerry Hicks election campaign for Unite union general secretary meant that “the union leadership are looking over their left shoulder, not their right”.

A motion was passed urging the widest possible mobilisation to build the TUC demonstration and push for coordinated strikes.

A motion reiterating the importance of socialists not taking up any position where they can hire and fire other workers, and when they should take positions in unions, also passed. 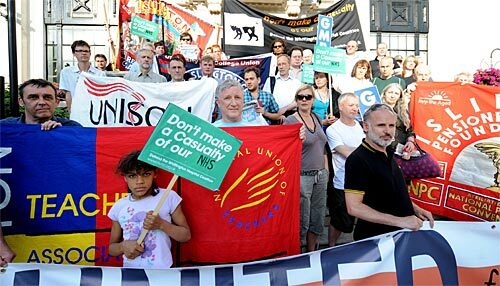