Iraq under occupation: ‘After bombings people stoned the US patrol’

The bombings on Tuesday last week marked one of the bloodiest days of the occupation. How have Iraqis responded?

If the perpetrators wanted Iraqis to fight among themselves, they failed. The Iraqis are more mature politically. They say the attacks were caused by occupation. The occupying forces are not protecting the Iraqi people – which they should be under international laws. They are responsible for the killing. After the bombings in Karbala, in southern Iraq, and Kazimiya, a Shia Muslim area of Baghdad, people responded by throwing stones at the US troops.

What are the origins of the divisions between Sunni and Shia Muslims in Iraq?

Strife between ordinary Sunni and Shia Muslims has never been a major feature of Iraqi history. But, when Iraq in its modern form was established in 1920, the British rulers chose to favour a section of society. This is an old imperialist trick. They promoted a small minority, pushing them to power and helping them to keep their privileges. This minority then feels that its privilege depends on the imperialist power.

For around 80 years the state was ruled by a small group of Sunnis. That continued under Saddam Hussein. The most important ministries and industries were in the hands of his clique, who were mainly Sunni Muslims.

You were in Iraq recently. What were conditions like?

Iraq is one of the poorest countries in the world now. That is not just because of Saddam. Iraq was destroyed through sanctions – one of the greatest crimes in history. Now a government has been imposed upon Iraq by the same people who imposed the sanctions. The other disaster faced by Iraqis is the spread of depleted uranium left over from weapons used by the occupying forces. This is a crime against humanity. Electricity in Baghdad is on for around 12 hours each day.

Fuel is rationed – in a country swimming in oil. Iraq used to refine oil and export fuel. But the US have destroyed the refineries so that companies like Halliburton can refine the oil and sell it back to us at their prices. The US want to create a government in Iraq under their protection, which will allow US corporations to come in and monopolise everything.

The US government has another sword on the neck of the Iraqis-the debts. These were built up during wars supported by the US. Under sanctions there was the ‘oil for food’ programme. But under this programme it was prohibited to pay interest on Iraq’s debts. So it kept accumulating.

A third of Iraq’s income had to go to other countries like Kuwait because of the 1991 invasion. Where is the compensation for Palestine or Lebanon when Israel went in and destroyed these countries?

What do Iraqis think about the occupying forces?

When they see US patrols Iraqi people look through the troops as if they don’t exist. If they were welcome, the Iraqis would at least make eye contact. The troops are just seen as unwanted foreigners. The Iraqis want them out – that’s the general feeling.

The US troops use tactics that infuriate the Iraqis. For example, when US tanks go on patrol along the motorways they drive their tanks through the barrier in the middle of the motorway if they want to turn around. There are millions of incidents like that.

I was incensed to hear that the US and Britain do not count the number of Iraqi dead. In Britain, when we had foot and mouth, they counted the number of dead cattle. Iraqis are less important to them.

What are people saying about the prospect of elections?

Politics is alive and kicking, although people are not organised into parties. There is a widespread demand that everyone should have an equal say in who governs the country. When the Shia cleric Sistani said he wanted direct elections, the idea didn’t come out of his head – it reflected what people in the street said. The Shia clerics are not appointed by the state or anyone else – their influence depends on how many followers they have.

The US know if there is a real democracy they will be told to get out. Handing over sovereignty is not the same as the troops leaving. The US want to give legitimacy to an unelected group of people who they select. They are saying that there will be 15 people appointed from each province of Iraq.

The US want this lot to sign agreements about how long the troops can stay and whether the oil, electricity and telephone system should be privatised. There are strains within the interim authority. Some people are genuinely against the occupation but do not think the Iraqi people are strong enough to fight it.

There are some who are straightforward US stooges and some former Ba’athists. Most of the authority’s members are outside Iraq. They are always jetting around the world – people don’t call them the interim authority, they call them the tourist board.

The education system is in a bad state, hospitals too. Industry is on its knees.

On 20 March, people around the world will demonstrate against the occupation of Iraq. What should we be demanding?

In Britain people should demand real democracy in Iraq.

The US and British war machines should get out and should be forced to remove the depleted uranium and cluster bombs. They should pay reparations for the war and the occupation, and Iraqis should be allowed to run Iraq.

Occupation Watch works with other organisations in Iraq to compile reports on human rights abuses. The following extract is taken from reports available in full from their website, www.occupationwatch.org

This case occurred in what was once a dormitory for students at Mustansiriya University and is now a barracks for the Third Infantry Battalion. At 7.25pm a soldier on the roof of the building was shot in his arm. Twenty minutes later, Aziz Issa entered Palestine Street. As soon as he arrived near the main gate his car was shot.

Issa was hit but it was unclear whether he was killed immediately. The car began to burn and people were eager to help Issa, but they were blocked by soldiers, who began shouting and pointing their weapons. None of the soldiers attempted to help Issa. They just stood there, watching the car burn.

The soldiers did not tell Issa’s family what had happened. For two days, they searched for Issa, until a friend told them about the burning car on Palestine Street. Three days after the accident, the victim’s brother succeeded in retrieving a bag of ash that the army says is his brother.

Around 97 percent of the population of Iraq are Muslims. They are divided into two main groups, Shia and Sunni, with different interpretations of the religion. Around two thirds of Iraqis are Shia Muslims and they form the overwhelming majority in the south of the country.

There is a long history of Sunni and Shia Muslims uniting in revolts against British colonial rule. But both the British and Saddam Hussein’s dictatorship attempted to divide Iraqis along sectarian religious lines. Successive Iraqi governments have been dominated by Sunni Muslims.

The city, in southern Iraq, is the site of shrines which are sacred to Shia Muslims. Thousands had flocked to the city for the Ashura celebrations, a religious festival, when six bombs went off in the city killing around 106 people.

A further 65 were killed in a simultaneous explosion in a Shia area of Baghdad, the Iraqi capital.

After the 1991 Gulf War, the United Nations imposed strict sanctions on Iraq. According to the UN’s own figures, these killed over 500,000 Iraqi children. US forces behave like a colonial regime

Out to rule the world 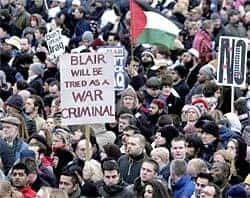