At a few minutes past noon on Easter Monday 1916, Irish Republican leader Padraic Pearse emerged from the General Post Office in Dublin and read out a proclamation announcing the birth of the Irish Republic. Overhead a banner announced, “We serve neither King nor Kaiser”.

Pearse had arrived there following a rising in Dublin which had caught the British government, army and police off guard.

Indeed it had even caught the more moderate sections of Irish Republicanism off guard. When they heard rumours of the rising they sent out public messages saying there were to be no activities over the Easter period by Republicans.

A small but determined minority had ignored the order and the rising had gone ahead, with the added involvement of the Irish Citizen Army, led by the revolutionary socialist James Connolly.

Though it was greeted with little public support or enthusiasm by Dubliners, or indeed the Irish population as a whole, its impact was to be enormous.

It would give birth to the movement that over the next few years would drive Britain out of 26 counties of Ireland, and lay the basis of the modern Irish state.

Furthermore it sent shock waves around the world. Here, at the height of the First World War, a rebellion had been staged in Britain’s oldest and closest colony.

British shock and panic quickly turned to fury and brutality. For six days a battle was waged in the streets of Dublin, before the Republicans were finally forced to surrender.

Their relative isolation was proved when the fighters were arrested. Crowds gathered that were at best curious and at worst hostile to the insurgents.

However that tide would quickly turn, and the little known Republican leaders who signed the proclamation would become household names to succeeding Irish generations.

The tide first began turning when the full ferocity of the British response began to emerge. Sixteen of the leaders were executed. Day after day another set of executions would take place.

Details of the executions would quickly become public knowledge. The most shocking being the execution of Connolly. He was in terrible pain and was so badly wounded that he had to be strapped to a chair in order to be executed.

In addition to the executions, 3,500 people were arrested and interned.

People may have thought the rising foolish, but few could begin to consider this response as anything other than extreme in its brutality and cruelty.

What had begun as an action of a small minority would, over the next five years, become the symbol for the overwhelming majority of the population in their desire to see British rule smashed in Ireland.

Why that change? First of all, although the rising was isolated, the issues that drove the rising were real and had deep roots in Irish history and the experiences of everyday life under British rule.

British rule had been brought to Ireland by bloody force. It had involved robbing people of their land, religious persecution and draconian laws.

It had overseen the great Irish famine and allowed over a million people to die of starvation, while mainly English landlords had evicted the starving from their homes and food stuffs were being exported.

Furthermore it had denied the Irish population any real say in how the country was run. As a result of this Irish opposition to British rule had created periods of revolutionary resistance, such as the United Irishmen rebellion of 1798 and the Fenian uprising a generation later.

Such periods tended to be followed by longer periods where moderate reform would be called for. These movements sought to use parliament and elections to push through “home rule”—a form of devolution—for Ireland.

Although the home rule movement had at times had a radical tinge to it, in the years leading up to the rising it had become a deeply conservative and cautious movement.

Its entire strategy was based on holding the balance of power at parliament in London between Liberals and Conservatives, thus forcing the Liberals to grant home rule.

The full bankruptcy of this approach became clear as Britain embarked on the path to the carnage that was the First World War.

The Liberals demanded that Irish nationalists support the war effort, with vague promises of home rule when the war ended. Nationalist leader John Redmond responded by acting as a recruiter in Ireland for the British army. Two of his sons were killed in the war.

Against this background of betrayal the young radical republicans became restless for action. They were joined in their restlessness by Connolly.

Four years before the rising Connolly had been a key leader in the major confrontation between the workers and bosses in Dublin, which had resulted in the Dublin lock out.

This hugely heroic struggle was eventually defeated by a combination of the British government, Irish employers, the Catholic church and, crucially, the betrayal of the TUC union leaders.

Now Connolly viewed a world heading to imperialist carnage with horror. His horror and impatience were further increased by the first talk of partitioning Ireland into two separate states north and south.

With chilling clarity Connolly predicted that such partition would create a “carnival of reaction” on both sides of the border, setting Protestant worker against Catholic worker.

He had come to the conclusion that there must be a rebellion, and lined up the Citizen Army alongside the Republican forces on that sunny Easter Monday morning.

The initial isolation of the rising therefore belied the undercurrents that would turn it into an event of huge historical importance.

If the executions and arrests began to provoke sympathy, then the growing threat of conscription turned the sympathy into growing militant resistance.

As the First World War dragged on the British government, which up to that point had made the entry of Irish men into the British army a voluntary affair, began to talk openly of conscription in Ireland.

Such was the fury at this proposal that even Redmond opposed it. But it was not the moderate nationalists, but the militant Republicans who would grow dramatically in size and influence as a result of the crisis.

The war ended before conscription could be introduced. But in the general election at the end of the war the Republicans—standing on a ticket of abstention from the Westminster parliament and the setting up of their own parliament—won overwhelming support everywhere apart from the north.

The triumph of the Republicans destroyed Redmond’s more moderate nationalists. The Irish Republican Army (IRA) grew until it could claim an armed unit in every parish in Ireland.

The British declared the new parliament illegal and for the next three years the IRA waged a guerrilla war which forced the British to the negotiating table.

A shameful and messy compromise was reached which allowed the partition that Connolly had warned against, and the modern 26 county Irish state was formed. Northern Ireland was also created, dominated by pro-British Protestants.

For years political leaders in southern Ireland vied with each other to claim to be the true inheritors of 1916. Fianna Fail, the major Irish capitalist party, was founded and led by Eamon de Valera, a participant in the rising. He would spend many years as prime minister and later become president.

In 1966, the 50th anniversary of the rising, there were huge state-backed celebrations. But a few years later the rising was being treated almost as an embarrassing incident, best forgotten.

The reason was that the northern state had exploded. A state built on naked sectarianism had been met by huge resistance in the form of a civil rights movement.

Out of the crisis the Provisional IRA emerged and suddenly armed resistance, risings and the like were seen as dangerous things to celebrate.

As the southern leaders began to run for cover, a set of historians began to emerge to give credibility to their cowardice.

These “revisionist” historians began to pour scorn on the rising, to argue, despite all evidence to the contrary, that the home rule approach was the better one.

They claimed this would have resulted in an Irish state without the sectarianism and bloodshed. Furthermore they poured scorn on the “blood sacrifice” of the rising.

They remained strangely quiet about the massive bloodletting and carnage of the First World War, where workers died for no other cause than the power and profits of their bosses.

Therefore it is important that the rising not be forgotten, rewritten, dismissed or hidden from history. Of course there were many weaknesses to the rising. Its chance of military success were almost nil, a number of its leaders idealistic, romantic and religious.

Nevertheless its historical importance, its statement of anti-imperialism, of opposition to the First World war and the flame of resistance it lit, means it is an event worth remembering and celebrating.

Lenin, the leader of the Russian Bolshevik Party, responded to those socialists who wanted to dismiss the rising as nationalist or religious, by arguing about its importance and its potential.

That modern Irish capitalists, politicians and historians want to disregard it tells us that he was essentially right.

James Conolly: ‘For the working class’

“We are out for Ireland for the Irish. But who are the Irish? Not the rack-renting, slum-owning landlord; not the sweating, profit-grinding capitalist; not the sleek and oily lawyer; not the prostitute pressman—the hired liars of the enemy.

“Not these are the Irish upon whom the future depends. Not these, but the Irish working class, the only secure foundation upon which a free nation can be reared.

“Ireland seeks freedom. Labour seeks that an Ireland free should be the sole mistress of her own destiny, supreme owner of all material things within and upon her soil.

For more from James Connolly, visit the Marxists Internet Archive 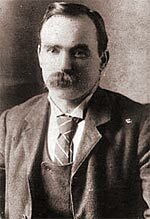