Is alcohol the demon drink?

This article is over 17 years, 4 months old
As the newspapers’ outcry over ‘binge drinking’ grows, Keith Flett takes a look at the history of alcohol under capitalism
Downloading PDF. Please wait...
Saturday 05 February 2005

THE FOLK singers Alex Glasgow and Henry Livings’ song, As Soon as this Pub Closes, the Revolution Starts, accurately summed up the attitude of one section of the left to drink. It was something to be enjoyed over bar-room chats about socialism, but often the enjoyment led to a serious incapacity to do anything practical as a result of the discussions.

The first images that come to mind of drink in British society are the mid-18th century drawings of Hogarth, depicting a degenerate labour force drunk on cheap gin. Behind them stood the reality of a society in transition from agricultural to industrial production. Hours were long, conditions harsh and housing poor. Drink provided the only consolation, and the beer house or pub the only place where light and warmth could be obtained.

The working class and radical movement suffered serious repression after the 1819 massacre of protesters demanding the vote at Peterloo in Manchester. Working class discussion and political activity was driven into the pub, one place where the government found it difficult to keep complete control.

The pub was often the meeting place of early trade societies and trade unions. While there were radicals who liked their drink, the broad radical and dissenting tradition frowned on drink and emphasised sobriety, rational thought and behaviour.

With the rise of the Chartist movement for democracy in the 1830s, the tradition of radical meetings and dinners in pubs with large amounts of alcohol began to decline. Chartism was a genuine mass movement comprising men, women and children. Many meetings were too big for pubs. Social occasions tended to be alcohol-free in halls.

There were limits to how far radicals embraced sobriety. The leader of late Chartism after 1848, Ernest Jones, faced with the increasing influence of anti-drink activists in the movement, complained that the Charter would not be found at the bottom of a glass of water.

It was not so much the issue that annoyed Jones, but the insistence that it was the issue above all others.

From the mid-Victorian era temperance campaigners began to exert a serious influence. They were backed by organised religion — often based in working class communities.

They attracted numbers of labour and socialist activists. While the Tory Party was firmly the party of the big brewers, the Liberal Party and those to the left of it tended to be either anti-drink or at least concerned about its consequences. In the period from the 1850s other changes were under way as well. Governments were keen to ensure a sober and fit workforce as industrial capitalism gained a decisive hold. The restrictions on drinking establishments and licensing hours date from this period.

Capitalism is nothing if not contradictory. The very same period saw the beginning of serious commercial exploitation of the drink and pub trade with the development of some pubs into music halls. With the birth of left parties, such as the Social Democratic Federation (SDF) in the 1880s and then the Independent Labour Party, the issue of drink and the labour movement became sharply focused.

The union leader Ben Tillett complained of Bradford workers, “Drink killed their ambition and their self-respect.” People like Tom Mann and Keir Hardie were active temperance campaigners before they got involved in the labour movement. This was only one side of the debate though. The artist and socialist William Morris said, “If I were to work ten hours a day at work despised and hated I should spend my leisure, I hope, in political agitation, but I fear in drinking.”

The argument of the left against temperance campaigners was that if you wanted to curb drinking you needed to improve living standards. Individual abstinence did not provide a collective solution to what was a general problem in society.

Concern that munitions workers in particular should be sober led to cutbacks in pub hours that remained in force until the 1990s. The alcohol content of beer was also reduced, again a largely permanent measure.

By the beginning of the 1960s a rapid process of concentration of the brewing industry was under way internationally.

While numbers of regional brewers remained, the major brewers dominated the market. Today the concentration is even greater, with a handful of multinational companies, such as Interbrew, dominant.

The brewers moved to get rid of the hand-pumped real ale that had been the mainstay of British pubs since the 19th century and replace it with fizzy keg beers and lagers.

Produced in mega-breweries, they usually cost more to buy and made more profit than the products they replaced. But the multinationals did not have it all their own way. The Campaign For Real Ale was formed in the 1970s. It sought to keep decent beer and pubs and stop the march of the mega-brewers. The 1990s saw the rise of the giant pub companies, and the kind of mega-pub that can be seen on high streets today that is often associated with the phenomena of “binge drinking”.

There are two sides to this debate. Capitalism has always fretted about workers being too drunk to work.

Drink remains an issue for the left and the labour movement. It has never been a universal working class culture and that must be respected. In addition, drink and responsibility in the movement do not go well together.

Brian Harrison has noted in the classic book Drink and the Victorians, “As late as the 1950s, while beer-drinking was widespread among the rank and file in Yorkshire miners’ unions, a union official who drank more than moderately was unlikely to retain his post.”

The last word must go to Victor Grayson who was briefly the revolutionary socialist MP for Colne Valley, Lancashire. Moving the adjournment of a licensing debate in the House of Commons in 1908 he raised instead the question of the unemployed. He said, “There are thousands of people dying in the streets while you are trifling with this bill.” 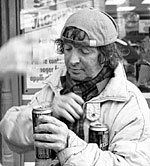 Pressure of society drives many people to find release in drinking