Is it only workers who can lead revolutions?

This article is over 12 years, 4 months old
In the final part of our series Esme Choonara looks at a period when workers did not lead and other groups followed their own agenda
Downloading PDF. Please wait...
Tuesday 22 September 2009

Marxism is not a rigid set of rules into which facts must be squeezed to fit­ – it is a tool for understanding and changing the world. Reality has always thrown up surprises and new challenges.

This is what happened with the theory of permanent revolution in the years after the Second World War.

Leon Trotsky had drawn on his experience of the Russian revolutions of 1905 and 1917 to argue that workers were now the only truly revolutionary class.

Only the working class, he argued, had the interest and collective ability to lead a successful fight for democratic changes and sweep away the old order.

In doing so they would come up against the limits of capitalism and find themselves fighting for a “permanent” – ongoing – revolution for international socialism.

But this wasn’t quite how things happened. Instead there were a series of revolutions and national liberation struggles from the 1940s onwards that did dispose of the old order but where workers played at most a marginal role.

So when Mao Zedong led a successful revolution in China in 1949, it was based on peasants in the countryside. And despite Mao’s forces carrying the label of Communist, this was not a socialist revolution that abolished class and exploitation.

Again in Cuba in 1959 the revolution led by Fidel Castro and Che Guevara largely bypassed the working class.

Workers may have supported the revolution – but they certainly didn’t play any significant role.

Instead the revolution was led by a small band of guerrillas, mostly from a middle class background.

In the decades after the Second World War a series of national liberation struggles was led by intellectuals, students, lawyers and the like.

So what happened – was Trotsky’s theory wrong?

Tony Cliff, the founder of the Socialist Workers Party, argued that much of Trotsky’s theory was still correct.

The capitalist class as a whole was certainly too scared of real change to lead a fight.

The workers were still the only class that could bring socialism.

But the attitude of revolutionaries had changed.

The leaders saw themselves as Marxist and had the determination to fight for independence in a way the capitalist class lacked. But, they looked to a Stalinist tradition that had distorted the workers’ internationalism of Lenin and Trotsky into a top down method of national development.

Decades later the influence of Stalin has lessened, but the key elements of Marx and Trotsky’s theory remain the same – the importance of workers fighting to develop as an independent political force able to give leadership to revolutionary struggle.

This remains crucial today because workers are the one group who have the power to bring about socialism – and so abolish class altogether.

For workers, any change has to be collective. If a group of peasants takes over some land they can divide it among themselves.

But if a group of workers take over their factory they still have to work there together. You can’t just take your bit of machinery and work on your own. So workers’ power – the basis of socialism – is based on collective ownership.

The consequence for the left is clear. In any part of the world, workers should be at the centre of the fight for change.

This is true in the Global South as well as in more developed countries.

Workers in struggle can pull behind them the struggles of small traders, peasants and oppressed groups. They can give economic and political weight to other struggles.

That is one side of “permanent revolution” today. The other side is internationalism. Capitalism is a global system and the development of any country or struggle has to be seen in a world context.

So the liberation of the Palestinians, to take just one example, will depend on the struggle of workers across the Middle East.

And for any revolution to survive it would have to spread across the globe to become “permanent” .

There are millions of workers across the world today who all share an interest in getting rid of the system that impoverishes and exploits them.

But just because workers have an interest in getting rid of capitalism, it doesn’t mean they automatically think that radical change is possible – or even desirable.

There is always an argument about what to do and that comes down to questions of politics, argument and struggle – and of organisation. 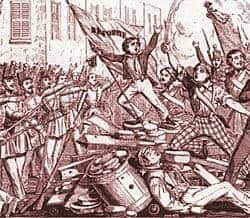 The working class is a force for change