Is manufacturing industry finished in Britain?

This article is over 12 years, 8 months old
Every day seems to bring yet another announcement of job cuts. This is seen as having a terrible effect on the strength of the working class in Britain.
By Simon Basketter
Downloading PDF. Please wait...
Tuesday 12 May 2009

Every day seems to bring yet another announcement of job cuts. This is seen as having a terrible effect on the strength of the working class in Britain.

Since the 1970s about two thirds of jobs have gone from manufacturing. In 2007, Britain made 3.8 percent of the world’s industrial goods, compared with about a third in 1850 when it was the dominant manufacturing country.

Arguments about the end of the working class are nothing new. They have regularly been resurrected over the past 50 years. Some people have even argued that car workers were all becoming middle class.

The “common sense” argument is that the traditional working class in Britain is being replaced by a low paid, unorganised, part-time workforce based in the service sector. The reality is more complex.

The recent swathe of job cuts reinforces the point about the decline.

It is certainly the case that the bosses are attempting to make workers pay the price for the crisis. This is not just with short-term working and layoffs, but also in pay freezes.

The number of companies freezing pay rose to nearly 45 percent.

These figures hide two things. One is that a number of pay deals are tied to the RPI measure of inflation – which is plummeting, unlike the actual cost of living, which is still rising.

The second is that a number of firms have had higher rises.

Manufacturing workers remain a large and powerful section of the working class. One out of ten of the British workforce is officially employed in the manufacturing sector.

These workers often work in large and well-organised workplaces, such as engineering, car manufacturing and food production.

Although their numbers have fallen (as has the level of union density) employed workers have become more productive and because of that more powerful.

Take the British car industry. Over the last 30 years there has been a huge fall in the numbers of workers employed in the industry, but productivity has never been higher.

Polycell, the DIY products manufacturer, has seen its workforce’s productivity rise by nearly 300 percent in the last 25 years. This is despite the fact that the workforce has halved over the same period.

There are a number of arguments about the nature of the working class that are worth exploring in this debate.

The numbers of workers involved in manufacturing declined throughout the 20th century. In Britain today white collar and service sector workers are the majority of the workforce.

The reason for this is that the more productive industry becomes, the more jobs are created to service it.

So the number of office workers, carers or educators, catering workers who ensure other workers are fed, or transport workers who take commuters to work, grows as a proportion of the total workforce.

The vast majority of service sector jobs contribute to the production of wealth in society. And most of the sectors are unionised.

In many cases there is no fundamental difference between manufacturing jobs and service jobs.

Repairing a car exhaust is defined as services, while putting on a new exhaust in a factory is manufacturing.

Another confusion in the manufacturing/service sector figures comes from the effect of outsourcing.

If all this were “added back”, along with associated work such as design and development, it would add at least several percentage points to manufacturers’ output – currently around 13 percent – as a share of British production.

All of this matters because as the recession deepens the argument grows about what you can do about job cuts.

The union leaders and the MPs have a stock answer. The MPs point to the futility of fighting on jobs because of the globalisation and the recession.

Union leaders reinforce this message when they talk up how easy it is for multinational companies to up sticks whenever they feel like it.

Unquestionably, the underlying problem in the world car market is overcapacity. However, the way this crisis unravels is not preordained.

The determined and heroic fight of the Visteon workers shows that the multinationals can be beaten.

Over the last few years the Tories and New Labour have even argued that the decline of manufacturing was a good thing, as it would be replaced with the financial services sector. That argument has been somewhat weakened as the banking system imploded.

Further, the danger of relying on low-tech, low wage jobs has its costs for the bosses and the economy. It creates a society where the level of education and skills are low and therefore less productive.

Some sections of the capitalist class who need skilled workers worry about this problem. Others couldn’t give a damn if they can continue to exploit workers and make a profit.

They also see the decline of manufacturing industry as often weakening organised workers.

What they miss is that the collective strength of the working class in manufacturing and the service sector is strong enough to stand up and fight.

The question is whether the union leaders are prepared to encourage that fight or whether they wish to simply mourn the end of manufacturing they claim they want to prevent. 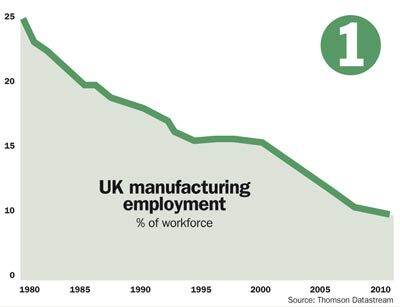