Jamaica – a history of racism and revolt

Britain’s rulers have always treated the lives of black people from the Caribbean with complete disregard.

In the 1600s British and other European colonists began transporting African slaves to the Caribbean in huge numbers.

Now, in 2019, the British government arranges mass deportations to send people it has branded undesirable to Jamaica.

Connecting the two are centuries of racism, imperialism, slavery—and revolt.

The countries of the Caribbean today are still impoverished by imperialism and the legacies of their colonial past.

The people who live and migrate from there are still oppressed by the racism that has its roots in slavery.

Yet those countries also owe their existence to heroic revolts that constantly challenged European colonialism and racism—gradually winning freedom from slavery, then independence from empire.

And at the beginning of it all is the Atlantic slave trade.

European colonists began kidnapping and transporting Africans to the Caribbean in vast numbers around the middle of the 17th century.

This enormous enforced movement of people—as many as 15 million—wrecked the African continent and transformed the population of the Caribbean.

But for the colonists it was simply the best solution to a very modern capitalist problem—how to produce as much as possible as fast and as cheaply as possible.

The sugar industry based in the Caribbean colonies was booming and the old workforce of European workers who were forced to work there wasn’t enough. So, starting in Barbados, the English sugar planters began importing a giant workforce of slaves.

That this was their answer makes the cold and horrifying logic of capitalism all too clear.

As Robin Blackburn, a historian of the Atlantic slave trade, wrote, “The slave-owners discovered the advantages of what economists today call ‘human capital’.”

From around 1650 slaves made up the bulk of the workforce in Barbados, and in Jamaica from the 1670s.

Sugar planters found they could work slave gangs longer and harder under the brute force of the whip than they could the contracted European workers.

In fact the work was so brutal that slaves didn’t often live more than a few years after they were brought over from Africa. The average life expectancy for a slave after the journey from Africa was about seven to ten years.

So tens of thousands of people were captured into slavery and sold to Caribbean traders every year just to stop the slave workforce dying out.

This mass trafficking of humans became the horrific heart of a triangle of trade. It took sugar from the Caribbean to England, weapons from England to Africa—and people from Africa to the Caribbean. They were reduced to commodities and treated as such.

Sometimes ship’s captains would throw entire shiploads of slaves overboard, just to claim the compensation on their “property”.

For a voyage that could last some nine or ten months, the “standard space per slave” in the hold of a slave ship was five foot long, 11 inches wide and 23 inches high.

Locked in such cramped and dark conditions below deck, slaves’ flesh could be worn to the bone by rubbing against the motion of the ship.

The floor of a slave hold could become so covered in blood, mucus and muck that a ship’s doctor testified for the anti-slavery abolition movement “that it resembled a slaughter house”.

Slave traders needed a racist ideology to justify this. They developed a whole pseudoscience to explain why Africans could be regarded as less than human.

They also needed a system of violence to keep it all running—and came up with some of the most appalling acts of brutality.

The risk of slave rebellion was built into the whole setup. It was constant and at its height threatened to undermine the entire system of slavery.

Slave owners had to deal not just with minor acts of disobedience and skirmishes, but also plots of rebellion, strikes and uprisings.

They were painfully aware that they were vastly outnumbered by their slaves, and tried to keep them down with acts of violence to warn slaves off from rebelling.

Lashings were part of daily life on the plantations. So were amputations, mutilation and cropping of fingers and toes.

Slaves would have their flesh whipped off them and then have salt, pepper, vinegar or gunpowder rubbed into their wounds.

Women faced the additional threat of rape and sexual violence.

And many slave owners had their own favourite, personalised methods of punishment. Thomas Thistlewood, an overseer in Jamaica, enjoyed forcing slaves to defecate in each other’s mouths before gagging them.

More serious punishments included execution by burning or on the breaking wheel, which involved the slow crushing of bones.

Others included being gibbetted—hung in a cage and left to die.

“Tacky’s revolt” in Jamaica in 1760 was one of the largest uprisings, involving as many as 30,000 slaves. It was a serious challenge to the rule of the slave owners.

Colonial ruler Edward Long said its purpose was “the entire extinction of the white inhabitants and the partition of the island into small principalities in the African mode”.

Colonial forces killed 400 rebels, deported 500 and executed or tortured to death another 100 in order to make “terrible examples of some of the most guilty of the captives,” in the words of slaver Bryan Edwards.

For all that, slaves rebelled time and again.

Historian Orlando Patterson said that in 180 years of Jamaica’s history as a slave colony, “hardly a decade went by without a serious, large scale revolt threatening the entire system.

“Between these larger efforts were numerous minor skirmishes, endless plots, individual acts of violence against the master and other forms of resistance,” he said.

Two of those revolts delivered mortal blows to the entire slave industry in the Caribbean.

The first was the Haitian Revolution, a revolt against the three great colonial powers in the Caribbean—Britain, France and Spain.

It began with a mass slave revolt on the island of Hispaniola in 1791 that quickly took over a vast part of the French territory of St Domingue.

Slaves and free black people formed themselves into an army that forced the French government into abolishing slavery. Later they formed the first free black republic, Haiti.

Along the way they inflicted humiliation on all three colonial powers.

This included one of Britain’s greatest military defeats, when 80,000 British soldiers died in a failed attempt to capture St Domingue.

The second big revolt was the great Jamaican rebellion of 1831.

It was organised across nearly 100 plantations by an underground slave leadership.

Beginning as a strike in which plantations were burned, it quickly became an armed rebellion involving some 60,000 slaves across some 750 miles of Jamaica.

This was also put down brutally. But slavery was abolished in British Caribbean colonies two years later.

Historian John Newsinger said it was this great Jamaican revolt that had “finally made it clear that slavery was no longer a viable system of exploitation in the British Caribbean”.

With slavery ended, a series of fresh revolts gradually weakened Britain’s grip on the Caribbean altogether.

In 1865 a crowd of mostly black workers marched in the town of Morant Bay behind a red flag and then burned the court.

British colonial rulers put it down with the same force they had used to crush the slave rebellions just decades earlier.

Jamaicans finally won their independence in 1962, with resistance led by strikes in the sugar plants and on the docks.

Today Jamaica is still impoverished by the legacy of colonial rule and slavery.

And a system of International Monetary Fund “loans” keeps it indebted. But the history of Jamaica reminds us that, even as people of Caribbean descent are still treated with brutality by the British state, they have always fought back. 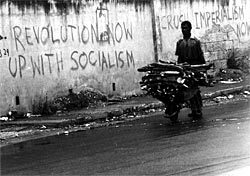 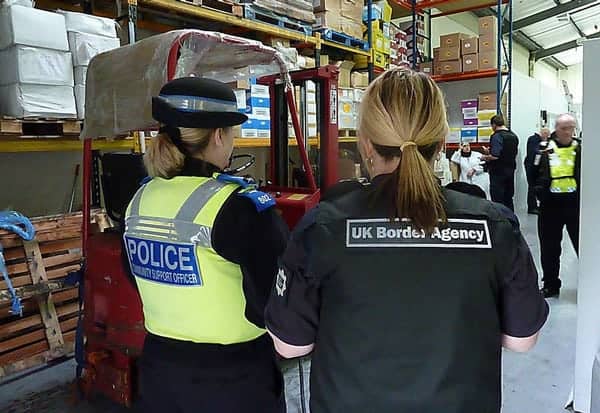