This article is over 14 years, 11 months old
Understanding the economic role of Jews in the Middle Ages is crucial if we are to understand the history of Jewish persecution, writes Beccy Reese
Downloading PDF. Please wait...
Saturday 03 February 2007 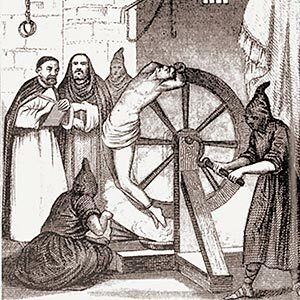 Anyone who has ever argued in defence of Palestinians will have come across supporters of Israel who claim that any criticism of Israel – or of the Zionist ideology that underpins that state – amounts to antisemitism. They say that such criticisms are a masked form of anti-Jewish racism.

This assertion is frequently backed up with an insistence that antisemitism is as old as history, and that the Diaspora (the dispersal of Jews by the Roman Empire in AD70) led to an unrelenting dark age for Jews marked by continuous persecution.

Neither of these views withstands careful scrutiny. Yet it certainly is true that Jews down the ages have suffered from oppression, hatred and prejudice. Is there some truth, then, in this picture of unrelenting persecution of Jews put forward by Zionists?

In other words, the reason why the existence of Jewish culture has continued throughout the 2,000 years since the Diaspora can be found in the economic and social role Jewish people carried out during that time.

One man who developed the Marxist understanding of the maintenance of the Jewish identity was Abram Leon. Born in Poland in 1918, Abram Leon emigrated to Belgium with his family in the late 1920s. The Nazis occupied Belgium in 1940, and he led an underground Trotskyist resistance movement against them.

At the age of 24 he wrote an exceptional analysis of the history and nature of Jewish oppression, The Jewish Question: A Marxist Interpretation. Leon was arrested in 1944. He was put to death by the Nazis in the gas chambers of Auschwitz concentration camp.

In his wide ranging study Leon argued that the Jews, as a social group, were shaped by their economic role during feudalism, first in commerce then in money lending. These economic activities defined a common Jewish ethnic identity, based on a shared religious belief and language. Jews developed into a distinct class, what Leon characterised as a ‘people-class’.

Jewish people were merchants during a time when wealth came primarily from the land and the vast majority of people lived at a subsistence level through agriculture. As merchants they earned a living by trading in salt, spices, musk, camphor, cinnamon, fur and slaves – luxuries that had to be traded across Europe and the east.

This isn’t to say that Jewish people never engaged directly in agriculture. But when they did so, they tended to melt into the population and lost their cultural distinctiveness. Conversely, where they remained engaged in trade, they largely maintained their distinct Jewish culture.

Moreover, contrary to the claims of many Zionists, the Diaspora did not simply start with Romans destroying the Temple of Jerusalem in AD70. By that point there was already a thriving Jewish community based outside what is now called Israel.

Documents recently discovered in Egypt show that there were established Jewish communities in Cairo some 500 years before the fall of Jerusalem.

Archaeological excavations in Palestine prove that Jews were one of many religious communities that lived there side by side. Some Israeli academics now question whether there ever was a ‘kingdom of Israel’ as claimed by modern Zionism.

Nevertheless, the fate of the Jews was interwoven with that of the Roman Empire – and as that empire collapsed they found themselves working as merchants and traders, primarily in the Mediterranean. The dispersal of the Jews was in fact the key to their survival as a distinct cultural group.

During this period the words ‘merchant’ and ‘Jew’ were used to mean the same thing. Leon found that many people who turned to trade converted to Judaism. With the development of trade, Jewish merchants established themselves across the Mediterranean, settling in the city states in what is now called the Arab world.

Jewish merchants developed an extraordinary network of trade, reaching from India to Spain. And with the rise of Islam, Jews became established as an important part of the link between the Muslim empire and Christian Europe.

The Jewish merchant of the medieval era had access to funds that very few other classes in society had. So when a king had to assemble an army at speed and couldn’t raise enough money from taxes, he went to the man with cash.

When a peasant’s harvest failed or his tools broke, he also looked to the Jewish merchant to borrow money. Trade began to give way to money lending.

But as the feudal system developed across Europe, so did hostility towards Jews. The ruling lords had to afford the Jews some protection, given that they performed a useful function for them. But they hated to see a class making money out of trade and exchange while they made a living by exploiting labourers on the land.

Christopher Tyerman’s book God’s War traces how the first serious anti-Jewish persecution arose with the rise of the Crusades. The Jews were both protected and betrayed by the rising feudal class during the 11th and 12th century. It was during this period that Pope Urban II issued an edict blaming the Jews for the death of Christ – a ruling that the papacy only overturned in the 1960s.

Roaming armies of Crusaders pillaged their way across Europe, often funding their campaigns against the Muslims with wealth plundered from Jewish merchants.

The fate of the Jews during this era was bound up with that of the Muslim empire, never more so than in Andalusia, the Muslim region of Spain. Christian forces finally defeated the Muslims in Spain in the 15th century.

Their victory was soon followed by the Inquisition – mass persecution of both Jews and Muslims, who were all forced to convert to Christianity and eventually expelled from Spain.

This terror appears at a time when feudalism was giving way to a system based on exchange. The more that money circulated, the less need there was for the Jewish money lender with his reserve treasury.

The Jews of the feudal period were an easy target for mass bitterness, especially once feudalism entered a period of sharp economic crisis marked by famine, wars and uprisings against the ruling classes.

Jews found themselves excluded from agriculture by the church, consigned to a specific role on the margins of society. They lacked the power of the wealthy lords, but were nevertheless often seen by peasants as symbols of the political system under which they suffered.

As these changes took hold in Europe, the Jewish population started to move eastwards, away from the emerging capitalist economies and towards places where feudalism still held sway. Some persecuted Jews found sanctuary in Muslim lands, while others moved away from western Europe into Poland.

A system arose whereby Polish nobles leased their estates to be managed by Jews, who ran the estates, mills and distilleries. By the beginning of the 19th century more than half of the world’s Jewish population lived in Poland and Lithuania.

The Jews developed a large degree of self-governance during this period, but also incurred resentment and hatred from the serfs who worked on the estates. This system didn’t hold as revolts – including attacks on the Jewish managers – increased. The stagnation of Polish feudalism marked the end of Jewish prosperity there.

Away from eastern Europe, Jews amassed in cities, either trying to hold on to their merchant role under capitalism’s rapid expansion, or as a new immigrant population of workers. As revolutions spread across Europe throughout the 19th century, feudal prohibitions were lifted and Jews began to integrate into the general population.

In particular, the late 1890s saw the rise of antisemitism across Europe. Ancient prejudices against Jews were repackaged as a modern racist ideology, complete with bogus science about the ‘Jewish race’ and paranoid conspiracy theories.

The economic crises of the late 1920s led to massive competition among small businesses and artisans. In this environment the image of the Jewish competitor who had centuries of practice in surviving ‘hard times’ became a hate figure.

The anger that many directed towards big business could be diverted against ‘Jewish capitalism’ – a fact that the Nazis in Germany ruthlessly exploited by promoting the notion of a ‘Judeo-Bolshevik plot’ that allegedly orchestrated both high finance and working class militancy.

But antisemitism – as with all forms of racism – was a means to an end. It was used by the right to the defeat the working class movement and any democratic opposition to the ruling order.

Today we have to be loudest opponents of racism in all its forms. We know that racism splits our class and weakens our fight for freedom from oppression and exploitation.

Marxist thinkers like Abram Leon who analysed the history of Jewish persecution provide a method by which we can understand the development of antisemitism and racism – and understand how to fight it.

Abram Leon’s The Jewish Question is available online at www.marxists.de/religion/leon/
Christopher Tyerman’s God’s War: A New History Of The Crusades is published by Allen Lane. You can order a copy from Bookmarks, the socialist bookshop – phone 020 7637 1848 or go to www.bookmarks.uk.com
Topics Antisemitism, Palestine

Israel mourns the fall of dictators like Egypt's Mubarak