This article is over 6 years, 5 months old
Privatisation is underway at the National Gallery. Its workers are on strike to stop fat cat bosses defacing their conditions, their union and a valuable public service. And they need your help, reports Nick Clark
Downloading PDF. Please wait...
Tuesday 18 August 2015

The fight at the National Gallery has entered a crucial stage—and the need for solidarity with the striking workers is greater than ever.

Bosses signed a deal on Tuesday  of last week that will outsource some 300 gallery staff to private security firm Securitas.

Workers walked out on an indefinite strike on the same day.

The PCS union members had been battling to stop the selloff from going through since January.

They’ve now gone all-out to stop the onslaught on their working conditions before Securitas takes over in November.

Securitas has said it won’t change the workers’ terms and conditions or make anyone redundant.

It said the workers will “remain a valued part of the National Gallery family”. It is all smoke and mirrors.

Bosses like to outsource to companies such as Securitas because they specialise in providing cheap labour on poor conditions.

Securitas admits as much itself on its website. It explains that “private security companies are able to pay their staff at a lower rate” than public sector workers.

The strikers only speak to the press under conditions of anonymity, or if their names are changed.

But if gallery bosses ever feel like getting rid of someone now, Securitas will do their dirty work.

One striker, whose name we have changed to Adam, told Socialist Worker, “A lot of it is the gallery doing away with the responsibility. If they sacked one of us that would be the gallery’s problem.

“But if they farm it off to Securitas, then it’s no longer the gallery’s problem. All they need to say is, we don’t want that person working here anymore. Then it’s Securitas’ problem to deal with.”

Securitas may never break its promise to keep all the current staff on the same terms and conditions.

But there are sneakier ways to drive down standards.

One of the strikers’ key demands is that all new workers must be employed on the same terms and conditions as current staff.

Another striker, whose name we have changed to Chris, explained, “You’ve got a core of existing staff whose terms and conditions will be protected.

“But say if someone were to join the gallery, what kind of Securitas contract are they going to be on?

“Every existing person will eventually be replaced by a new person on not so good terms.

“They’re going to say don’t worry about your terms and conditions. But actually there’s stuff in motion that is going to change the character of the workforce.”

And Securitas has ways it can hurry this process along.

There’s nothing to stop the private security firm from transferring some of their workers to other Securitas-run sites, such as a supermarket or a carpark.

Bosses are using other methods to push workers out, such as taking away the chairs the gallery assistants need to sit on.

“So things such as chairs are quite an attritional way of getting staff to say, ‘I’ll knock it on the head. I’m going to take early retirement’.”

The aim is to turn the gallery from a public service to a profit-driven business.

“It’s about the gallery becoming more of a sort of corporate machine-type place,” said Adam.

“I think with the way it’s going, maybe the emphasis will go from being about the art to being purely about security.

“We’re not really security guards, and we’ve got to get what is in effect a bouncer’s license. It’s not a public service anymore.”

This is partly why the strikers’ battle has struck a chord with a wide range of people. Many of the gallery’s visitors have stopped at the picket line to offer support and donate to the strike fund.

Regular visitor Justin Schlicht told Socialist Worker, “Most of the people I know have heard about the strike and are against the privatisation.

“That’s what’s so appalling about the possibility of privatisation.”

The attacks on the gallery workers put them at the sharp end of a broader assault on workers and trade unions—particularly in the public sector.

She told Socialist Worker, “We’re fighting the same things—privatisation and outsourcing. It’s about what is public and what belongs to us.”

And Sandy Nicoll from the Unison union at Soas university said, “Throughout the public sector we’re facing outsourcing. That’s why this is an important battle.”

The strike has only grown stronger since the privatisation went through.

The all-out action has seen strikers mount some of their biggest picket lines to date.

Some 70 strikers filled a strike meeting on Tuesday of last week—for some it was their first one.

Speaking on the picket line, Candy told supporters, “We’ve learned going on all-out strike is the way to go.

“We’ve had more support in the last couple of days than we’ve ever had.

“We’re not giving up a fight to protect the service that the gallery provides and all the terms and conditions of the staff.”

And Chris said, “I think there was a feeling that signing the contract would demoralise people.

“But the reaction from staff has been to support the strike even more.

“I just think that people really feel strongly that this is a public asset, and I think they’re disgusted that it has been sold off.

“It’s that principle. Now it’s staring them in the face—they’re just so disgusted by it.” 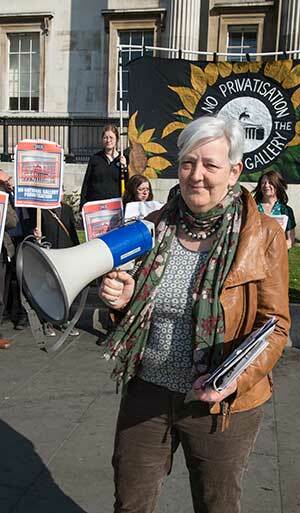 National Gallery bosses want to break the union so they can force through their attacks.

That’s why the fight to get victimised PCS union rep Candy Udwin reinstated is central to the workers’ fight.

Candy was suspended ahead of the first walkout in January on trumped-up charges of “breaching confidentiality”.

Bosses later sacked her in May for gross misconduct.

She had drafted a question for a PCS official that asked about the cost of hiring private security firm CIS. Bosses had brought in the firm to run the gallery’s Sainsbury Wing.

But an interim employment tribunal ruled that it was unreasonable to accuse Candy of gross misconduct.

The judge said that a full tribunal would likely find that Candy had been acting legitimately as a union rep when she drafted the question.

This points to the real reason for getting rid of Candy—she is a proven class fighter.

One of the striking gallery workers told Socialist Worker, “Candy was fired because she was asking questions about the privatisation.

“It’s an attempt to break the union. Candy was the person that they took out, but it could have been any of us.”

Candy’s appeal hearing concluded on the same day that the privatisation deal went through. The result had not been announced as Socialist Worker went to press.

It will be a disgrace if the appeal does not result in Candy’s reinstatement.

But the best way to get Candy’s job back is to make sure the strikers win.

Strikers are going all-out—now let’s get behind them

Trade unionists and campaigners are rallying to help the strikers. Union delegations from London’s universities joined the picket line with their banners on Thursday of last week.

It followed a visit from members of actors’ union Equity the day before, who helped mount an afternoon picket.

And last Friday Disabled People Against Cuts (Dpac) and Department for Work and Pensions workers visited the workers. So did Green Party members and Black Activists Rising against Cuts (Barac).

The strikers are calling on people to “pick a day, pick a painting” to organise solidarity.

This means choosing a day to organise support for the strike throughout a trade union, campaign or sector—and choosing a painting in the gallery to help build publicity.

So Barac has chosen Miss Lala at the Cirque Fernando by Edgar Degas to publicise its support because it shows a black trapeze artist rising through the air.

And Dpac activists have chosen The Thames below Westminster by Claude Monet.It’s a painting of Westminster Bridge—the site of one of their direct action protests.

If you live outside London, invite strikers to visit your town or city. PCS member John Williamson invited a striker to visit York to collect for the strike fund and join a People’s Assembly protest at York Art Gallery against entrance fees.

John explained that linking the gallery strikers up with workers and other campaigners is one of the most effective ways of organising solidarity.

He told Socialist Worker, “It’s a two-way street. There’s massive benefits for us when a striker comes to speak.

“But I like to think it’s also really helpful for them. It’s been quite inspirational for people struggling or striking in their own workplaces.

“Think about how local trade unionists can get a boost from it. And think about it giving confidence to the strikers themselves.”

If you can’t organise a visit, organise a collection—the strikers need to raise as much as £1,000 a day to keep going.

And if you can’t collect, send a card round work or send a message from local activists.

Everyone who supports the strikers can do something to help them win. 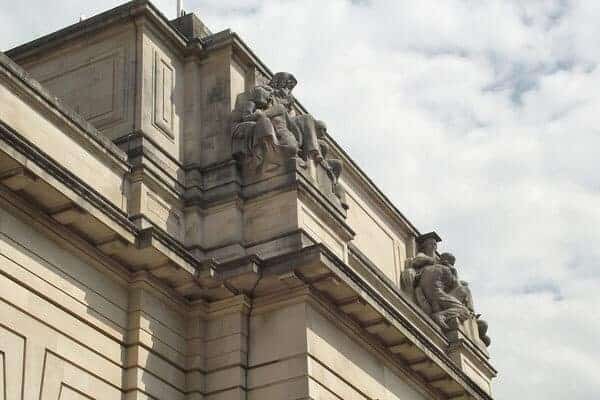 Museum workers in Wales hit back at pay attacks 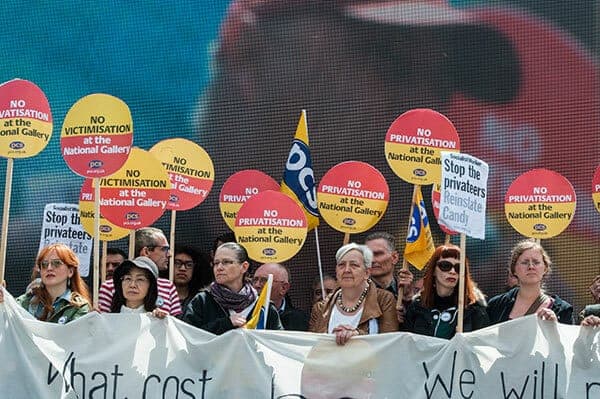 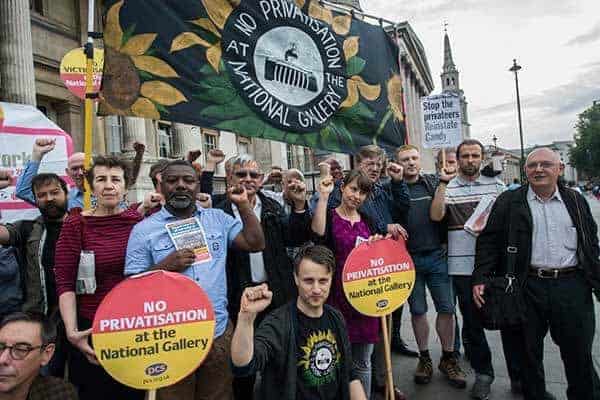 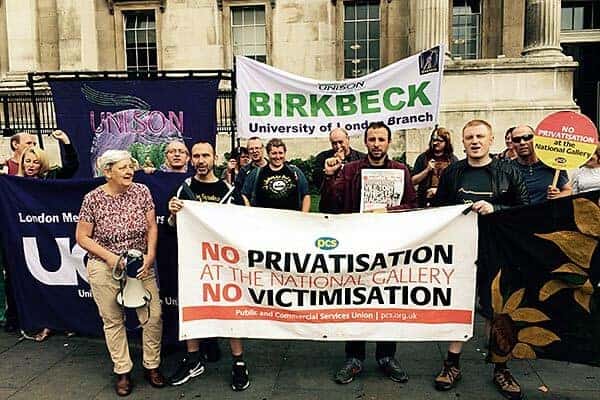