This article is over 15 years, 11 months old
The Ligue Communiste Révolutionnaire (LCR) is the most important organisation of the revolutionary left in France. Last weekend it held its 16th congress. Alex Callinicos reports
Downloading PDF. Please wait...
Saturday 28 January 2006

Since the public sector strikes of November-December 1995 France has been in the vanguard of the resistance to neo-liberal policies in Europe. The French referendum on the European constitution on 29 May 2005 marked a decisive defeat for this attempt by the ruling classes of the continent to hard-wire free market policies into European society.

It was followed by the riots that swept through France’s working class suburbs in November revealing the depths of anger and alienation felt by huge numbers of young people.

This situation faces the radical left in France with a challenge. The no campaign against the constitution gave birth to a network of local committees bringing together tens of thousands of activists. These committees have carried on as the “collectives of 29 May”.

The key question now is whether this movement can mount an effective political challenge to the right wing government of president Jacques Chirac.

The organised left played a key role in the no campaign. The Socialist Party (SP), the French equivalent of the Labour Party, split over the European constitution. A majority of SP supporters defied the party leadership and voted no.

Dissident SP leaders worked alongside the Communist Party (CP) and the LCR in the no campaign. Could these forces also come together to run a single candidate in the 2007 presidential elections?

The CP remains the key force in the French organised working class. Between 1997 and 2001 it served in the “plural left” coalition government dominated by the SP, which implemented neo-liberal policies almost identical to those of its right wing predecessors. This variant of Blairism is called social liberalism in France.

The CP, already in decline, saw its support drain away leftwards. Its leader Robert Hue was beaten in the 2002 presidential elections by two Trotskyists, Arlette Laguiller of Lutte Ouvrière and Olivier Besancenot of the LCR.

Hue’s successor, Marie George Buffet, moved the CP leftwards. But the party remains caught between the challenge from the far left and the need for alliances with the SP to hang onto its parliamentary seats and the local councils it still controls.

This situation gives the LCR a strategic role. It has only 3,000 members compared to the CP’s 50,000-60,000. But its activists are well rooted and the membership has doubled since the 2002 elections.

Besancenot, the Ligue’s spokesperson, is one of the most popular figures in France. The opinion polls currently predict he would win 8 percent of the vote in the next presidential election, compared to only 4.5 percent for Buffet. The CP recently approached the LCR to set up a joint working party.

The Ligue’s strong position is reflected in the fact that last Friday’s edition of Libération, the French equivalent of the Guardian, devoted its first three pages to the congress. Unfortunately, the LCR is deeply divided over what to do.

For a number of years the LCR’s leadership has been split between a majority whose most prominent figures include François Sabado, Olivier Besancenot, and Alain Krivine, and a minority headed by Christian Piquet, the editor of the LCR’s weekly paper Rouge.

The majority, known as Platform 1, has rightly sought to maintain the Ligue’s identity as a revolutionary Marxist organisation.

The minority, Platform 3, are much less committed to continuing this tradition. They see the LCR as a catalyst in a realignment of the left involving elements of both the CP and SP, and some at least don’t rule out LCR participation in another “plural left” government.

Unfortunately Platform 1 has allowed itself to be trapped into arguing against the idea that the referendum campaign has created the conditions for launching a new broad party of the radical left – comparable to the Respect coalition, the Linkspartei in Germany or the Left Bloc in Portugal.

Besancenot told delegates, “The collectives of 29 May couldn’t respond to the riots because they were divided over whether they were legitimate revolts or mere delinquency. The SP is dictating the terms of the discussion. The collectives have committed suicide. We should say that the conditions don’t exist for a unitary candidate.”

Laurent, another of the leaders of Platform 1, argued that the Ligue shouldn’t take 29 May as the key reference point, but 1995, the year of the mass strikes, and 1997, when the plural left channelled mass resistance into social liberal policies.

“There is a division on the left,” Laurent said, “between those who want to manage the system and those who base themselves on struggle.” Although formally correct, this distinction was used to obscure the fact that the no campaign had shown it was possible to win many CP and SP supporters over to more militant – though not yet revolutionary – positions.

Sabado said he was for a unitary candidate standing on an anti-capitalist – to all intents and purposes, a revolutionary – programme. Talking to the CP now would mean putting Besancenot’s candidacy on ice, he argued, when the threat of running him was the only real way of putting pressure on the CP.

The speakers from Platform 3 were much more open to the possibilities for left realignment. For example, Remy from Marseilles said, “This congress is not about reaffirming the LCR’s revolutionary identity but about offering a concrete initiative to the millions who voted no.”

The sectarian logic of the arguments put by Platform 1 was brought out by a speaker from one of the smaller factions, Platform 2, who argued that a programme opposing neo-liberalism was necessarily pro-capitalist and reformist.

This logic was challenged by Danielle Obono. She argued that the distinction between anti-capitalism and opposition to neo-liberalism wasn’t so stark. The situation made it possible for large numbers of people to move from one to the other.

Danielle belongs to Platform 4, a new grouping bringing together established leaders of the LCR, such as Leonce Aguirre and Catherine Samary, with supporters of the current Socialisme par en Bas, which, like the SWP in Britain, belongs to the International Socialist Tendency.

Platform 4 agrees with Platform 3 on the need for the LCR to take the initiative in seeking to create a new political force uniting all those who reject social liberalism. But it is clear that such an initiative doesn’t represent the abandonment of independent Marxist organisation, but is a step towards creating a mass revolutionary party.

Vanina, summing up for Platform 4, stressed the danger of waiting for the right conditions: “Large numbers of people breaking with social liberalism are together in the collectives of 29 May. There is no guarantee of success, but it’s a real pity to start by saying that regroupment is finished.

“A poll after the CP congress showed that 60 percent of activists preferred a unitary candidate to their own leader, Buffet.”

Though a new and relatively small grouping, Platform 4 made a sufficiently big impact in the pre-congress discussion to win 9 percent of the votes at the local conferences that elected delegates. Platform 1 won just under 50 percent, and narrowly won the key congress votes.

The congress ended with an appeal by Besancenot for a unitary candidate for president on an anti-capitalist platform.

A final decision has been postponed till another conference in June. Let’s hope the LCR doesn’t throw away a once in a lifetime chance to remake the French left. 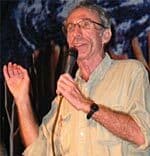 Daniel Bensaïd on the possibilities for the LCR