This article is over 15 years, 3 months old
Tony Woodley, the general secretary of the T&G union, summed up delegates’ frustration with New Labour, but also the limitations of that opposition.
Downloading PDF. Please wait...
Saturday 07 October 2006

Tony Woodley, the general secretary of the T&G union, summed up delegates’ frustration with New Labour, but also the limitations of that opposition.

On the conference platform, he condemned the government over Lebanon for failing to oppose the “massacre of more than 1,000 innocent civilians. We saw a country bombed back 20 years.

“It was our government alone that kept backing that ludicrous Bush strategy. The world was calling for an immediate ceasefire but the inactivity of our government gave the green light to keep on bombing.”

He added that Lebanon was another conflict that had achieved nothing, like Iraq and Afghanistan, and described Iraq as “Vietnam without the trees”.

“We were not welcome and we should be out right now,” he said.

At another fringe meeting he said, “I read a speech by Gordon Brown the other week when he says manufacturing champions are not relevant and let market forces rule OK. Well, bugger him as well, as far as I’m concerned.”

But in response to Tony Blair’s speech he said, “Love him or loathe him, it was a leader’s speech. He reminded us of his legacy and that Britain is a fairer society under Labour, a better place for workers, pensioners and families than under the Tories.”

And the strong likelihood remains that when the chips are down all the main union leaders will back Brown.

If they back him they will be betraying the mood of anger inside the working class. 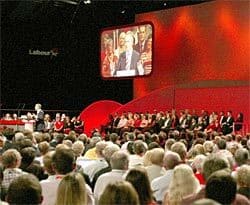 Inside the Labour bubble

Labour conference: Anger and dissent on the floor

John McDonnell’s challenge from the left