Leopold and Mobutu — colonialism and the ‘incorruptible Kodak’

This article is over 16 years, 4 months old
At the beginning of the last century the American writer Mark Twain wrote a satire about Belgium’s King Leopold II, the colonial ruler of the Congo.
By Charlie Kimber
Downloading PDF. Please wait...
Saturday 27 August 2005

At the beginning of the last century the American writer Mark Twain wrote a satire about Belgium’s King Leopold II, the colonial ruler of the Congo.

Twain imagined the king gloating over his money but raging against his enemies, particularly “the incorruptible Kodak, the only witness I have encountered in my long experience that I couldn’t bribe.”

Leopold’s rule saw half of the Congolese population, perhaps as many as 15 million people, massacred or killed through starvation, hard labour and disease. These were some of the first atrocities revealed by the power of photography.

Guy Tillim’s exhibition Leopold and Mobutu shows the undiminished power of the “incorruptible Kodak” when it is in the right hands.

Tillim’s photos draw parallels between the colonial period and the rule of the dictator Joseph Mobutu from 1965 to 1997.

They also point towards the present suffering in the Democratic Republic of Congo and the war which has seen some four million people killed in the last five years.

Tillim’s overtly political message flows from the way he often brings two or three images together in the same picture frame to make connections and linkages.

So for example, he illustrates the continuing burden of exploitation and imperial plunder by putting together a photograph of a statue of a Congolese miner taken at the Central African Museum in Brussels, built on Leopold’s orders, contrasted with an image of contemporary Congolese workers at the gold mines in Bunia. In another case he brings together pictures of people displaced by the recent fighting in Congo with one of another statue at the Central African Museum, titled “La Belgique apportant la civilisation à Congo” (Belgium brings civilisation to the Congo).

Tillim’s portraits of child Mai Mai militia soldiers, wearing leaves as camouflage, appear to be the contemporary reincarnation of the young African troops who were forced into colonial armies in the late 1880s. But some of the exhibition also gives hope. It is exhilarating to see the fallen statues from the colonial period and the destroyed remains of Mobutu’s looted palace.

The pictures recall Shelley’s poem Ozymandias about how those who are powerful at one time and believe their gilded reputation will endure for a thousand years can be toppled and reviled. Today’s heroic statue is tomorrow’s scrap metal.

Leopold plundered the Congo and then Mobutu did the same with the active support of the US, Belgium and France.

He had his own private hairdresser flown in from Paris, several times a month. He loaded up jumbo cargo planes with the most haute of haute couture, gallon vats of perfume, Aubusson tapestries, Murano chandeliers, thousands of bottles of Laurent Perrier champagne and other sundries.

The way other people rent cars, he chartered the Concorde for a little family junket to Disneyland.

And now his palace is overgrown and smashed. Guy Tillim, born in 1962 in South Africa, is producing some of the most powerful work about Africa at the moment. 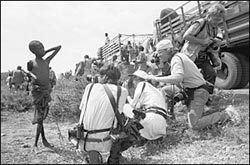 Who decides how we see Africa?