This article is over 13 years, 3 months old
The fact that climate change is threatening the existence of our planet is one of the strongest indictments of the capitalist system.
Downloading PDF. Please wait...
Tuesday 07 October 2008

The fact that climate change is threatening the existence of our planet is one of the strongest indictments of the capitalist system.

The way our society is run is threatening disaster, and the measures that could tackle climate change are not being taken.

Our rulers’ “solutions” don’t contradict the logic of the market.

One such measure, favoured by Gordon Brown is “carbon trading”. This allows the rich to continue polluting the planet as long as they pay for the privilege.

The logic is that everyone has an allocation of carbon that they can emit. A market is created whereby “carbon credits” can be traded.

So richer companies and countries can buy the credits of poorer ones and emit more carbon.

But this can lead to an increase in emissions, as the poor would have not emitted the carbon in the first place.

Carbon offsetting involves people compensating for their emissions by doing things like planting trees. The schemes are also often scams.

Someone may return from holiday and pay a company to plant trees to offset the emissions involved in the plane journeys.

But carbon offsetting is not regulated or bound by any laws – so there is no guarantee that those trees will in fact be planted.

It is another scheme that ironically can lead to more emissions.

Often the “offsetting” measures are things that were planned anyway.

And the focus on individual carbon “footprints” lets the large polluters off the hook.

Our rulers will do anything to stop real action on climate change.

This may seem strange – the destruction of the planet, after all, affects them too.

But we are not all in the same boat when it comes to the impact of climate change.

The poor will suffer much more than the rich, who are able to spend money protecting themselves against the worst effects.

The rich and powerful are out to protect their profits and power.

In 2007 six of the largest ten corporations in the world were oil companies. Three were car companies.

These corporations have serious vested interests in maintaining fossil fuel and car production.

The government’s 2006 Stern report said that climate change “must be regarded as market failure on the greatest scale the world has seen”. The logical conclusion to this is to tackle the free market.

But the report, although critical of the market, did not accept that there could be any way of fighting climate change outside a market framework.

This reflects the dominant neoliberal ideology of society.

Unless that ideology is challenged, the solutions put forward to climate change will continue to be inadequate. 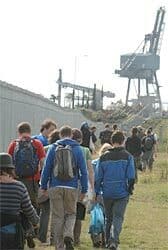 We don't need coal or nuclear power stations to save planet