Losing their grip: the Iraq occupation in crisis

This article is over 17 years, 5 months old
Alexander Cockburn gives a view from the US of the panic sweeping the Bush administration
Downloading PDF. Please wait...
Saturday 22 January 2005

“Any appearance of a permanent occupation of Iraq will both undermine domestic support here in the US and play directly into the hands of those in the Middle East who—however wrongly—suspect us of imperial design.” So spoke James Baker last week in a speech at Rice University in Houston.

There are few heavier hitters in Bush country than Baker—US secretary of state when Bush Snr went to war on Iraq in 1991. There’s plenty of high-level talk of a possible US withdrawal after Iraq’s elections at the end of this month. A retired general is now in Iraq to assess the situation.

Even so, to bet that the US might cut and run from the mess in Iraq is, in an historical perspective, a risky option. The traditional pacing of imperial adventures, even misadventures, does not include many headlong retreats.

The speediest withdrawal was probably the one that followed president Reagan’s decision in February 1984 to pull a US marine force out of Lebanon, after a disastrous 16-month deployment that included the blowing up of 241 US marines in their barracks by a truck bomb.

But by comparison with the huge US deployment in Iraq, the Lebanon operation was minor. The advocates of the Lebanese deployment in Reagan’s time pointed back to president Eisenhower’s successful dispatch of US marines to Lebanon in 1958.

Looking back at the routing of Saddam’s army in 1991, those urging invasion of Iraq in 2002 and 2003 said that history would not only see a repetition of that victory, but also the consummation that Bush Snr would not permit—the eviction of Saddam and rearrangement of Iraq’s internal politics. The consequence of that hubris is already securely lodged in the annals of imperial discomfiture.

After nearly two years, eight US divisions can barely guard their own internal lines of communication or the road to Baghdad airport. There’s talk of organising death squads on the old Salvadoran model run by the CIA, but it’s way too late for that option.

The casualty list swells with each day that passes—over 10,000 dead and maimed US troops. The torture scandals have been as devastating to the US’s international reputation as was the My Lai massacre in Vietnam.

No one expects the situation to improve militarily, and the prospect of civil war in Iraq looms. The war is politically unpopular here, as local newspapers and TV news stations carry weekly news of local boys killed or maimed.

The US army is cracking under the strain, in part because of one of the legacies of the Vietnam experience. Creighton Abrams and other US generals restructured the army to make it heavily dependent on reserves. Among their motives was the idea that presidents would find it harder to commit the forces to extended wars.

That particular chicken has now come home to roost—no less than 40 percent of the US forces now in Iraq are made up of national guard and reserves, most of them bitterly resentful of having been corralled into long tours in Iraq with no release in sight.

Last month the general who heads the army reserves stated bleakly in a memo to his superiors that his units were “rapidly degenerating into a ‘broken’ force”. New recruitment to the reserves and to the army has plummeted, for obvious reasons. The generals want out, before the war destroys the army.

The cost of the war is already huge: $200 billion by the end of this fiscal year is the forecast of Chuck Spinney, a former Pentagon analyst. Politically, there will never be a more opportune time to start a withdrawal.

Bush was re-elected with a solid majority. Unlike Kerry, he is not under pressure to establish his warmongering credentials. Republicans rule both chambers of Congress and the midterm elections are nearly two years into the future.

The political establishment is split. James Baker certainly speaks for the oil industry. And most of corporate America thinks the US has problems far more pressing than Iraq. The libertarian, old conservative wing of the Republican Party has never liked this war.

But the Israel lobby, which pitched the war to Bush and got the US into it, is still deeply committed and retains considerable power both in the government, the Congress and the para-government institutes, centers and thinktanks that throttle Washington like ivy.

The great dread of the Israel lobby back in the early 1970s was that withdrawal from Vietnam might presage withdrawal of support for Israel. Withdrawal from Iraq would be seen by the same lobby as a huge setback, and the Sharon government is no doubt pondering scenarios to ensure withdrawal is postponed.

Bush himself has a huge stake in being able to claim some sort of “success” in Iraq, so it all depends on how the Iraq elections play out. If somehow the White House can claim that Iraq has now been led towards the “democratic” path then decorous retreat is conceivable.

But if the chaos deepens and the resistance makes further strides, if the Shia majority turn on the US, then retreat will be inevitable. The only alternative in that case would be a draft here, and a US force four times its present size.

The war would become the all-consuming theme of Bush’s second term. It would be rational for the US to start withdrawal in a month or two. But we are not dealing with rationality.

Gabriel Kolko, America’s greatest historian of war, put it well, in this reflection on “intelligence” and Vietnam: “The state’s intelligence mechanisms are constrained by a larger structural and ideological environment and by the inherent irrationality of a foreign policy which foredooms any effort to base action on informed insight to a chimera…

“Intelligence’s pretension to being objective is a hoax because those parts of it that do not reconfirm the power structure’s interests and predetermined policies are ignored and discarded… The system, in a word, is irrational. We saw it in Vietnam and we are seeing it today in Iraq.”

Alexander Cockburn is an editor of radical US webzine Counterpunch. Go to www.counterpunch.org

US caught in a vice 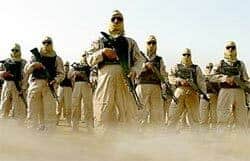 Who is controlling the death squads in Iraq?