This article is over 15 years, 8 months old
The success of the popular rebellion in Nepal has drawn renewed attention to Maoism. Henry Maitles traces the history of Maoism and its relationship to classical Marxism
Downloading PDF. Please wait...
Saturday 20 May 2006

The political crisis in Nepal has focused the attention of the Western media on Maoism for the first time in decades. An avowedly Maoist organisation – the Communist Party of Nepal (Maoist) – has led an insurgency which holds most of the countryside and is within an ace of toppling the autocratic king.

What has been noticed rather less is the increased influence of Maoist currents across South Asia right now.

Maoist groupings are influential in a number of Indian states, from Bihar to West Bengal and Andhra Pradesh. In the Philippines, the New People’s Army is leading an armed struggle and growing in strength.

It is important for us to understand that these groups are fighting oppressive and violent regimes. They are seen by the local population as freedom fighters. They do have genuine support.

But what exactly do Maoists stand for? The first thing to be said is that most groups that call themselves Maoist now have no relationship with the Communist Party of China. Indeed, they tend to believe that Mao Zedong’s ideas were betrayed by the Chinese leaders before they could be fully or properly implemented.

As the Economist reported, China is “gloomy about the news from Nepal”. Its leaders fear that the Nepalese Maoists may destabilise the monarchy there and lead to difficulties with China’s new economic friends in the West.

Conversely, most Maoists outside China see the Chinese government’s reworking of Maoism as little more than an ideological justification for the “capitalist road” taken by the regime’s post-Mao economic policies.

Second, unlike classical Marxism as developed by the Russian revolutionaries Lenin and Trotsky, in which the urban working class was seen as the main source of revolution, Mao focused on the peasantry as the revolutionary force which, he said, could be mobilised by a Communist Party with “Marxist knowledge” and leadership.

The model for this was the Chinese Communist rural insurgency of the 1920s and 1930s, which eventually brought the Communist Party of China to power in the late 1940s. This was a clear departure from Marxism, in that it mobilised peasants rather than workers.

Some commentators claim that socialist and Communist parties ignored the peasantry during the period of revolutions in the aftermath of the First World War.

This is not true, but it is the case that socialists give priority to the urban working class. That is because workers have a collective response to social injustice and oppression, and so tend to develop a collective consciousness. The peasantry, in contrast, tends to develop individualist responses, usually around the demand for land.

It is not that Marxists have a rose tinted vision of workers, but rather that their collective experience of work and struggle develops them into capitalism’s gravediggers. Of course struggle does not necessarily break out in centres of urban industry. But one of the roles of the revolutionary party is to involve the working class in the struggles.

A third difference is that Marxists argue that large scale industrial development is a positive insofar as it creates a force that has collectivity as its centre – the working class.

Maoism, on the other hand, tends to make rural development the priority as a strategy for national liberation. Maoism typically holds to a “stages” strategy – first, national liberation, then at some stage in the future, social revolution. Naturally, this vision has limited appeal to workers in towns and cities who see social change as the key priority now, not in some undefined future.

In China, Mao felt that this strategy was essential during the early stages of socialism in a country where most of the people were peasants. The effect was to turn a short term necessity into a long term virtue. Maoism’s emphasis on rural development reached its nadir in Cambodia in the 1970s, where Pol Pot violently depopulated the cities in a mass return to the land.

Fourth, and following on from this, Maoists believe the peasantry (with or without support from the urban working class) can be mobilised to undertake a “people’s war” of armed struggle involving guerrilla warfare.

This guerilla war itself takes three stages in Maoist theory. The first involves mobilising and organising the peasantry. The second involves setting up rural base areas and increasing coordination among the guerrilla organisations. The third stage involves a transition to conventional warfare.

Maoist military doctrine likens guerrilla fighters to fish swimming in a sea of peasants, who provide logistical support to the fighters. The working class does not figure in this strategy, except as a supporting stage army that welcomes the guerrilla peasant army into the towns.

There is a historical reason for this theory. China’s Communist movement in the 1920s embarked on a strategy of national liberation involving alliances with “progressive” capitalists. The consequent defeat of the 1925-7 Chinese revolution saw these “progressive” capitalists change sides and organise a terrible and brutal clampdown on the Chinese working class.

This convinced Mao and his colleagues to effectively abandon the towns and put their faith in a peasant movement.

A fifth feature of Maoism is its voluntarism – the idea that people can overtake material circumstances through force of will. This was epitomised by fables from Mao such as humans moving mountains over centuries by hand. Such stories can seem revolutionary, but in practice they lead to a kind of collective decision to share poverty rather than overcoming it.

There is thus something romantic about the whole notion of Maoism – a group of self sacrificing individuals organise the countryside to sustain a guerrilla army, involving great personal sacrifice and strong will, which overthrows a corrupt and brutal government.

This romance reached its mythic peak during the “long marches” of 1934-5 when the Chinese Communists, undertaking incredible hardship and sacrifice, fled from a concerted attempt to annihilate them to set up rural bases in the north of the country.

When Maoist movements manage to inflict a military defeat on the existing regime they organise a government which sets itself up to withstand a hostile world and its dangerous and material influences. This often leads to the development of a “cult of personality”, in which the prowess and powers of “the great leader” is extolled. Examples of this include Mao in China, North Korea’s Kim Il Sung and Albania’s Enver Hoxha.

Yet the reality is far from this picture. It is not necessary to believe all the excesses of Mao and Maoism as described by Jung Chang and Jon Halliday in their recent book on Mao to understand that in order to sustain war, a military discipline has to be imposed. The peasantry often has to be brutally forced to support what the party sees as their best interests.

This carries on into the regime itself once the old order has been overthrown and has to be even more strongly imposed in the towns. This in turn leads to extraordinary actions being taken to isolate the population from the evil influences of capitalism.

I remember on a trip to Albania in the early 1970s being stopped at the border and my dangerous flared jeans, flowery shirt and long hair being dealt with – the first two confiscated and the last cut. The explanation was that these decadent capitalist influences had to be kept from the population.

Maoism has an appeal among those struggling for national liberation. The Maoist fighters can be exceptionally brave and committed.

But the basis for the new society is born out of the old – that’s why socialists place such emphasis on the collective struggle of the oppressed and the working class.

What’s clear is that capitalism and its gravediggers are now spread around the world. The social movements in, for example, Latin America have workers at their core. The anti-capitalist movement worldwide has an orientation on trade unions – not its only focus, but an important one nevertheless.

In contrast to those who tell us that the working class is dead, there have never been more workers worldwide – indeed China is at the forefront of this. The level of struggle and strikes is developing even in those countries such as Britain and France where its death was most forecast. Thus, all over the world the conditions for social – as opposed to merely national – liberation is at hand. That is the future.

Henry Maitles is head of curricular studies at the University of Strathclyde’s faculty of education.

Italy – can the party last? 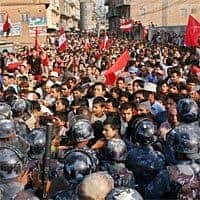 Nepal: revolution at the crossroads