Marxism 2012: Debates and discussion on the eurozone crisis

This article is over 9 years, 6 months old
The crisis in the eurozone was one of the recurring themes at last week’s Marxism festival.
By Dave Sewell
Downloading PDF. Please wait...
Tuesday 10 July 2012

The crisis in the eurozone was one of the recurring themes at last week’s Marxism festival.

“When Marx wrote that all that is solid melts into air, he couldn’t have believed what is happening in Europe today,” said Maria Stylou of the Greek Socialist Workers Party, SEK. “This is a system that the ruling class can’t control.”

The crisis in Greece and Spain has attracted enormous attention, but no country in Europe has been spared. Richard Boyd Barrett, a socialist MP from Ireland, explained the scale of the devastation there.

“There are 400,000 children below the poverty line—in a country of just 4.5 million,” he said. “Public sector workers have had their wages cut by 15 to 20 percent, and there is massive overcrowding in hospitals after cuts and closures.

“They say we’re the good boys of Europe, that we’re not going to be like Greece. But things here would be a hell of a lot worse than Greece if it weren’t for the 200,000 people who have left the country.”

Max von Lingem from the Netherlands said, “We’re finding that things can change very quickly. We’re moving from the ‘core’ of the eurozone to its ‘periphery’. Already our government has collapsed under the pressure to come up with an austerity budget.”

Egyptian economist Samir Amin explained how the crisis appeared from outside Europe.

“The European project came out of the Marshall plan after the Second World War, when the US wanted to build an associate subordinate capitalist power,” he said. “At every step it has been a building block of capitalism—and a negation of democracy.”

Samir argued that the different levels of development inside the European Union meant that it couldn’t be compared to the US. For him it is more like the Americas as a whole, with “peripheral” countries dominated by a strong “centre”.

In particular, this role has been played by Germany. Stefan Bornost, editor of the Marx 21 magazine in Germany, said, “People ask me why German chancellor Angela Merkel is behaving the way she is.

“The German ruling class wants to complete a project that was first raised in 1871—establishing a European capitalist bloc under German hegemony.

“But it can only do this if the ruling classes of Greece, Spain and other countries succeed in defeating the working class to impose austerity.”

And it was to the possibilities for working class resistance that the rest of the discussions turned.

Andy Durgan is an historian and activist from the Spanish socialist organisation En Lucha. “Unemployment is soaring to 25 percent and there are 170 home evictions every day,” he said. “But on 15 May 2011 everything changed, with a movement of young people that exploded onto the streets.

“You could see the spirit of 15M on the second general strike earlier this year, against the harshest labour reforms since the Franco dictatorship. There were mass demonstrations and people were chanting new slogans like ‘the revolution starts here.’”

Richard said that in Ireland union leaders tied to the Labour Party had held back workplace struggles. The party is the junior partner in an austerity government. But he said there had been “one of the biggest civil disobedience campaigns in the state’s history” over a household tax.

The “troika” of the EU, European Central Bank and International Monetary Fund is demanding the tax. “Europe’s rulers are lurching from summit to summit, looking over the abyss and seeing the prospect of their whole project falling apart,” he said.

“But ordinary people can see austerity and the struggles against it taking the same forms across Europe. The possibility of building an internationalist working class response has never been better.”

Maria concluded, “The first general strike opened the door to everything else that has happened. It was what workers had to see to understand their own power.

“Now we’ve seen tremendous change in Greece. Ideas have been turned upside down. But everything started when workers started to fight.” 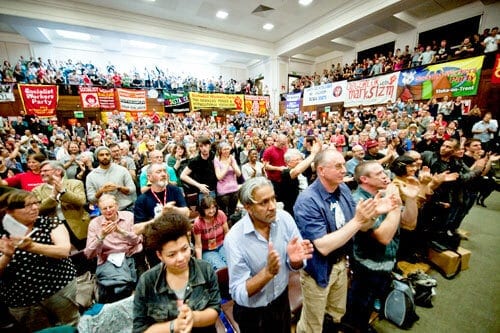 Marxism 2012: Festival of ideas brings our struggles together