This article is over 18 years, 3 months old
David Edwards is the co-editor of the MediaLens website. He spoke to Socialist Worker about the role of the media during and after the war on Iraq
Downloading PDF. Please wait...
Saturday 27 September 2003

WHAT WAS staggering before the war was how the media failed to ask even obvious questions about US and UK government claims about Iraq and weapons of mass destruction. Scott Ritter, the chief weapons inspector, claimed that by December 1998 Iraq had been ’90-95 percent’, that is ‘fundamentally’, disarmed. That was one thing almost never discussed. Another was that when the inspectors left Iraq in December 1998 they were pulled out by the UN. Yet Tony Blair, Jack Straw and the rest of them said the inspectors were kicked out. And they were almost never challenged by the media, who parroted that same line.

Fairness and Action in Reporting in the US took ten examples from different media in 1998, where they all said the inspectors had been withdrawn. They then checked in 2002 and 2003, and the same outlets, like the Washington Post, said they’d been kicked out.

During the war things became even worse because of an agreement that while troops are under fire it’s our patriotic duty to support them. All political and journalistic dissent dried up. The only people who were reporting honestly were people like Robert Fisk and John Pilger. The media basically supported the war. There was minimal coverage of the destruction to Iraqi civilian society.

There were endless mentions of the way that Saddam Hussein had run down society, and that things were chaotic because of his abuse of power. There’s truth in this. But there was no mention of the role of our sanctions in killing one million Iraqis. These sanctions were declared genocidal by Denis Halliday and Hans von Sponeck, the UN’s humanitarian coordinators in Baghdad. What’s been amazing for me is the coverage of the situation of civilians since the war ended.

The week after Baghdad fell the Red Cross reported that 32 out of 35 hospitals in Baghdad had shut down because of looting and violence. There was no mention of what happened next.

In May it came out that Umm Qasr had one hospital with 12 beds catering for 45,000 people with no painkillers. That wasn’t covered in the press. Robert Fisk estimated two weeks ago that about 1,000 Iraqi civilians are being killed every week. And yet on the BBC news, correspondent Ben Brown talked happily of a ‘consumer boom’ in Iraq.

We’re getting tiny mentions of the suffering. The reality of what we’ve done to Iraq, and Afghanistan, is being completely buried. The media is of the establishment, and serves the establishment. The chairman of the BBC, Gavyn Davies, is close friends with Tony Blair and Gordon Brown. He was chief economist at Goldman Sachs. He’s estimated to be worth about £150 million.

You have big business moguls in the corporate media, and you have got government appointees in the public service media like the BBC. There are all these pressures from the government, big business and advertising. The Cardiff University Report said in July that ‘the BBC displayed the most pro-war agenda of any broadcaster.

‘Over the three weeks of conflict 11 percent of the sources quoted by the BBC were of coalition, government or military origin, the highest proportion of all the main television broadcasters.’ Andrew Burgin, the press officer of the Stop the War Coalition, said, ‘Representatives of the Coalition have been invited to appear on every TV channel except the BBC.’

MediaLens tries to compare the corporate media’s version of events with authoritative opinion and sources we feel have been neglected. We’ll analyse an article in the Guardian, show what they’re ignoring, and argue against their version. We’ll send our arguments to the journalist and invite them to reply.

We want to encourage people to challenge powerful people in the media and politics. 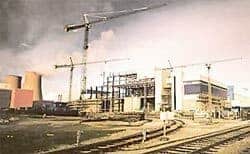 Say no to Labour’s nuclear nightmare

Deeper into the quagmire

‘The US is still running Iraq’