She sits in a £1 billion palace—the most valuable house in the world—surrounded by priceless crystal chandeliers and furniture lined with GOLD. And you’ve paid for all of it.

Grandmother-of-eight Queen Elizabeth II has made a career out of having kids and getting the state to fund them.

But that hasn’t stopped her raking in more than £450,000 a DAY to fund her lavish lifestyle.

We’re all paying for her sponger clan’s luxury lifestyle—and now they want us to cough up for a WEDDING too.

Liz’s grandson William and his girlfriend Kate Middleton plan to spend a massive £100 million on the big day—and they want you to foot the bill.

William proposed to Kate last year while they were enjoying a luxury holiday in Kenya—at our expense.

He has been claiming handouts since he left college six years ago—even though he has a sneaky job on the side as a pilot.

When he proposed, William managed to produce an engagement ring worth £32 MILLION.

“It’s a sapphire with some diamonds,” he boasted.

In a depressing portrait of “Broken Britain”, he admitted to wanting kids of his own—so he can coin in even more of our cash.

“Obviously we want a family so we’ll have to start thinking about that,” he said.

He has already spent thousands on a secret stag party.

And Kate was caught parading up and down the posh King’s Road last week splashing our cash.

The only proper job she’s ever had was part-time in clothes shop Jigsaw.

But she gave it up four years ago, saying she needed “some time to herself”.

Despite refusing to get a job like everyone else, the family can afford to book up the whole of London’s posh Goring hotel.

Kate’s family and friends will spend the night before the

wedding living it up in its expensive rooms—at your expense.

Roads across London will be forced to close as the sickening spongers joyride to the ceremony—in PRICELESS carriages.

They’ll say “I do” in the ornate Westminster Abbey.

And after that they have invited hundreds of their sponger friends back to their pad to live it up and scoff expensive food.

More than 20 chefs will serve TEN THOUSAND canapes to their guests—including smoked salmon on beetroot blinis and quails’ eggs.

Edward Griffiths, who is helping to organise the wedding, said guests will be handed champagne “from the moment they arrive”.

Then they plan to party late into the night—turning their state-funded mansion into a nightclub, complete with DJ, dance floor and a cocktail bar.

Kate has a taste for pina coladas, while more experienced drinker William prefers a vodka cranberry.

They’ve invited 300 to the all-night rave.

A source says: “William and Kate have been working on a playlist… they want some cheesy songs during the night.”

“It’s about enjoying myself as much as I can,” boasts William.

As they celebrate, they will proudly show off their “benefits heaven” home, STUFFED with expensive gear.

The wedding reception will spread across multiple rooms, but the focus will be in their paintings gallery—full of works by Canaletto, Rembrandt and Rubens.

Jennifer Scott, who gets paid thousands just to look after the pictures, says the rooms “drip with opulence”.

She adds: “They really are intended to make people think ‘Wow, this is an incredible palace.’

“This is a palace that was intended to impress.”

And at the centre of it all will be not one but TWO enormous wedding cakes.

The biggest cake, a multi-tiered monster, has taken two months to make—and it weighs more than a sumo wrestler.

After the wedding they’ll no doubt go on an expensive honeymoon, perhaps to their favourite Caribbean island resort, Mustique.

There they like to relax in an ultra-exclusive £2,000-a-night cliff-top villa—complete with its own pool, a team of staff and a private BEACH.

They once managed to go on two holidays to the plush resort in the space of a month. A pal said they had “the time of their lives”.

It’s all in a day’s “work” for these royal scroungers.

She’s the queen of spongers

The “queen of the spongers” lives with her layabout husband Phillip. He hasn’t worked since 1951.

Her four kids and eight grandkids have all been paid for by you and me.

But while the rest of us feel the pinch, the government keeps generously rewarding this sickening bunch for not lifting a finger.

“Royals have roles, not jobs,” a pal of Prince Andrew explains. In other words they don’t have to do a stroke of work unless they feel like it.

The “Civil List” scam alone nets the family £40 million a year—but once all the handouts are added up, the total is £180 MILLION.

You’d think the 1,000‑room Windsor Castle would be enough for anyone. But Liz has splurged on 12 massive homes.

And still these jobless royals complain that they don’t get ENOUGH. The queen has told pals that she wants even more cash.

“The queen, without any shadow of a doubt, needs substantially more money,” whined Tory friend of the royals Edward Leigh.

The government pledged to abolish the potty payouts—but then revealed it would just replace them with “Sovereign Support Grant” handouts.

The queen even tried to claim a poverty benefit to heat her mansions—demanding £60 million of energy grants aimed at people on low incomes.

A neighbour said: “They are all take, take, take. It’s disgusting.

“The system has gone seriously wrong when one family is costing us so much.”

‘He is everything I despise–he’s black’

William’s brother Harry infamously revealed his political sympathies when he went to a party dressed as a NAZI.

He claimed it was just a “joke”—but he has since been caught calling people “Pakis” and “ragheads”.

Prince Phillip, the grandfather of the scrounger clan, is also an infamous RACIST.

He once told some students in China they’d go “slitty-eyed” if they stayed.

And meeting a black man from Birmingham, he asked, “What exotic part of the world do you come from?”

Racism is a royal family tradition that goes back generations.

More recently, the queen’s sister Princess Margaret even walked out of Schindler’s List in the first few minutes—calling it “a tedious film about Jews”. She advised her butler not to see it.

“I don’t want to hear another word about Jews or the Holocaust,” she said. “I heard enough during the war. I never want to hear about it again. Ever.”

When she met the president of Guyana, she said, “He’s everything I despise—he’s black and he’s married to a Jew.”

The wedding will be a get‑together for some of the most dangerous families in the world.

Prince Salman of Bahrain had accepted the invite—he pulled out just hours before he was due to fly to London.

Bahrain has launched murderous crackdowns on protest in recent weeks.

But Prince Mohamed of Saudi Arabia, which has helped Bahrain massacre protesters, is still coming.

And prime minister David Cameron will be there to greet him.

He’ll be wearing his full toff tails—perhaps because William’s old Eton housemaster Dr Andrew Gailey will be there to tell him off if he doesn’t.

What you bought ’em

Does a monarchy make a difference? 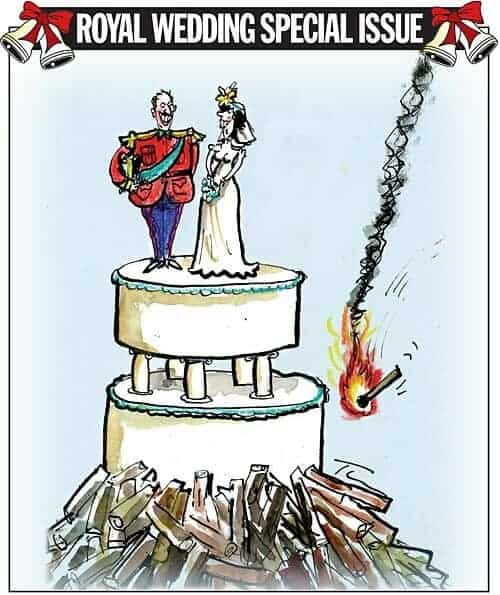 Royal wedding: a match made in heaven!