This article is over 9 years, 8 months old
Eamonn McCann on the Olympics that saw repression breeding resistance
Downloading PDF. Please wait...
Tuesday 22 May 2012

The Mexico Olympics opened on Saturday 12 October 1968. I know the date because it was exactly a week after the 5 October civil rights march in Derry, generally accepted as the day the Troubles in Northern Ireland started.

The association of the Derry march with the Mexico Olympics has been firmly fixed in my mind ever since due to the intervention of hunger striker Mickey Devine.

The 1968 Olympics were politically charged from the outset. A mass student demonstration on 2 October in Mexico City had set the stage for Tommie Smith’s and John Carlos’ gloved-fist salute.

The student protest was against the military occupation of the National Polytechnic Institute (NPI)—and the military’s response was murderous.

The BBC described the atmosphere at the opening ceremony as “unbearably tense”. There was a huge sigh of relief when the moment passed without disruption. The fear had been that the student deaths would prompt attempts to cancel the games.

More than 40 years later, it is still not known how many were murdered on 2 October. It was certainly scores, some say hundreds.

It is remarkable that many otherwise estimable accounts of the global student movement of 1968 entirely leave out the Mexico massacre.

But it was well enough marked at the time for Mickey Devine to interrupt my speech in Derry with a shout of, “What about the Mexican students, McCann?”

The games offered an opportunity to expose the rottenness of the government of Gustavo Díaz Ordaz. The regime was well prepared. In September Díaz Ordaz had ordered the army to occupy the NPI, regarded as one of the prime centres of student militancy.

All lectures and meetings on the campus were cancelled. Students who refused to leave quietly were battered out of the buildings.

Demonstrations demanded the removal of the military and the re­opening of the Institute. They drew thousands of trades unionists and community activists onto the streets alongside the students.

An estimated 15,000 students and others gathered in the afternoon of 2 October. They intended to march through a working class suburb and onwards to the Institute. But as the crowd milled around, soldiers and paramilitary police in armoured vehicles took up positions surrounding the square.

He claimed they had come under fire from within the crowd and from snipers in buildings, and were forced to fire back in self defence.

Many of the casualties, he insisted, had been struck in crossfire during a 90-minute “gun-fight”.

But eyewitnesses were adamant that within seconds of arriving in the square, soldiers had disembarked and begun firing without warning.

Some accounts are unnervingly similar to descriptions of the British Paras’ erupting into a civil rights demonstration in Derry’s Bogside on Bloody Sunday three and a half years later.

It wasn’t until the release of Mexican State papers in 2000 that it was confirmed that the government had deployed snipers.

In 2003, documents published by George Washington University revealed the CIA’s involvement in the killings. Its “station” in Mexico City had been directly involved in planning and supplying weapons for the attack on students.

Coverage of the massacre in the Western media focused more or less exclusively on the ramifications for the games. The reaction given most prominence was that of the International Olympic Committee. Its boss, Avery Brundage, maintained that the killings had nothing to do with the “non-political” Olympics.

In fact one of the chants of the crowd had been, “No queremos olimpiadas, queremos revolución!” or, “We don’t want Olympics, we want revolution!”

These were the events Mickey Devine had in mind in Derry three days later. He was eventually to become the last of the hunger strikers to die, in August 1981. In 1968 he was only 15. Still, as he was to recall, “My whole way of thinking was tossed upside down at that time.”

Mickey was born in Springtown Camp on the outskirts of Derry, a former US base where homeless Catholics squatted when GIs were withdrawn after the Second World War.

He had a hard upbringing. Tin huts for accommodating soldiers made unsuitable family homes. Services were effectively non-existent.

Mickey’s father died when he was six. He was ten when he found his mother dead. He was raised by his only sibling, a sister seven years older. It was very unusual in the Catholic working class not to come from a large extended family. This may be one of the reasons Mickey took to hanging out at an early age with fellows a few years older.

One of these was Red Mickey Doherty from the Bogside, a stalwart of the Derry Labour Party and one of the key instigators of the civil rights movement.

The first time I remember being aware of Mickey was as I clambered onto a chair to make a speech at the 5 October demonstration. About 500 of us had surged a couple of hundred yards from the rallying point at the station up to the mouth of Duke Street.

We were heading for the city centre but found the way blocked by a phalanx of riot police. Behind us, more police moved in. Unable to go backwards or forwards, we milled around until someone produced a loudhailer and debate began on what to do next.

The first few speeches were made by “moderates”. They hit out at the Unionist government and condemned the police before congratulating every­one on having “made our point” and telling us we should go home.

The problem with this was the difficulty of going anywhere when we were hemmed in on all sides. Nowadays we might call it “kettling”.

As the crowd became restive, I was urged to take the loudhailer by those who wanted a different direction. The front ranks were shoving harder against the police line. The cops were snarling louder. I had no clear idea what to say for the best.

That’s when I heard him. A small figure with a chubby face and rounded glasses. “What about the Mexican students, McCann?” he shouted.

Taken aback, I hesitated. He shouted again. “What about the Mexican students?”

His point was simple. If students in Mexico could stand up for civil rights in the face of murder then surely we were not going to slink away from confrontation in Derry.

I am not sure what I would have said had Mickey not intervened. But, anyway, I made a speech which the courts later characterised as ­incitement to riot.

From the plaza to the Bogside

What happened on 5 October 1968 in Derry sent the narrative of Northern Irish history spinning in a different direction.

By August the following year, the Bogside had effectively seceded from the state. British soldiers had replaced the Royal Ulster Constabulary patrolling the edges of the area.

By the end of 1970, under pressure of events, the IRA had split. Both groups that emerged, Officials and Provisionals, were recruiting steadily.

Mickey had joined the Young Socialists after 5 October but now, along with Red Mickey, he switched to the Officials.

The following year he broke away to form the Irish Republican Socialist Party and its armed wing, the Irish National Liberation Army (INLA).

This wasn’t an uncommon political journey in the period. Most of the ex-Young Socialist contingent did the same.

Mickey was arrested in 1977 and sentenced to 12 years for possession of guns with intent. He refused to wear a prison uniform and went “on the blanket”.

In 1979, he joined the “dirty protest”. When the INLA leader in the prison, Patsy O’Hara, died on hunger strike on 22 June 1981, Mickey volunteered to take his place.

He died 60 days later, on 20 August, aged 27. The hunger strike was called off the following day.

Red Mickey and others among us from the class of ’68 spoke at his wake. We spoke at length on occasions afterwards about the terrible sadness of Mickey’s death and whether it had been worth it.

We never reached a consensus.

But I inadvertently chanced on an indication that it hadn’t all been for nothing a week or two later, reading a column in a socialist newspaper.

It featured news snippets from around the world: “Sydney: Bus strikers vote to stay out,” “Pretoria: Cops open fire on township protest,” that sort of thing. And there it was: “Mexico City: Students gather for tribute to Irish hunger striker Michael Devine.”

The London Olympics “will bring the world together”, says Lord Coe. And maybe so, in an ersatz way.

But what unites us in the depths of our being are the things we fight for together, even when we are but dimly aware of the common cause transfiguring our struggles. 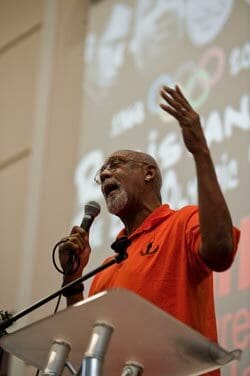