This article is over 18 years, 6 months old
Bosses are relying on racist laws against migrant workers to treat them far worse than their British counterparts
Downloading PDF. Please wait...
Saturday 26 July 2003

FAR FROM being a drain on the economy, workers from abroad keep key industries and services in Britain going. The Royal College of Nursing (RCN) showed last week how some parts of the NHS would ‘cease to function’ without nurses from South Africa and the Philippines. Guardian journalist Felicity Lawrence has uncovered how ‘in food processing there is a hidden army of labour on whom we all depend’.

Workers from the poorest countries are used to fill labour shortages in areas dominated by low pay, long hours and backbreaking work.

Many are here legally, supplied by an agency or through government schemes. It should entitle them to basic rights like the minimum wage. But it doesn’t. The RCN warned that nurses from abroad are being used as slave labour in private care homes. Some employers seize their passports and threaten to deport them if they complain.

In other industries like agriculture and food processing companies use ‘gang masters’ to supply cheap labour. These gang masters get rich off vulnerable migrant workers, some of whom are forced to work illegally.

Felicity Lawrence’s account of migrants’ life in Britain, given to a recent TUC conference on the issue, is a far cry from the ‘soft touch’ myth peddled by the Daily Mail. She explained:

‘Two years ago I went undercover in a chicken factory. That meant standing in a freezing shed for half the night. The workforce was a revelation. It was humbling. There were 18 nationalities employed. It was an atlas of world conflict, which explains why people move around. After that article was published I had dozens of calls and tip-offs about other places. I have visited many factories, farms and packhouses. The workers are grotesquely exploited in many cases. I overheard farmers in East Anglia telling jokes about the dangerous situations migrants are in – how one Bulgarian was on a tractor, with no training, and crashed it.

‘The next morning I turned up unannounced. I went straight to a packing shed and there were 28 Iraqi Kurds. Khaled came from Kirkuk, which ironically we were about to bomb at the time. He acted as their spokesman. He said they came from Peterborough and travelled for an hour a day. They were charged £25 for accommodation even though there were four to a room. They had to pay tax and insurance even though they were illegal workers. So they were getting £3.50 an hour for 12-hour shifts. With the travelling that is 14 hours all round. Operation Shark, involving several government departments, earlier this year found that more than half the workers preparing fresh food in factories and packhouses in Scotland for the big supermarkets are working illegally. It is happening in the Vale of Evesham, Sussex, Great Yarmouth and East Anglia.

‘There are dozens of minibuses each day, leaving at 4 or 5am. Many of these minibuses are clapped out, and there are accidents like the one on the railway line in Worcestershire where three died. The companies who employ them just have to be aware of what’s going on. But they devolve responsibility to gang masters. It’s very hard to bring the gang masters to account. Migrants have told me about gang masters with a Kalashnikov to keep order or a Stanley knife to stop them going to the authorities.

‘Globalisation and the disparities in wealth between developed and underdeveloped countries have driven the rise in migrant labour. And also the way supermarkets have just in time production. This means there can be an order quickly and the workers will go on until 1 or 2am to fulfil the contract. Tesco made £1.4 billion pre-tax profit. They could offer to pay people more. But the people with the fewest rights are getting squeezed.’

No money to get out

Stepan Shakhno contacts fellow Ukrainian workers in Britain as part of research for the TUC. He says: ‘Workers pay $2,000 to $4,000 to an agency in the Ukraine. Very often they are dropped off at Victoria station with no job. People end up on building sites or agriculture. Usually they are here legally as part of the government’s Seasonal Agricultural Workers Scheme.

‘But their rights are still abused. One of the people I interviewed was promised £2 for every box of strawberries they picked. They worked like crazy, picking twice as much as was expected. So the employer lowered the price from £2 to 50p a box. People have paid so much money to get here and are charged for living in huts and transportation. They cannot afford to leave.’

They want to be in a union

by Nuno Guerreiro from the Portuguese Workers Association

Portugal is in the European Union. So Portuguese workers are free to enter Britain, as British workers are free to enter Portugal. They are recruited from an agency in Portugal with the promise that Britain is wonderful. They are conned to come here. They discover that is not true. The vast majority go into meat processing factories. That’s long hours in freezing conditions.

They are forced to work whatever hours the employer wants. The supermarket can make demands on a factory very suddenly, so the existing workers have to do more – 14, even 16 hours a day. You know, when these employers say if we don’t get cheap workers we will leave the country, it’s not true. These factories have to provide ready meals on the spot -they can’t move to Thailand!

The workers are tied to agency housing. In a house with three or four bedrooms there are four people in each room. They pay £35 to £50 a week. So the agencies are making a killing on rent too. Any protest and you are sacked. You have 24 hours to leave your room. When the workers arrive here they sign a document, written in English, saying they are self employed. They have no rights whatsoever.

The agency pays cash, with no payslips. If they have an accident at work the agency distances themselves from them. People say such workers are here, taking jobs. But they do the jobs no one else wants.

Trade unions need a strategy for recruiting migrant workers. We need more rights for every worker – whether they are born here or immigrants. In Ellesmere Port an agency brought in a worker for six months and charged him £400 for his flight.

After six months he said he wanted to stay, and the agency said he had to pay another £400 as if he was coming here again. He did not sign that contract and was sacked. His 80 colleagues walked out in a spontaneous strike.

The company lost production for a night and reinstated the worker. At a Bernard Matthews factory in Norfolk with 550 workers, all are Portuguese. Everyone has joined the TGWU. This was after a leaflet was put in asking people to come to a nearby hall if they wanted to join a union.

These workers were legal, but the employers went round their houses threatening if they joined they would be sacked and thrown out of their housing. But around 40 to 60 people came. They have built the union. There are results immediately.

They got rid of the tied housing and got a 60p an hour rise. ‘One migrant worker was sacked for refusing to give his bosses £400. His 80 colleagues walked out in a spontaneous strike’

Who were the Blackshirts? 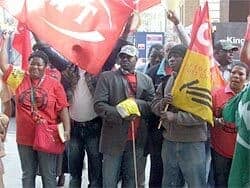