Negri’s autonomist ideas misses the need for a strategy

This article is over 12 years, 2 months old
The first column in our new series on radical thinkers today looks at the ideas of Antonio Negri
By Jonathan Maunder
Downloading PDF. Please wait...
Tuesday 10 November 2009

In March this year over 1,000 people, a large number of them young students, attended an academic conference on “The Idea of Communism” in London.

Against the backdrop of the economic crisis, the conference asserted the relevance of Marxism and gained significant media attention.

It confirmed the re-emergence of Marxism at the cutting edge of radical theory, and the influence of a group of key thinkers—Antonio Negri, Alain Badiou and Slavoj Žižek.

Each of these theorists has gained an audience over the past few years among people who are looking for radical ideas and who want to challenge the system.

In these columns I will try to assess how useful their ideas are in the struggle today.

Antonio Negri is probably best known as the co-author, with Michael Hardt, of the book Empire. He has a long record of activism and involvement in the radical left in Italy, stretching back to the 1970s.

At the core of Negri’s ideas is a particular view of the relationship between labour and capital.

Karl Marx discussed the way the working class could become aware of its power and so become convinced of its ability to transform society. But he recognised that there was nothing automatic about this process.

Negri subverts this conception. In his early writings he views the working class as anti-capitalist by its very nature.

He argues that, as the working class is the only class that exists through labour, it inherently expresses creativity and human desire, and is therefore the real productive force in the world.

Capital is a secondary response to this productive force, trying to capture its vitality and life for its own ends. As he has argued, “the working class is subjectivity, separated subjectivity, which animates development, crises, transition and communism”.

More recently, in books such as Empire and Multitude, Negri replaces the working class with the broader and vaguer term “multitude”.

This reflects Negri’s belief that we live in “post-industrial” societies dominated by more creative and inter-personal forms of labour, which capital has been forced to adopt by our inherent power.

But this effectively removes any real notion of class struggle from Negri’s theory. He recently wrote, “The revolutionary rupture has already occurred. The multitude is everything, capitalist power nothing.”

The practical conclusions of Negri’s ideas ultimately provide little help in trying to construct a radical opposition to the system today.

In the first place, his idea that capitalist crisis is “animated” by the struggle of the “multitude” cannot explain the current economic crisis.

If it were true, then in the US, the country at the core of the crisis, capital would be on the defensive.

But the opposite is true. The US ruling class has over the last 30 years succeeded in boosting profits, taming unions and increasing working hours.

In order to understand the current crisis, it is necessary to factor in a dynamic of capitalism which Negri consistently ignores. This is the chaotic and unplanned “horizontal” competition between different capitalists to grab an increasing share of profits, which interacts with the “vertical” struggle between capital and labour.

Negri’s view of “the multitude” as inherently creative, and capital as a reaction to this, means he is blind to the continuing reality of capitalist exploitation of labour power.

While labour does create all the products, machines, and services which the capitalists rely upon to make profit, it is the capitalists who remain in control of what is made, and how it is made.

The consequence—sacrificing everything to profit—is catastrophic for humans and the planet.

This is what Marx meant by “alienation” under capitalism—the process and products of human labour escape from the control of the direct producers.

To create a world where human labour really is liberated, the bosses’ ownership over the means of production has to be challenged, and ultimately overthrown—through mass working class action.

Unfortunately, Negri’s approach provides little strategic orientation for this task—and can even end up implying that the battle is already largely over. 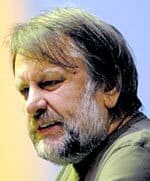 What force can solve Zizek’s antagonism?